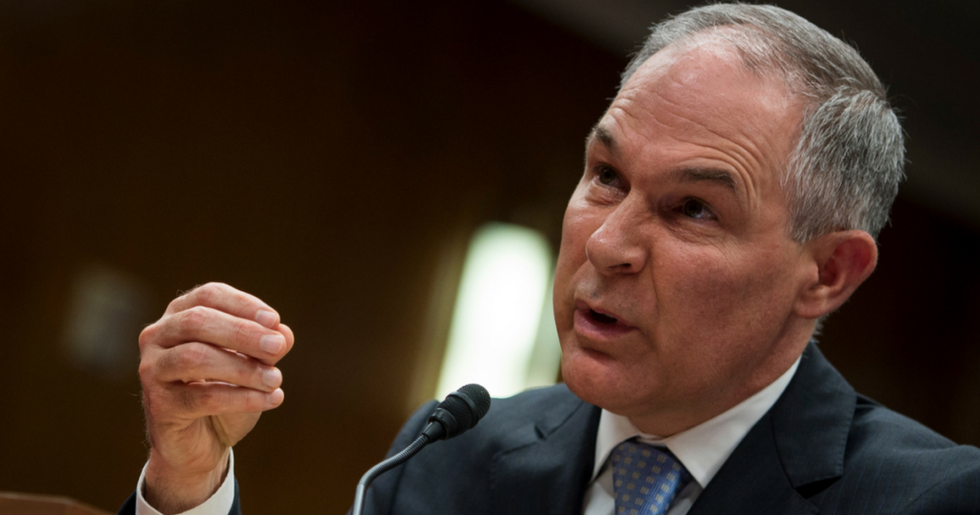 UNITED STATES - MAY 16: Environmental Protection Agency Administrator Scott Pruitt testifies during a Senate Appropriations Interior, Environment, and Related Agencies Subcommittee hearing in Dirksen Building on the proposed FY2019 budget for the EPA on May 16, 2018. (Photo By Sarah Silbiger/CQ Roll Call)

President Donald Trump accepted the resignation of embattled EPA Administrator Scott Pruitt on Thursday, announcing on Twitter that Pruitt "has done an outstanding job" and will be replaced by Deputy Administrator Andrew Wheeler beginning Monday.

I have accepted the resignation of Scott Pruitt as the Administrator of the Environmental Protection Agency. Within… https://t.co/sX31IwSZ01
— Donald J. Trump (@Donald J. Trump) 1530819477.0

Almost immediately, Noah Bookbinder, the executive director of government watchdog group Citizens for Responsibility and Ethics in Washington (CREW), issued a one-word statement summing up how many Americans feel about Pruitt's exit.

Twitter quickly joined in, with people voicing their hope that Pruitt's resignation won't mean the stopping the probes into his questionable actions as head of the EPA.

Trump also got trolled over Pruitt's resignation as Twitter users pointed out that Trump should have fired Pruitt long ago.

@DuszaLukasz @realDonaldTrump He accepted a resignation... he didn’t fire him like he should have ... many, many scandals ago...
— grandmanochickens (@grandmanochickens) 1530821221.0

Pruitt was confronted on Monday night at a D.C. restaurant by Kristin Mink - a mother, and teacher - who told him to "resign before your scandals push you out."

Pruitt is the subject of more than a dozen federal investigations into possible corruption and ethics violations involving his use of taxpayer funds for personal benefit.

Pruitt faces additional accusations of "enlisting aides to obtain special favors for him and his family, such as reaching out to the chief executive of Chick-fil-A, Dan T. Cathy, with the intent of helping Mr. Pruitt’s wife, Marlyn, open a franchise of the restaurant," reports the New York Times.

Pruitt is also being investigated for a sweetheart $50-per-night condo rental deal he had with a lobbyist, as well as "accusations that he demoted or sidelined E.P.A. employees who questioned his actions."

CREW has been one of the most vocal critics of Pruitt - last year, the group filed a Freedom of Information Act request demanding the release of Pruitt's travel records, which have come under scrutiny amid reports he used taxpayer funds to stay in fancy hotels and fly first class.

In April, the Government Accountability Office, another watchdog group, determined Pruitt broke the law when he spent $43,000 of taxpayer money on a soundproof phone booth for his office.

Last month, Senator Joni Ernst (R-IA) said Pruitt is "as swampy as you get."

He is about as swampy as you get here in Washington, D.C. and if the President wants to drain the swamp, he needs to take a look at his own cabinet.

But despite his public reputation of being the embodiment of "the swamp," which candidate Trump promised to drain if elected president, Pruitt's legacy of deregulation and anti-environment policies will last for generations.

Since his time as Oklahoma's attorney general, and as EPA Administrator, Pruitt has made a name for himself as being (in addition to the poster child of Washington corruption) one of the most rabid deniers of man-made climate change, despite overwhelming scientific evidence and near consensus among scientists that human activity is disrupting Earth's climate patterns.

Notably, Pruitt was instrumental in Trump's decision to pull the United States out of the Paris Climate Accord, which every other industrialized nation signed in 2015.

One of the main goals of the accord was to prevent global temperatures from increasing two degrees Celsius, a threshold that climate scientists have called a "point of no return" for the planet's climate.

Wheeler, Pruitt's successor, is a former lawyer and lobbyist for the coal industry who in June said he had "no interest" in becoming the EPA's boss.

“I could have put my hat in the ring for the administrator," Wheeler told the Washington Examiner. "I wasn’t interested in that. I am still not interested in that." And while Wheeler is expected to be a "by the book" type of EPA chief, the environmentally destructive and anti-scientific policies Pruitt championed are likely to continue.

"His career was built around quietly and incrementally advancing the interests of the fossil-fuel industry, chiefly by weakening or delaying federal regulations," the New York Times wrote on Thursday.

Wheeler is also a former chief of staff to Senator Jim Inhofe (R-OK), who, while serving as the chairman of the Environment and Public Works Committee, in 2015 famously brought a snowball onto the Senate floor in an attempt to disprove climate change.

"In case we have forgotten because we keep hearing that 2014 has been the warmest year on record," said Inhofe. "I asked the chair, do you know what this is? It's a snowball just from outside here. So it's very, very cold out. Very unseasonable."