He walked right into it. 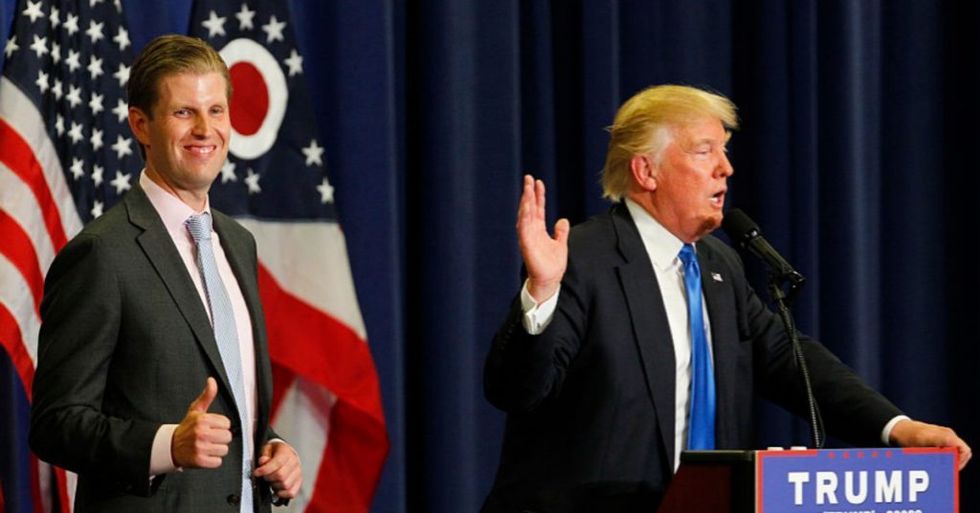 Donald Trump addresses the crowd as his son Eric Trump looks on during a campaign rally at the Sharonville Convention Center July 6, 2016, in Cincinnati, Ohio. (Photo by John Sommers II/Getty Images)

Eric Trump, 34-year-old Executive Vice President of the Trump Organization, failed to explain who or what he spoke of in his tweet.

While his father addressed loyalty in recent days—after one of the people President Trump gave a coveted $179,000 per year position at the White House released a tell-all book and disclosed making secret recordings of events at 1600 Pennsylvania Avenue—the younger Trump remains relatively unscathed from most of what happens in Washington DC.

While the President's second son never did clarify, the Twittersphere, being what it is, happily filled in the blanks.

And who is the most disloyal person in Eric Trump's life according to Twitter? It all came back to the same name over and over: Donald Trump Sr., his father.

Your father is disloyal to nearly everyone who is no longer useful to him....so I'm assuming this is about your dad. https://t.co/vVhPNSAmUn
— Kathy Griffin (@Kathy Griffin) 1534476132.0

@EricTrump Welcome to the resistance Eric. It must have been hard growing a dad like yours and seeing be repeatedly… https://t.co/o3asVyS8Gg
— Matty Scrape (@Matty Scrape) 1534509580.0

Most pointed out his father's problems with remaining loyal to his marriage vows.

@EricTrump Your dad cheated on your mom while she was home taking care of you as a little child! HAHAHAHAHAHAHAHAHA… https://t.co/AJDp31gJan
— David Beeler (@David Beeler) 1534476834.0

A few people pointed out that his father was not the only one with issues of loyalty to the marriage bond in the following tweets.

His brother Donald Trump Jr.—currently going through a divorce with his wife of 12 years and the mother of his own five children—faced accusations of infidelity as well.

Some pointed out, just in case the First (second) Son referred to those who exposed his father's words or actions, that telling the truth does not equal disloyalty.

While some pointed to the middle Trump son's own alleged loyalty or character failings.

@EricTrump This story about you and hookers and cocaine in Iceland is interesting, particularly considering you wer… https://t.co/LwkYkpq4XG
— Gomer (@Gomer) 1534511962.0

And some were just... mean.

@EricTrump As a member of the trump family, y'all don't have one loyal bone in your bodies. I still remember laughi… https://t.co/GmUEiJNTMA
— PunkyDaisy (@PunkyDaisy) 1534512175.0

@EricTrump You did actually put five words together, now you can have your cookie. You wold have got an A if you pu… https://t.co/SjwP2Y2MLk
— KevinLyman (@KevinLyman) 1534513645.0

he walked right into that one"