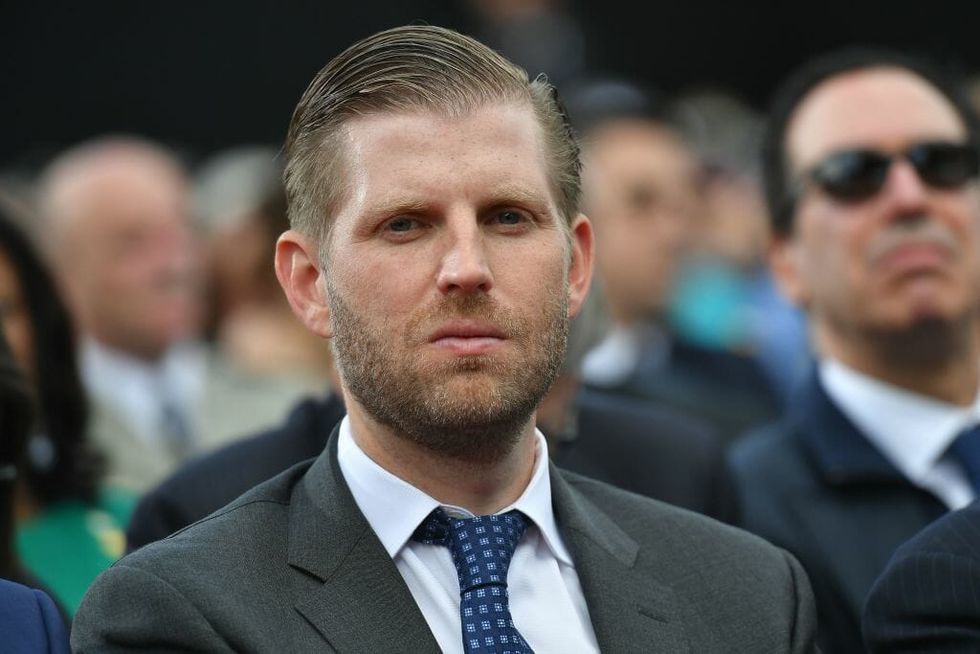 US businessman and son of the US president Eric Trump attends a French-US ceremony at the Normandy American Cemetery and Memorial in Colleville-sur-Mer, Normandy, northwestern France, on June 6, 2019, as part of D-Day commemorations marking the 75th anniversary of the World War II Allied landings in Normandy. (Photo by MANDEL NGAN / AFP) (Photo credit should read MANDEL NGAN/AFP/Getty Images)

The Washington Post is no friend of President Donald Trump and his ilk.

The paper published an article, "Trump's Lost Summer," at the beginning of this month. Today, Trump's latest press secretary Stephanie Grisham attempted to rebut the piece in an op-ed called "The Washington Post's Lost Summer."

The President's middle son, Eric Trump also tried to pile on the Washington Post, shaming its "tactics" using a screenshot of an email sent by Post reporter David Fahrenthold. The attempt backfired completely.

Because the tactics Eric was condemning were standard journalism.

Fahrenthold writes in the email:

"I'm very sorry to bother. I'm a reporter for the Washington Post, and I cover the Trump Organization as a business. As part of that, I try to make sure every Trump Org employee has my contact information. You know the company so much better than I ever could. I'd like your help to make sure I don't miss something important."

The email is a standard journalistic letter for reaching out to a source: he explains why he's reaching out and provides his contact information, he assures that the source's information could be kept confidential, and he lets the potential source know where to send confidential documents anonymously.

He simply says to reach out if there's important information, then explains how to reach out.

A number of journalists came to Fahrenthold's defense, and roasted Eric for his lack of awareness.

quite nice of Eric Trump to show young journalists everywhere a model template for reaching out to sources https://t.co/VguBQ4Spkq
— Steadman™ (@Steadman™) 1567800998.0

This is an extraordinarily standard, to the point of almost boringly boilerplate, way to reach out to a potential s… https://t.co/nIQmyqk61a
— Kyle Cheney (@Kyle Cheney) 1567800390.0

Other journalists and non-journalists alike continued to roast Trump for this ultimate self-own.

@EricTrump @washingtonpost @JeffBezos Wait. A reporter is trying to get information? It’s hard to be the dumbest T… https://t.co/XScvnOzy7r
— Crutnacker (@Crutnacker) 1567801952.0

Fahrenthold has yet to respond.