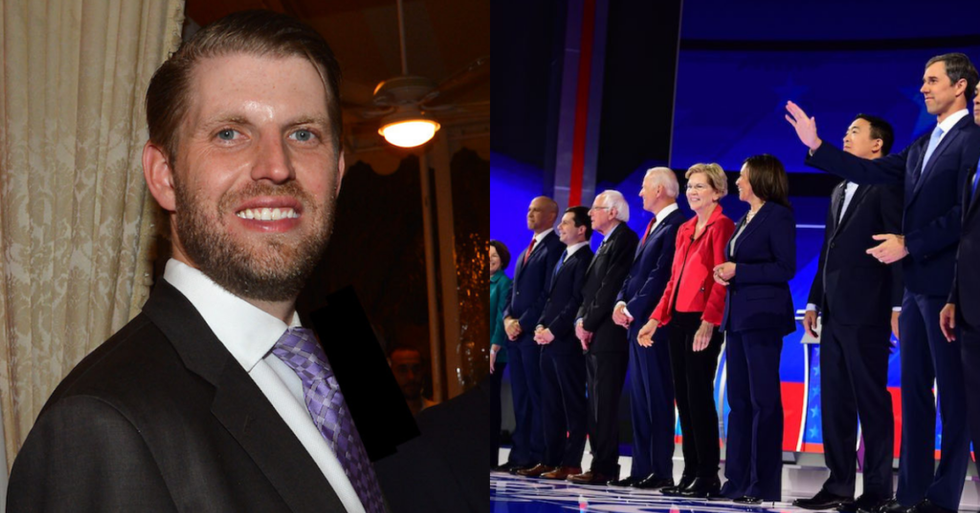 Not having learned his lesson after weighing in on one of the Democrats' June presidential debates, President Donald Trump's third child with ex-wife Ivana—Eric Trump—decided to make another insightful Twitter post assessing the merits and deficiencies of the 2020 Democratic presidential field.

You may remember this piece of eloquence from June:

And the Internet wasted no time in pouncing.

While his elder brother's recent social media post selling Trump camo merchandise including a stained t-shirt earned Don Jr. the designation of king of the self-own, Jr. may need to pass over the crown to his younger bro.

@HoarseWisperer @EricTrump Hes only 35? Damn I thought he was at least 45. The trumps dont age well physically or mentally.
— Felonious Monk (@Felonious Monk) 1568386855.0

@EricTrump Only someone who‘s had everything he’s gained in his life solely because of nepotism would find educated… https://t.co/TIZQnQcNVo
— Michelle Bhasin (@Michelle Bhasin) 1568336617.0

Maybe it would be best for Eric to leave the debate commentary to others from now on.

The book It's Even Worse Than You Think: What the Trump Administration Is Doing to America is available here.