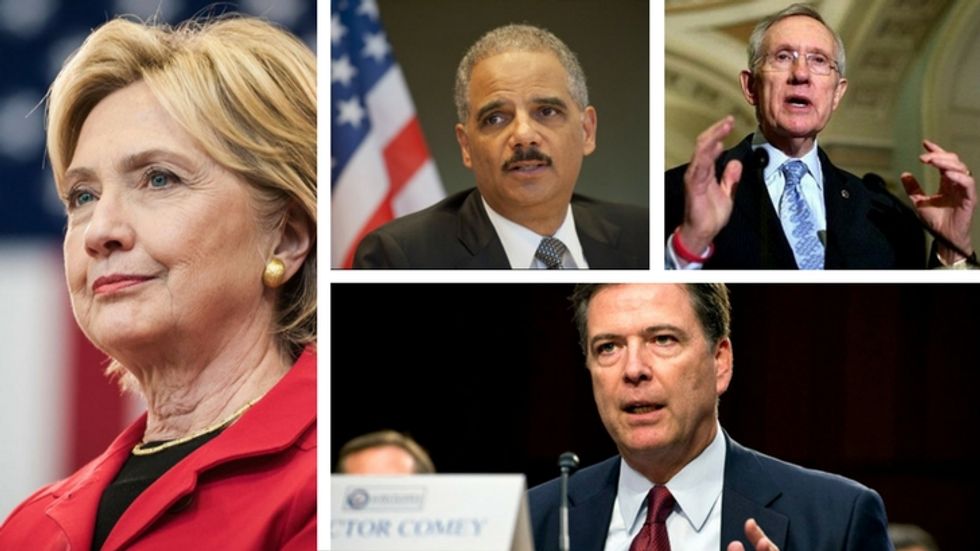 In a scathing op-ed for The Washington Post published last night, former Attorney General Eric Holder criticized FBI Director James Comey for his handling of the investigation into Hillary Clinton's use of a private email server while Secretary of State. In his letter, Holder argues that Comey broke protocol when he wrote a letter to Congress about reviewing the newly located emails, which were found on former Congressman Anthony Weiner's laptop. (Weiner is the estranged husband of Clinton aide Huma Abedin.) According to individuals familiar with the case, FBI officials stumbled across the emails weeks ago but did not brief Comey on the development until last Thursday. Comey's announcement came 11 days before the general election; in July, he recommended that the Justice Department bring no charges against Clinton.

The FBI, wrote Holder, "has a practice of not commenting on ongoing investigations. Indeed, except in exceptional circumstances, the department will not even acknowledge the existence of an investigation. The department also has a policy of not taking unnecessary action close in time to Election Day that might influence an election’s outcome. These rules have been followed during Republican and Democratic administrations."

The rules, he notes, "aren’t designed to help any particular individual or to serve any political interest." Instead, they "are intended to ensure that every investigation proceeds fairly and judiciously; to maintain the public trust in the department’s ability to do its job free of political influence; and to prevent investigations from unfairly or unintentionally casting public suspicion on public officials who have done nothing wrong."

Holder also questions the timing of Comey's announcement: "I fear he has unintentionally and negatively affected public trust in both the Justice Department and the FBI. And he has allowed — again without improper motive — misinformation to be spread by partisans with less pure intentions," he wrote. "Already, we have learned that the importance of the discovery itself may have been overblown. According to the director himself, there is no indication yet that the “newly discovered” emails bear any significance at all. And yet, because of his decision to comment on this development before sufficient facts were known, the public has faced a torrent of conspiracy theories and misrepresentations."

Comey's decision to hold a news conference the day he recommended the Justice Department bring no charges against Clinton did not escape Holder's critical eye: "Instead of making a private recommendation to the attorney general––consistent with Justice Department policy––he chose to publicly share his professional recommendation, as well as his personal opinions, about the case. That was a stunning breach of protocol. It may set a dangerous precedent for future investigations. It was wrong," Holder wrote. "The director said in July that he chose to take that extraordinary step in response to intense public interest... The additional public scrutiny such investigations provoke makes it even more important that we handle those cases consistently and responsibly. That is exactly why guidelines are put in place: so that Justice Department leaders, including FBI directors, will not substitute their own judgments and opinions for reasoned, fair, coherent and time-tested policy."

"I served with Jim Comey and I know him well. This is a very difficult piece for me to write. He is a man of integrity and honor. I respect him. But good men make mistakes," Holder concluded. "In this instance, he has committed a serious error with potentially severe implications. It is incumbent upon him — or the leadership of the department — to dispel the uncertainty he has created before Election Day. It is up to the director to correct his mistake — not for the sake of a political candidate or campaign but in order to protect our system of justice and best serve the American people."

Holder is not the only prominent political figure to take Comey to task for his announcement to Congress. In a letter, Senate Minority Leader Harry Reid (D-Nevada) accused Comey of violating the Hatch Act, a 1939 law intended to keep federal workers from directly supporting political candidates, by reopening the Clinton investigation. “Your actions in recent months have demonstrated a disturbing double standard for the treatment of sensitive information,

with what appears to be a clear intent to aid one political party over another...” Reid wrote. “[Y]our highly selective approach to publicizing information, along with your timing, was intended for the success or failure of a partisan candidate or political group."

As an example of Comey's "selective approach," Reid alleges that the FBI director is deliberately "holding back" evidence of Donald Trump and his campaign's possible ties to the Russian government.

“In my communications with you and other top officials in the national security community, it  has become clear that you possess explosive information about close ties and coordination between Donald Trump, his top advisors, and the Russian government––a foreign interest openly hostile to the United States, which Trump praises at every opportunity,” Reid said. “I wrote to you months ago calling for this information to be released to the public...and yet, you continue to resist calls to inform the public of this critical information.”

Comey, Reid posited, "rushed" to inform Congress "eleven days before a presidential election, despite the fact that for all you know, the information you possess could be entirely duplicative of the information you already examined which exonerated Secretary Clinton." (A source close to the debate over whether Comey should have written his letter to Congress said that Comey's options were limited. Comey previously pledged to alert Congres of any of any further developments in the case, even after the investigation was completed.)

Comey also has found himself on the receiving end of criticism from his own department. Former federal prosecutors and high-ranking DOJ officials penned an open letter in which they said they were "moved" to speak out publicly because Comey's decision violates instruction "to refrain from commenting publicly on the existence, let alone the substance, of pending investigative matters, except in exceptional circumstances" without explicit approval from the Justice Department. "Many of us have worked with Director Comey; all of us respect him," the officials wrote. "But his unprecedented decision to publicly comment on evidence in what may be an ongoing inquiry just 11 days before a presidential election leaves us both astonished and perplexed."

"Perhaps most troubling to us is the precedent set by this departure from the Department’s widely-respected, non-partisan traditions..." they continued. "The admonitions that warn officials against making public statements during election periods have helped to maintain the independence and integrity of both the Department’s important work and public confidence in the hardworking men and women who conduct themselves in a nonpartisan manner."

While the officials wrote they "do not question" Comey's motives, they say the vagueness of his announcement served to confuse the public. "For this reason," they concluded, "we believe the American people deserve all the facts, and fairness dictates releasing information that provides a full and complete picture regarding the material at issue."