The Drop in Oil Prices Creates a Win for the Environment, a Loss for Canadian Oil Companies 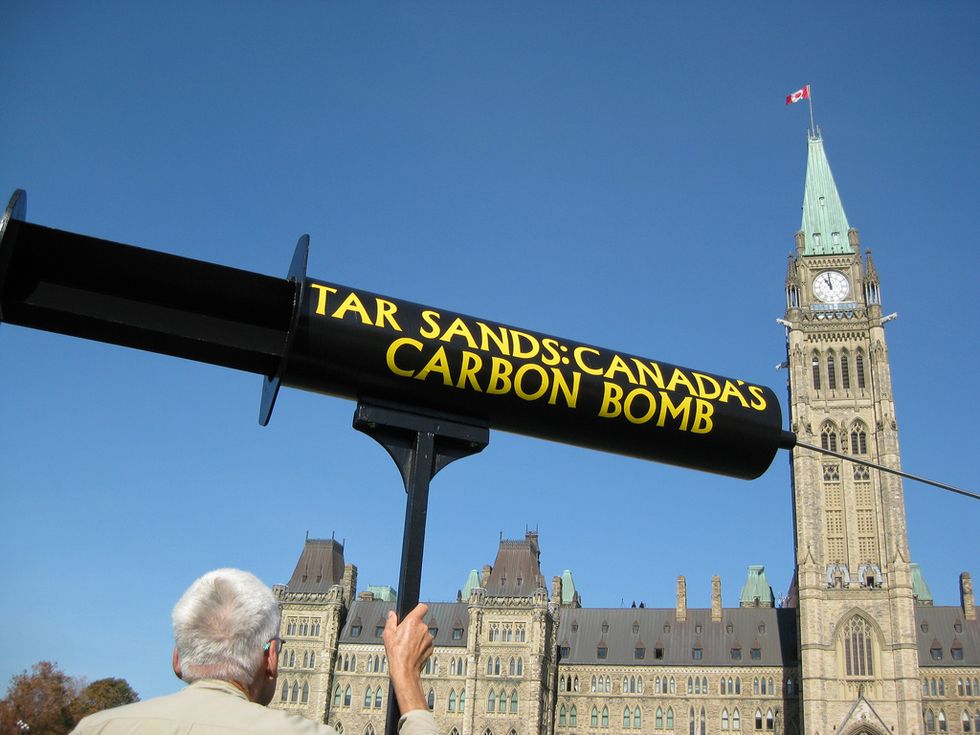 But not everyone is celebrating.

Canada, home to the third largest source of untapped crude oil, and the United States’ biggest single source of crude imports, is digging itself into a deeper and deeper hole as prices continue to plummet.

The problem for Canada is that most of its untapped crude oil is locked up deep beneath the surface in tar sands, a combination of bitumen (a heavy, viscous oil which is then refined into oil), clay, sand and water. While about 45 percent of production comes from traditional strip mining, the remainder has to be extracted through innovative (and expensive) methods.

Even when oil can be extracted by traditional methods, Canada still has one of the highest extraction costs in the world because the oil must be separated from deposits of sand. The difficulty in separating the oil also requires more energy than traditional extraction, causing the production of three to four times more carbon emissions per barrel than conventional oil and gas.

Prices are also high because of high transportation costs from the remote forests of Alberta, where the tar sands are located. The Keystone XL pipeline would alleviate some of these costs. However close to seven years after the initial application, President Obama still has not approved the application for the pipeline project, largely due to environmental concerns. Canada’s Prime Minister Stephen Harper stated that he is not hopeful that it will be approved, at least by the current administration.

The Impact on Canada

The steady decline in oil prices means operators can no longer cover the cost of extracting the bitumen. In order to break even, estimates are that oil must be traded at around $44 a barrel. To generate long-term positive cash flows, oil must trade at closer to $50 a barrel. This has caused developers to stop new projects and halt expansion. It has also led to some smaller players seeking protection from creditors.

But it has not stopped most Canadian oil companies from continuing to produce – even at a loss. Taking the view that the market will rebalance over time, the companies see them-

selves as having no choice but to produce, wanting to avoid breaking contracts. As reported in The Toronto Star, Calgary analyst Peter Argiris explained, “The problem is these companies just can’t stop producing. They still need to produce, they need to pay their bills, and they need to ensure their bond covenants are not breached.”

The heavy hit to Canadian oil companies has also impacted Canada’s economy overall. Prime Minister Harper bet heavily on production from the tar sands, championing ever-increasing extraction throughout his six terms in office. The increased reliance on profits from the tar sands has translated into a bigger hit on the Canadian economy as oil prices plummet. The Bank of Canada has twice made surprise interest rate cuts since January to try to alleviate the economic impact; the spring budget was delayed; and the Canadian dollar has plunged more than 20 percent in two years.

While Canadian oil producers are reeling, environmentalists are celebrating. Greenpeace cited the expansion of drilling in the Canadian tar sands as one of world’s biggest “carbon bombs.” It estimated that 420 million tons of carbon dioxide would be released by the expansion of tar sands oil extraction by 2020. Greenpeace further speculated that the combined impact of extracting oil from the tar sands, along with the other “carbon bombs” listed in its report, would propel the earth’s temperature above the warming limit of 2 degrees Celsius above pre-industrial levels, or roughly 61.6 degrees Fahrenheit. Scientists widely regard this limit as the threshold above which the impact on the environment would be catastrophic.

Climate scientist Professor James Hansen agreed that extracting oil from the tar sands would be disastrous for the environment, stating that it “doesn’t make sense for [most] of the people on the planet. We are getting close to the dangerous level of carbon in the atmosphere and if we add on to that unconventional fossil fuels, which have a tremendous amount of carbon, then the climate problem becomes unsolvable.”  He continued that if tar sands were fully exploited, it would be “game over” for the climate.

As aptly summarized by Danielle Droitsch, senior policy analyst at the Natural National Resources Defense Council, “It’s bad for oil companies and the profit they were expecting from these projects, but from a climate perspective, it’s tremendous. . . . Any of that oil that’s not developed will help the climate.”