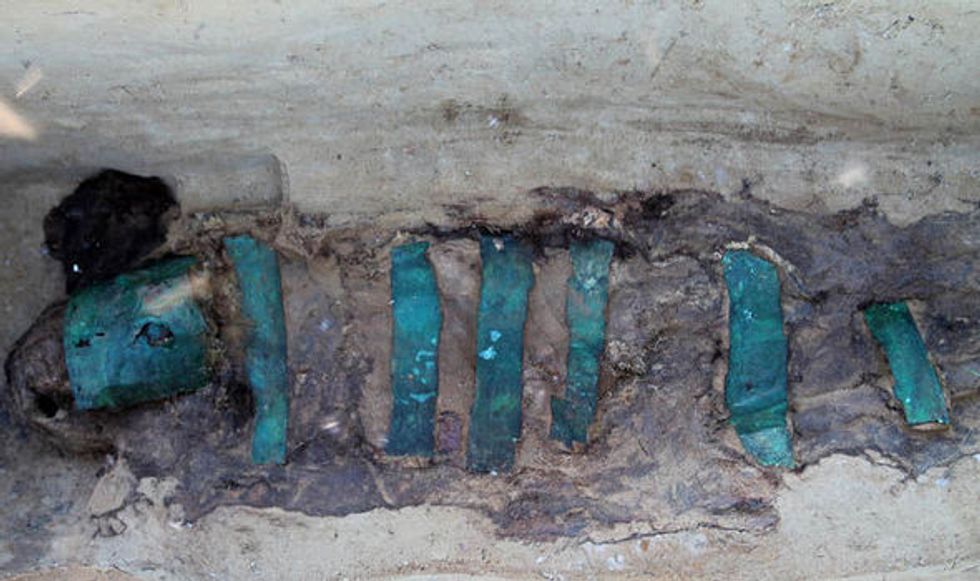 An ancient mummy wrapped in a cocoon of copper, bark and fur was recently found in the Siberian Arctic. Alongside the mummy were the remains of a baby, in similar wrappings. These latest discoveries at the Zeleniy Yar burial site–where dozens of graves have been found over the past 20 years--may shed light on the early human exploration of northern Russia.

The mummies were discovered near a centuries-old monument in a remote corner of Siberia outside of Salekhard. The average yearly temperature in this town, which crosses the Polar circle, is a freezing 21.7 degrees Celsius, which helps to preserve the corpses.

In addition to cold temperatures, copper—a preservative—may have helped to mummify the bodies. “The adult’s cocoon was covered from head to toe with copper plates,” said Alexander Gusev, a senior researcher from Russia’s Center for Arctic Studies. The baby, whom researchers believe to have been no older than six months old upon burial, was wrapped in small fragments of a copper cauldron.

The mummies appear to have been buried according to a ritual. “The mummified remains were found lying next to each other, buried strictly along a north to south line,” said Gusev. In addition, their feet were turned toward a nearby river—the Gorny Poluy. This orientation of the bodies was consistent with that of the other corpses found on the site.

Experts from Russia and South Korea are now opening the adult burial cocoon at a laboratory in Tyumen, Russia. “Once we realized that the adult’s cocoon was really well-preserved, we didn’t risk opening it at the site,” said anthropologist Yevgenia Svyatova from the Center for the Protection and Use of Monuments of History and Culture. “We extracted it with soil to protect it as much as possible.”

The researchers will then attempt to determine the age and sex of the corpses, the type of fur used, and the approximate date of death. Researchers believe they may be up to 1,300 years old.

It is believed that the adult human was exceptionally tall for this era—between 165 and 170 centimeters, or about 5 feet, 7 inches.

These two mummies are not the first to be discovered at this burial site. Since 1997, when the site was unearthed, several dozen graves have been found—47 between 2013 and 2017 alone, their feet also positioned toward the river. Except for one female child, and the recent discovery of a near-perfectly preserved woman, all bodies discovered have been male. In many instances, the skulls were smashed.

In addition to bodies, researchers uncovered artifacts, including bronze bowls from the 10th century that originated in Persia—about 3,700 miles away. But the connection between this civilization and Persia is unknown.