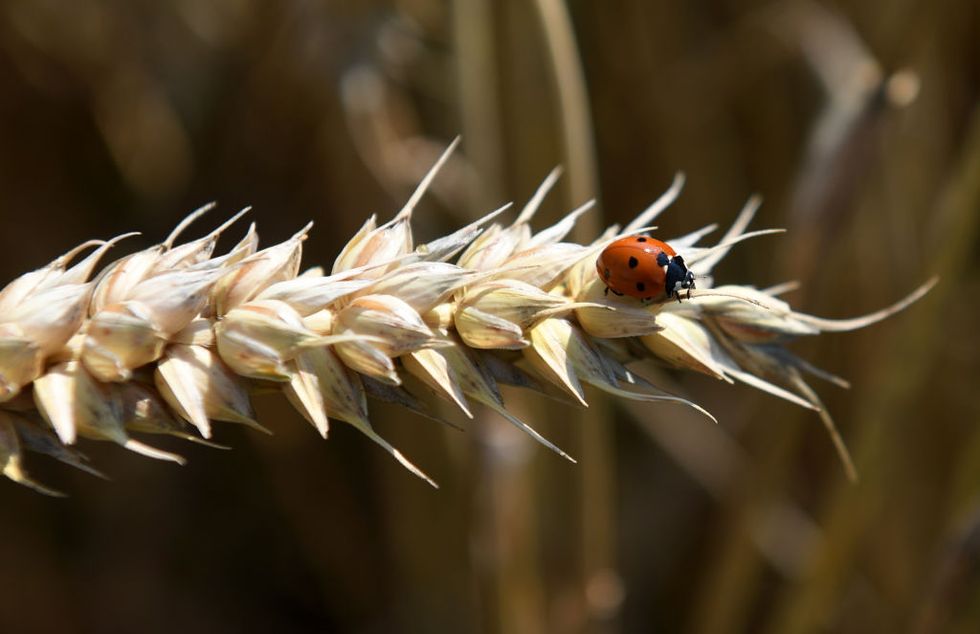 A picture taken on July 24, 2018 shows a ladybug on an ear of wheat in a field near the small village of Puchheim, southern Germany. (Photo by Christof STACHE / AFP) (Photo credit should read CHRISTOF STACHE/AFP/Getty Images)

If you’ve got an aphid problem in your garden and depend on ladybugs for eradication, you might do well to turn down your radio. At least, that’s what’s indicated by a July study published in the journal Ecology and Evolution, overturning once and for all AC/DC’s 1980 claim that “rock ‘n’ roll ain’t noise pollution.”

In a unique experiment, researchers at Mississippi State University placed ladybugs and aphid-infested soybean plants in chambers outfitted with computer speakers and an iPhone, which then played everything from rock and country music to folk-punk and just plain industrial sounds like car horns and jackhammers.

While most of the music had no quantifiable effect on the insects, both the rock music and industrial sounds caused them to eat fewer aphids than a control group of insects allowed to eat in silence, even though aphids are one of the black-spotted red beetles’ preferred food sources. To finalize the experiment, the researchers then subjected a group of ladybugs to two weeks’ worth of AC/DC’s 1980 album “Back in Black.”

Why that particular choice?

“The reality is, it started with me listening to AC/DC in my car,” Barton told Earther. “I love AC/DC, and I’ve listened to that album a million times, but I thought about that last song on the album—‘Rock and Roll Ain’t Noise Pollution’—and for some reason it just clicked: that’s a testable hypothesis.”

Sure enough, after two weeks of lead singer’s Brian Johnson’s distinctive vocals, the music-exposed bugs’ plants contained 40 times more aphids than did those in with the control group of ladybugs, who were allowed to eat in silence.

The exact reason why was not determined: “While we found convincing evidence that anthropogenic [or, human-caused] sound can affect lady beetle foraging rates and indirectly affect aphids and plants,” the researchers write, “we also show that this does not occur with all anthropogenic sounds. Our results suggest that volume (i.e., magnitude) is important…. It remains unclear why some treatments (e.g., country music and the band Warblefly) failed to have an effect on predation rates when at the same volume as Back in Black.”

The researchers then dried and weighed the remaining soybean plants, finding that the ones placed with the ladybugs who experienced the noise had suffered “reduced final plant biomass,” raising implications for noise pollution in the commercial agriculture world.

"I don't think that noise pollution itself is going to become a huge threat for farmers and agriculture," lead researcher Barton told the Australian Broadcast Corporation. "But when you add noise pollution in combination with warming temperatures, changing precipitation patterns, [and] slowing winds, all of these things together are probably going to have an impact on the efficiency of natural enemies, pest loads, how much pesticide must be applied and of course crop yield."

Though it might be difficult for farms to reduce the amount of noise from equipment and operations, they at least have an idea of what music not to play while out in the field.