Parasites Could Be Lurking in Your Sushi 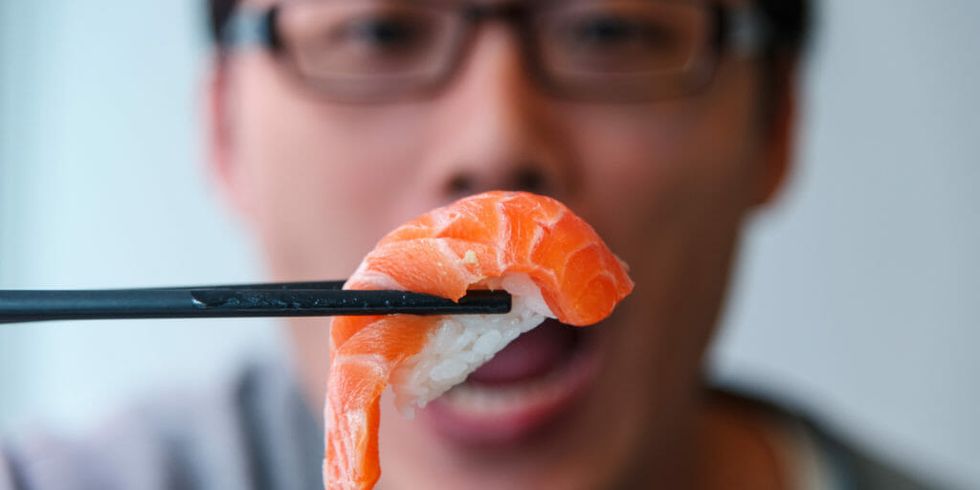 If you’re trying to eat more healthily, going out for sushi can be a great option. That is, unless you happen to ingest an anisakis along with your tuna roll, a parasitic worm that can attach itself to your GI tract. And unfortunately, according to a report released earlier this month in British Medical Journal Case Reports, illnesses from this type of parasite are on the rise.

Anisakis is a white, string-like nematode, a type of roundworm found in salmon, herring, cod, mackerel, squids, halibut and red snapper. The larvae are about 5 millimeters wide and up to 3 centimeters long. When eaten along with that delicious bite of spicy salmon roll, the larvae can live in the human body for weeks.

A person who has ingested the anisakis won’t always become ill. But if the worms invade the stomach wall or intestines, the person will experience stomach pain, nausea, and vomiting. Complications, including digestive bleeding, bowel obstruction, and stomach inflammation, can develop. Some people may even develop an allergic reaction, which can cause difficulty breathing and loss of consciousness. In some instances, the larvae have to be surgically removed.

Anisakis is most prevalent in countries where fish is eaten raw. Their numbers in Japan have spiked in recent years, causing the Health, Labor and Welfare Ministry to issue an official warning. The numbers are likely to climb worldwide as consumption of undercooked fish increases.

Anisakid larvae in the body cavity of a herring. (Credit: Source.)

Dr. Joana Carmo, lead author and physician in the gastroenterology department of the Hospital of Egas Moniz in Lisbon, Portugal, said that “in European countries, fish infestation is probably more frequent than we thought. One study showed that anisakis simplex (the species mostly commonly associated with human infections) was found in 39.4% of the fresh mackerel examined from different fish markets in Granada, Spain.” In another study of Spanish chain supermarkets, nearly 56 percent of blue whiting fish were infested.

In the United States, the Centers for Disease Control and Prevention (CDC) have not tracked instances of anisakiasis. However, according to spokeswoman Amy Rowland, “rare cases have been identified in the US.”

Certain precautions can be taken to prevent infestation. The CDC website notes that: “Some people experience a tingling sensation after or while eating raw or undercooked fish or squid. This is usually the worm moving in the mouth or throat.” If that happens, you may be able to remove the worm or vomit to expel it manually.

The easiest way to avoid parasites, though, is to avoid sushi altogether for properly cooked fish. However, for some, that’s just not going to happen. There’s still good, if gross, news: “Properly trained sushi chefs can detect anisakis larvae,” said Carmo. “They are grossly visible in the fish.