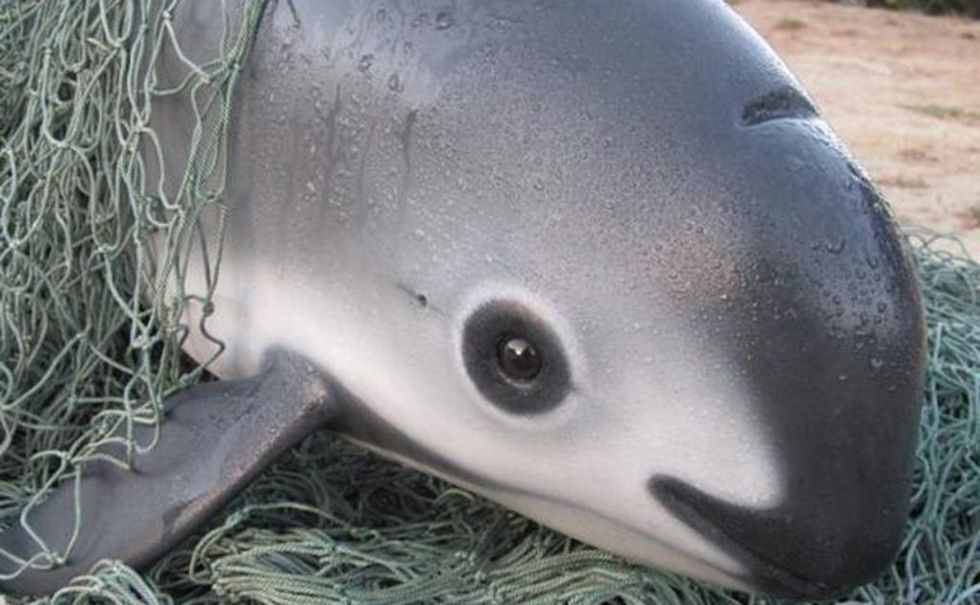 Serious conservation efforts are vital to the survival of 30 or so vaquita porpoises. Sometimes called the “smiley-faced pandas of the sea” due to the dark outlines around their mouth and the black circles around their eyes, these are all that remain in the wild. Scientists predict the species could be extinct by 2018. Native to the upper Gulf of California, their global population has plummeted by 90 percent in the last six years. Ten years ago, when the baiji, or Chinese river dolphin (Lipotes vexillifer), became extinct due to over hunting and pollution, researchers estimated the vaquita population at 500 individuals, making them the most endangered cetacean (whales, dolphins and porpoises) in the world.

Vaquita porpoises (Phocoena sinus), or "little cow" in Spanish, are also the smallest cetacean. Females grow to 55 inches or three-quarters of the length of a twin bed. Male vaquita are slightly smaller at 53 inches. "Losing it would be like losing a piece of Mexico," said Maria Jose Villanueva, director of strategy and science for WWF Mexico.

Scientists link the survival of the vaquita to a large fish called the totoaba. Gillnets are a big part of the problem. In the Gulf of California, gillnets—long sheets of netting hung vertically in the water to catch fish by the gills as they swim through—are illegally set up in the home range of the vaquita. The gillnets are set out to catch totoaba—itself an endangered fish. The nets can be over a mile long. Local conservationists remove the nets wherever they see them but that has not been enough to save the vaquita and other marine mammals. Every year 700,000 marine mammals and birds are "accidentally" killed in these vast and indiscriminate gillnets.

Totoaba swim bladders are in demand for their medicinal qualities. The vaquita also caught in the gillnets  are a causality of this demand. The totoaba uses its swim bladder to regulate buoyancy. For centuries, wealthy Chinese have used the swim bladders, what they call

“fish maws,” to make a soup believed to alleviate the discomforts of pregnancy and cure joint pain. In 2011, a single totoaba bladder could fetch as much as $137,000 USD. Though prices have been dropping, the swim bladders have been dubbed "aquatic cocaine" due to their high price and Chinese vendors can still get around $15,000 USD per kilogram.

In 2015, during a routine luggage scan, airport officials in the Mexican border city of Tijuana arrested three Chinese nationals who had stashed 247 totoaba bladders, swaddled in plastic and paper towels, in their suitcases.  That same year, the Mexican government set a two-year ban on gillnets in the Gulf of California and had to compensate fishermen $74 millionUSD. The ban has now expired.

Since the ban's expiration, local environmental and conservation groups are hoping to launch an emergency plan in September to move the remaining vaquitas to a 'temporary sanctuary.' "We see it as a desperate measure," said Jorge Rickards, interim director general of WWF Mexico. "We consider this a high-risk measure because nothing like this has ever been done before."

Giving consideration to the needs of commercial fisheries, conservation, aquaculture, sports fishing and tourism, researchers report on 2013 on conservation strategies. Fishing restrictions to help the vaquita may have a negative impact on other marine species. The researchers used a predictive computer model to learn about the impact of restricting the use of gillnets and shrimp drift net in the vaquita's habitat. The restrictions had a positive impact on the vaquita, sea lions, sea turtles, and totoaba populations. The limitations caused a decline in commercial fishery catches for fish, includingmackerel, drum, and croaker, while it increased the catch of other species such as skates, rays, and sharks.