Melting Ice Is Not Only Causing Sea Levels to Rise, It's Causing the Ocean Floor to Sink 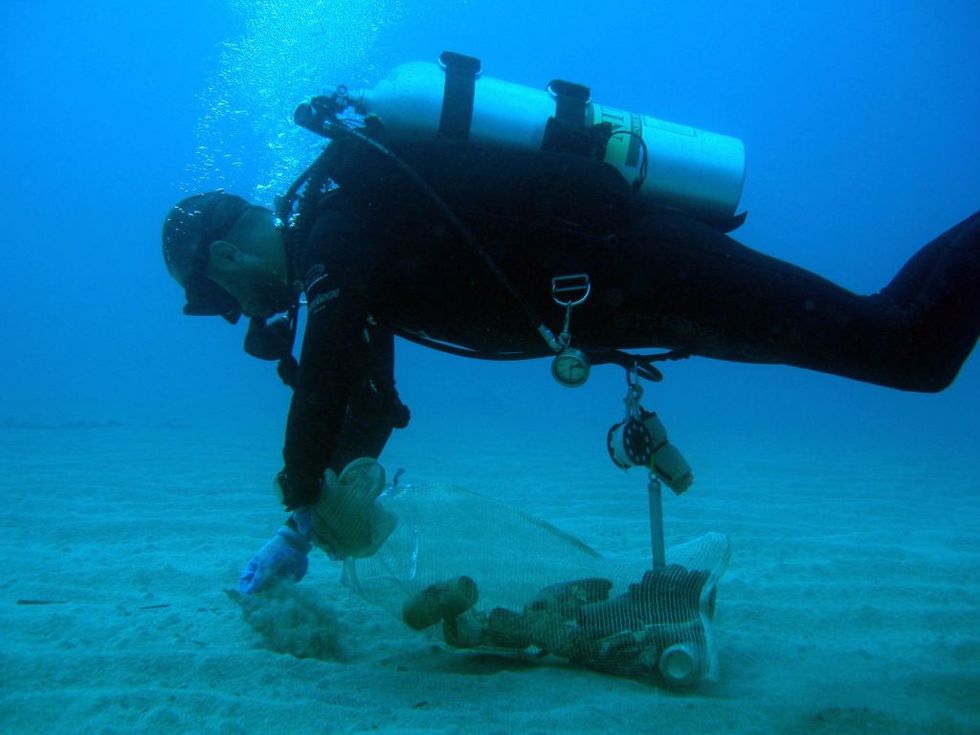 Lebanese divers take part in cleaning the seabed off the coastal city of Batroun, north of Beirut, on October 14, 2017. The Lebanese divers plunge below the surface, scuba tanks on their backs and nets in hand. But what they're looking for under the ocean surface is not treasure, it's trash. The group is conducting a clean-up below the waves, one of many initiatives emerging from Lebanon's civil society and private sector in response to the government's failure to address a long-running garbage crisis. / AFP PHOTO / IBRAHIM CHALHOUB (Photo credit should read IBRAHIM CHALHOUB/AFP/Getty Images)

Anyone who has carried a couple of gallons of water any distance knows just how heavy the planet’s most abundant liquid actually is. So perhaps it won’t be surprising to learn that the melting of the Arctic and Antarctica has had a profound and dramatic effect on the ocean floor.

It’s almost inconceivable, but with all the added weight, theocean floor is sinking. And no, that isn’t good news for the planet. Once again, climate deniers have pulled and twisted the science to suit their own agenda, and they couldn’t be more wrong.

The Earth’s crust — or outer geological layer — actually behaves like a huge elastic, so it’s able to stretch and bend subtly as enormous planetary pressure is asserted.

But there’s nothing subtle about what climate change is doing to the world’s coldest places in a process known as polar amplification. The planet is warming significantly, but the largest and most frightening changes in temperature are occurring twice as fast at the poles.

The result?Greenland is shedding 270 billion tons of ice per year, and that rate is increasing significantly every decade. Last year inAntarctica, a chunk of sea ice the size of Delaware split from the Larsen C ice shelf, making it likely that mammoth landlocked icebergs will flow into the oceans and wreak havoc on coastal communities as they melt, forcing sea levels to rise by feet, not inches.

The weight of all this water and ice is stretching theEarth’s elastic crust, and pushing seabeds downward measurably. According to a study published this year in the journalGeophysical Research Letters, the sea floor has been sunk by about0.2 mm, or 0.08 inches, over the last two decades.

Climate deniers have seized on the news as proof again that scientists are alarmists who constantly have to walk back their predictions of biblical calamity. They argue that if the ocean sinks, then Miami, New Orleans, Shanghai and Rotterdam aren’t in any danger from melting icebergs.

That’s exactly the wrong message. If the ocean is sinking, it means that the rate of sea level rise over the last two decades has been underestimated. Once again, scientists have offered conservative predictions and, as our knowledge and depth of understanding increases, we’re in much worse shape than expected. In fact, while the seabed has sunk by 0.2 mm in two decades, sea levels have risen by 85 mm.

So we’re still on track to witness sea levels rise by between 11 and 40 inches this century — by which time even North America will be teeming with climate refugees and spending trillions of dollars annually to mitigate the worst effects of climate change.

And that’s the thing. Climate change is reshaping the planet. Even if we could put the genie back in the bottle, and limit carbon pollution immediately, the planet will warm for centuries because it’s already locked in.

It’s been three million years since CO2 was at current levels — roughly 408 parts per million. Sea levels back then were about 80 feet higher than they are now.

Biblical levels of flooding might arrive this century, or it might be next. We just don’t know becausecarbon pollution isn’t showing any signs of abating.