We Can Now Bring Back the Northern White Rhinoceros From Extinction...Sort Of 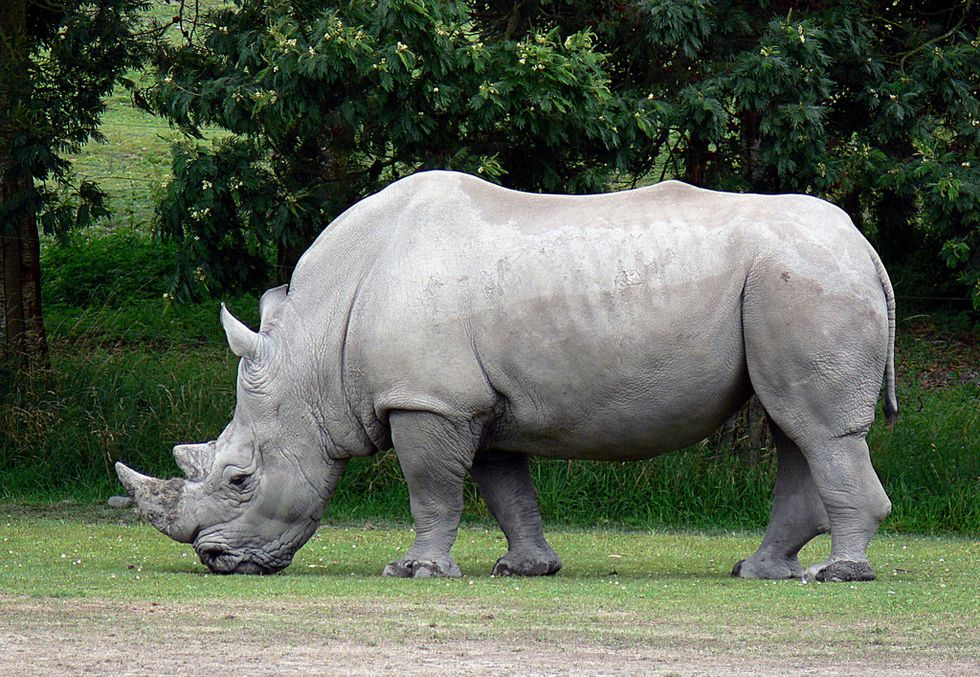 In Jurassic Park, scientists resurrect long-extinct dinosaurs after discovering dinosaur blood inside a prehistoric mosquito trapped in amber. Although most real-life scientists question the plausibility of this method for bringing back long-dead species, this has not stopped researchers from exploring how to bring an organism back from extinction. Dr. Jack Horner wrote an entire book called How to Build a Dinosaur, where he describes an approach that he believes would allow him to produce a partially reconstituted dinosaur.

In recent reports, a group of scientists is attempting to bring back a more recent partially extinct species: the African white rhinoceros.

The science is not far-fetched. In fact, within the past decade, scientists have invested a great deal of time and money in an effort to resurrect the woolly mammoth. The subject matter is exquisitely discussed in How to Clone a Mammoth by Dr. Beth Shapiro, who coalesces the idea of bringing a species back from the dead under the banner of “de-extinction.”

Indeed, about seven years ago, there were many reports about a team of Japanese scientists who confidently asserted that they were on the brink of producing a living woolly mammoth. The Japanese team of researchers had in their possession an intact carcass of a woolly mammoth called “Buttercup” that had been discovered frozen in Siberia. They intended to recover genetic material from the corpse and then implant that material into an egg cell from an adult African elephant that would bring the embryo to term. Such efforts have a long history going back to 1997, but continually hit the stumbling block of not finding viable genetic material that is sufficient to reconstitute a live woolly mammoth.

Bringing back an animal species that only went extinct in the past few years seems like a more attainable goal than the woolly mammoth and dinosaurs. Yet, the science behind the white rhino project is quite complex and not without its doubters and detractors.

First, the northern white rhino is not fully extinct… yet. The last male of the species, named Sudan, died earlier this year in March. Before his passing, sperm samples were collected from Sudan as well as two other male rhinos before their deaths in the hopes of possibly preserving the species. There are two females remaining, both of which are unfortunately infertile. According to Dr. Thomas B. Hildebrandt, who spearheaded this study, in order to produce embryos, eggs were taken from a related sub-species called the southern white rhinoceros and the male northern rhino sperm was injected into them through a process known as “intracytoplasmic sperm injection” (or ICSI). The laboratory has succeeded to this point in the process. Subsequently, surrogate mothers would then be implanted with these specially constructed embryos that will hopefully come to term without any developmental issues. It is important to note that any resulting baby rhinos would be hybrids of the northern (sperm donor) and southern (egg donor) rhinos, but this would be a critical first step in the northern rhino resurrection.

The next step in restoring the northern white rhinos will involve collecting egg cells from the remaining two females. However, this presents a challenge as the harvesting of eggs is a delicate and complicated procedure given the size of an average rhinoceros. There is another stumbling block in that there was a limited amount of semen that was able to be collected from the last three males and the quality of sperm was not the best. The researchers believe that they will be able to concentrate the genetic material of the northern white rhino after gestating the hybrids.

The scientists also plan to recover embryonic stem cells from the embryos produced thus far, which can differentiate into any type of cell in the body given the correct chemical and genetic cues. Here, they would attempt to turn the pluripotent stem cells into eggs and sperm that could then be utilized to generate more northern white rhino embryos.

Alternatively, the scientific team has considered pursuing “induced pluripotent stem cell” (or iPS cell) technology, where normal differentiated cells in different tissues can be retro-converted back into cells similar to pluripotent embryonic stem cells. Given the abundance of tissue samples that were harvested from the deceased rhinos, the team believes that they could use this approach to produce stem cells that could then be transformed into egg and sperm cells should the first method fail.

Some conservationists are unconvinced that these laboratory techniques will eventually lead to the generation of healthy herds of northern white rhinos. Their doubt is based on years of failure in applying assisted human reproductive methods to wild species of animals. These efforts have often been met with high mortality rates in the offspring and high rates of abortive pregnancies. Despite that, others have noted that few other options remain. And if these research endeavors do result in the successful reintroduction of the northern white rhino to the wild, it will open the gates toward the restoration of other populations of animal species that have been lost to due to hunting, poaching, pollution, and global climate change.

One question that should be considered as science moves us closer and closer to the dream of “de-extinction” and “bio-resurrection”: how far should we take this new technology? To quote the character of Dr. Ian Malcolm in Jurassic Park: “your scientists were so busy figuring out if they could that they never stopped to think if they should.” Indeed, despite our brilliant advances in molecular genetic techniques, are we truly smart enough to foresee all the eventualities of unleashing extinct species into a modern ecosystem? In all likelihood, we may soon have actual answers rather than hypothetical ones.