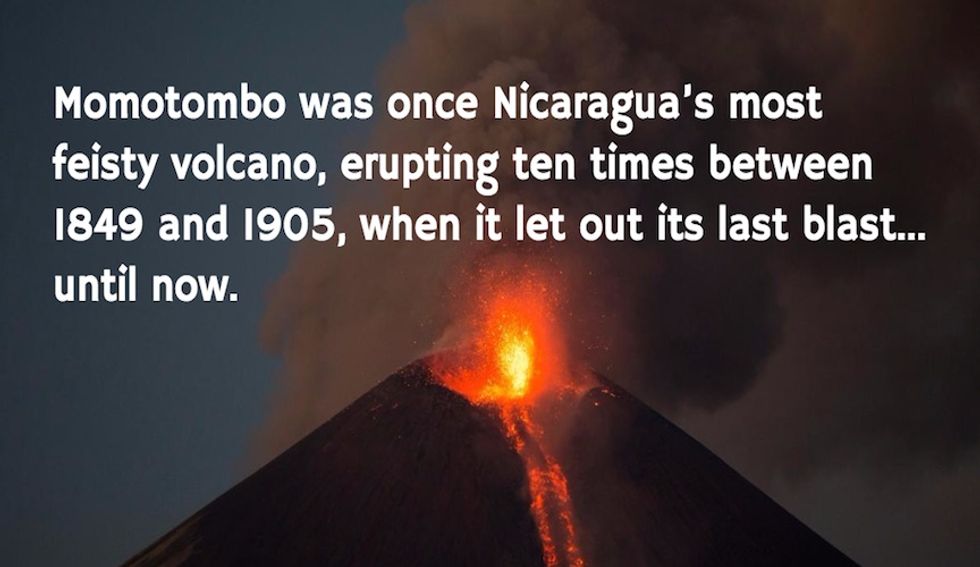 Nicaragua’s iconic Momotombo volcano has leapt back into action, emitting a significant blast after 110 years of inactivity. In what is known as a strombolian eruption, radiant lava burst from the 4,254-foot peak on December 2, along with a majestic plume of dark ash that rose to an altitude of 8,000 feet.

No one was hurt at this popular tourist site, which lies next to Lake Managua. The hot rock and ash that drifted from the volcano traveled northwest toward parts of the region that are only sparsely populated. Nevertheless, local schools were closed as a precaution. Meanwhile, a live INETER webcam shows that Momotombo has since quieted down.

Check out this spectacular aerial video of the eruption that the guitarist from the San Francisco rock group Gold Minor captured through an airplane window:

Also, here is a close-up shot of Momotombo emitting the kind of short blasts of lava that are typical of a strombolian eruption.

How long before Momotombo erupts again is anybody’s guess. Precise answers continue to elude scientists as to why volcanoes may follow erratic patterns of activity, and why the once-active Momotombo, in particular, went offline for more than a century. Nevertheless, there are signs that the volcano may have been building up to

its recent eruption for over a decade. Between 2003 and 2011, a handful of small seismic swarms hinted at magma circulating beneath the volcano. And in 2007, the temperature began rising in the summit crater’s hydrothermal system. The volcano gave apparent indications that it was ready to burst two weeks before the recent blast, as locals began sensing tremors.

Momotombo was once Nicaragua’s most feisty volcano, erupting ten times between 1849 and 1905, when it let out its last blast. A major eruption in 1605 destroyed the country’s then-capital, León Viejo. Survivors of that disaster wound up resettling about 30 miles to the west, founding the city of León that is known to present times.

Just a baby in geologic terms, Momotombo began its growth some 4,500 years ago. It belongs to the stratovolcano class, which includes volcanoes that are conical and formed over time as eruptions leave behind hardened layers of lava, ash and other debris. The most visually arresting of volcanoes, stratovolcanoes are also the most dangerous. Other notable, and destructive, members of this volcanic family include Vesuvius, which buried the Roman village of Pompeii in 79 A.D., and Washington State’s Mount St. Helens, which in 1980 gave the lower 48 states their only major volcanic eruption in what has now been a century.

Other Central and South American volcanoes have made a show of it lately. Guatemala’s Fuego and Santiaguito volcanoes experienced moderate eruptions the same

week as Momotombo’s. (Check out Fuego’s spectacular lava fountain in this Reuters video.) Additionally, another of Nicaragua’s active volcanoes, Telica, has had quite an ashy year, last letting out a small plume in November.

There is no apparent connection between these eruptions and Momotombo’s, however, outside of the fact that they all sit on the area where the Cocos tectonic plate is sliding under the adjacent Caribbean plate, in a process called subduction.

Subduction commonly gives rise to stratovolcanoes, including those that join with Momotombo in comprising the Pacific region’s so-called Ring of Fire. This horseshoe-shape of volcanic and earthquake activity is the world’s most active, and results from subduction between plates that lie beneath the Pacific Ocean and adjacent plates.

The Pacific Ring of Fire’s seismic activity includes the 9.0 earthquake and subsequent tsunami that hit northeast Japan in 2011 and led to the meltdown of the Fukushima power plant. As The New Yorker ominously reported in July, the Cascadia subduction zone, a 700-mile stretch running from Northern California to Vancouver Island, Canada, threatens the Pacific Northwest with what some predict will be a cataclysmic quake and the worst natural disaster in the history of North America.