Everything Is Terrible, So of Course This Green-Haired Turtle That Breathes Through Its Butt Is Endangered 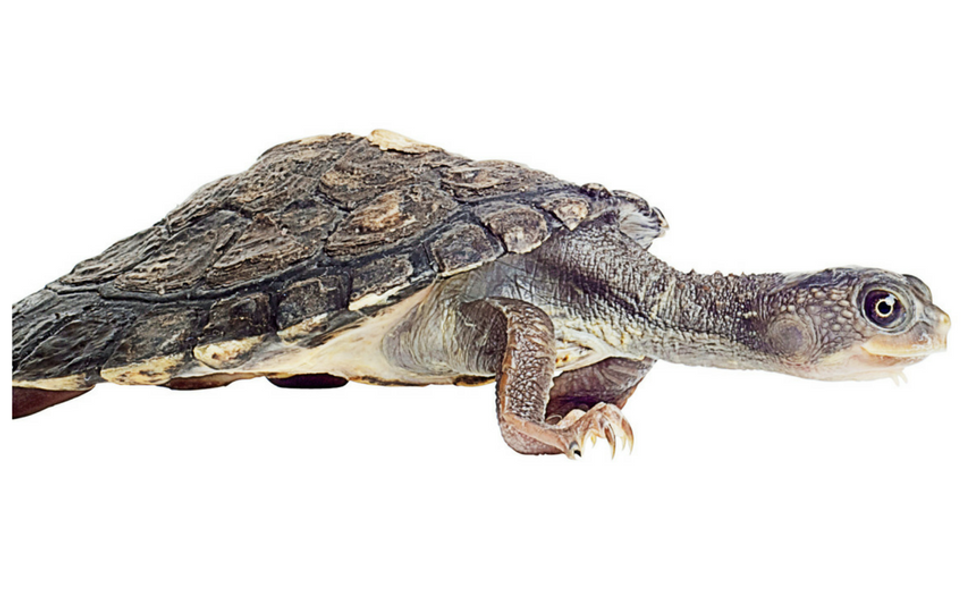 A pink snake that looks just like a worm, a bright-turquoise gecko, and a green-mohawked turtle that breathes through its behind — odds are you’ve never seen them, and according to a new list of “rare and cryptic” critically endangered reptiles, unless action is taken to preserve their habitats, you never will.

The Zoological Society of London in April released a list of the 100 most Evolutionary Distinct and Globally Endangered (Edge) reptiles which, according to the Edge website, “have few close relatives on the tree of life and are often extremely unusual in the way they look, live and behave, as well as their genetic make-up.”

Perhaps most extraordinary in appearance — and beloved in the media this month — is No. 29 on the list: Elusor macrurus, the Mary River turtle. Found only in the Mary River in Queensland, Australia, the reptile features what look like stalactites sprouting from its chin, along with long strands of green algae on its head reminiscent of a mohawk, or perhaps a troll-doll hairdo.

This Mary River turtle has a rather fetching punk hairdo made of green algae. (Image: Chris Van Wyk) https://t.co/o3ksnL2MUJ
— Quite Interesting (@Quite Interesting) 1518566400.0

Although it sports notably large nostrils, scientists have discovered it actually breathes through a gill-like mechanism inside its cloaca. In short, it breathes through its butt, not its nose.

Given its unusual features, the Mary River turtle was a popular pet in Australia during the 1960s and ’70s. And as a result, collectors decimated the natural population.

"The turtle takes a long time to reach sexual maturity, taking up to 25 to 30 years," Rikki Gumbs, Edge coordinator, said in a statement. "As their vulnerability was discovered late, we lost a whole generation due to the pet trade and now their population has become very small." A recovery plan that involved researchers soliciting donations and selling “turtle chocolates” was drafted in 2013, but never approved.

This year is the first time Edge, which usually focuses on birds and mammals, has released a list of endangered reptiles.

“Reptiles often receive the short end of the stick in conservation terms, compared with the likes of birds and mammals,” said Gumbs. “However, the Edge reptiles list highlights just how unique, vulnerable and amazing these creatures really are. Just as with tigers, rhinos and elephants, it is vital we do our utmost to save these unique and too often overlooked animals. Many Edge reptiles are the sole survivors of ancient lineages, whose branches of the tree of life stretch back to the age of the dinosaurs. If we lose these species there will be nothing like them left on Earth.”

Those wanting to help preserve the Mary River turtle and other unusual and endangered species are asked to consider donating to Edge, so that the organization can purchase local awareness-raising materials and/or train local conservation leaders to further study these unusual animals and determine what measures must be taken to secure their survival. The Tiaro Landcare Group nonprofit in Queensland has also begun a crowdfunding site specifically to save the “bum-breathing turtle” by increasing its hatchling population.

“Please help us to remove the Punk Butt Breathing Turtle from the unlucky club,” reads a message on the site. “Our hope is that with your donation we can increase the survival chances of this endangered turtle.”