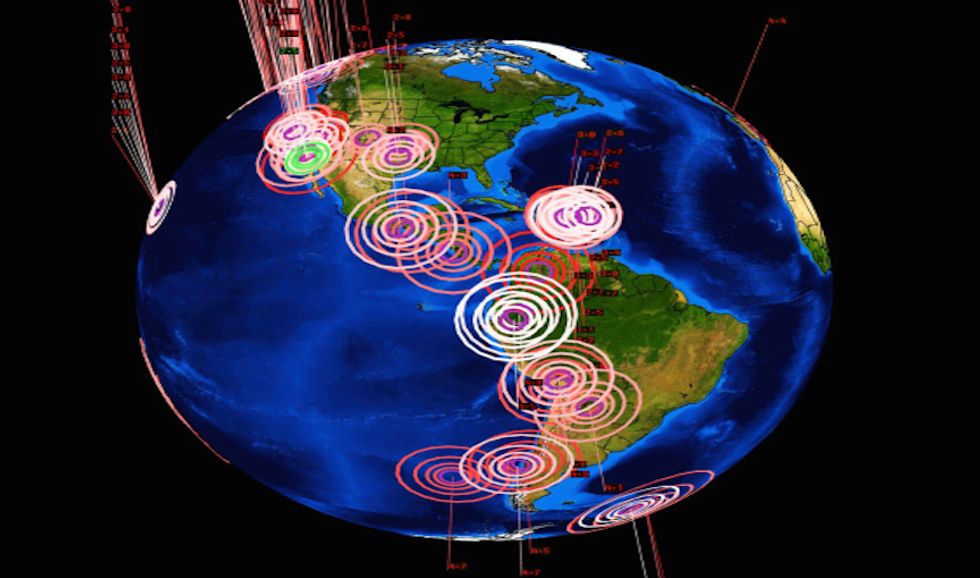 For the first time ever, the U.S. Geological Survey (USGS) has released a seismic hazard forecast that includes human-induced earthquakes. The new report shows that 7 million people in states across the central and southern U.S., a region not historically associated with seismic activity, are at risk of a damaging earthquake. Dangerous earthquakes are now just as likely to hit northwest Oklahoma as they are Monterey, California, which lies along the infamous San Andreas Fault.

“By including human-induced events, our assessment of earthquake hazards has significantly increased in parts of the U.S.,” said Mark Petersen, leader of the USGS National Seismic Hazard Mapping Project. And while critics have cited the hydraulic fracturing (“fracking”) method of gas removal as a main reason for the upswing in quakes, fracking accounts for less than 10 percent of earthquakes happening in the central and southern U.S. The real culprits are wastewater disposal wells used by oil and gas companies.

When companies mine for oil, a toxic saltwater usually comes up with it. The oil companies dig separate wells specifically for the disposal of this wastewater, the liquid injected straight into the earth where it can’t pollute any groundwater supplies or harm the environment. But sometimes the pressure of this injection procedure and the well’s proximity to a fault line are enough to trigger an earthquake, which is considered “human-induced.”

From 1973 to 2008, the central U.S. saw an average of 24 earthquakes a year, most relatively low in strength. The rate increased exponentially between 2009 and 2015, with a new average of 318 quakes per year. In 2011, the largest earthquake on record hit Oklahoma, a 5.6-magnitude tremor that could be felt as far away as Milwaukee. In 2015, there were 1,010 earthquakes in the region, and it seems 2016 is shaping up to continue that pattern.

“The work of scientists has established that disposal wells are creating earthquakes. Now

the question is how do we deal with it,” said Mark Zoback, geophysicist at Stanford University whose research was used by the USGS.

An obvious solution might be restricting the number of wastewater disposal sites oil companies can drill, but the Oklahoma Corporation Commission (OCC) has been slow to pass any definitive regulations, in part because the commission’s legal authority is unclear.

In February, the OCC issued a directive asking well operators to reduce their injection levels by 40 percent over a stretch of territory the size of Connecticut. But the only real way to make that kind of cutbacks is to reduce oil and gas production, which poses a problem for companies stationed in Oklahoma.

The Sooner State isn’t the only hub with an increased risk of earthquakes. The USGS also included southern Kansas, central Arkansas and the Dallas area in its hazard report. Unlike previous reports, which were typically released every six years and provided 50-year outlooks (the lifespan of a building), this report offers only a one-year outlook, due to the high variability of human-induced earthquakes. USGS officials have also said they plan to issue a new map every year with new one-year predictions.

“As a scientist, we have known about induced earthquakes for some time, so these findings seem quite reasonable,” said seismologist John Armbruster of the Lamont-Doherty Earth Observatory at Columbia University. “The fundamental question is, do the people living near these earthquakes know about the risk, and do they accept it?”