Iceberg the Size of Delaware Poised to Break Off

An iceberg the size of Delaware is poised to break off from Antarctica, likely triggering increased ocean levels. 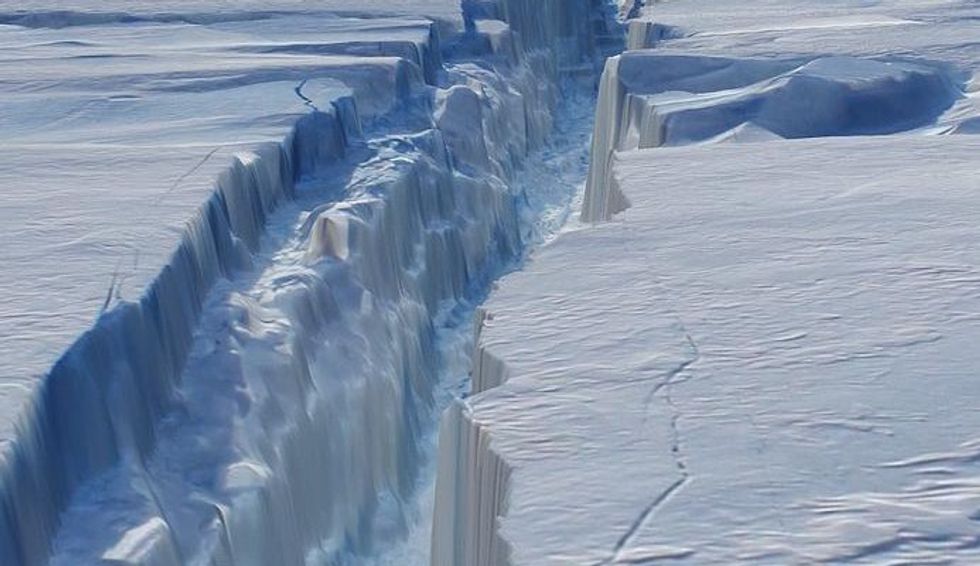 One of the ten largest icebergs known to science—roughly the size of Delaware—is about to break off from Antarctica. This would be one of the largest breakoffs ever recorded, and could trigger a breakup of the northernmost ice shelf in Antarctica, known as Larsen C.

Although the break has been steadily growing for about a decade, the rift has accelerated in recent months. In the six months preceding August 2016, the rift grew 22 kilometers. Then, “[a]fter a few months of steady, incremental advance since the last event, the rift grew suddenly by a further 18km during the second half of December 2016,” said Professor Adrian Luckman, lead researcher at the UK-based Project MIDAS, and a scientist at Swansea University.

That leaves just 20 kilometers of ice standing in the way of the 5000-square foot iceberg floating away. “If it doesn’t go in the next few months, I’ll be amazed,” added Luckman. “It’s so close to calving that I think it’s inevitable,” he continued.

This split will significantly change the landscape of Antarctica, causing the shelf to lose 10 percent of its area, and leaving it at its most retreated position ever recorded.

Because Larsen C already floats on the ocean, its destruction won’t contribute to sea level rise on its own. However, it holds back many land-based glaciers. When it disintegrates, the glaciers will flow out into the ocean. The increase of ice is expected to increase global sea levels by about 3.9 inches. Compare this to the rise in global sea levels over the last 20 years, at 2.6 inches.

“We would expect in the ensuing months to years further calving events, and maybe an eventual collapse—but it’s a hard thing to predict, and our models say it will be less stable; not that it will immediately collapse or anything like that,” Luckman advised.

The breakoff of Larsen C will be preceded by that of Larsen A and Larsen B. The earlier two breaks were “unequivocally climate change-related,” said Martin O’Leary, a researcher at MIDAS. But researchers have not linked global warming to the current split.

“We don’t think there is a strong link to climate change in terms of the provocation of the crack in question. . . but we couldn’t work that out,” said O’Leary. There is however much evidence linking warmer temperatures to ice shrinkage elsewhere on Antarctica.

Whatever the cause, the breakage is sure to be dramatic and profoundly change the face of Antarctica, said O’Leary. “One could say that no one lives there and no one cares, but I think it’s alarming that, essentially, this piece of land and unique environment could just not be here anymore pretty soon.”