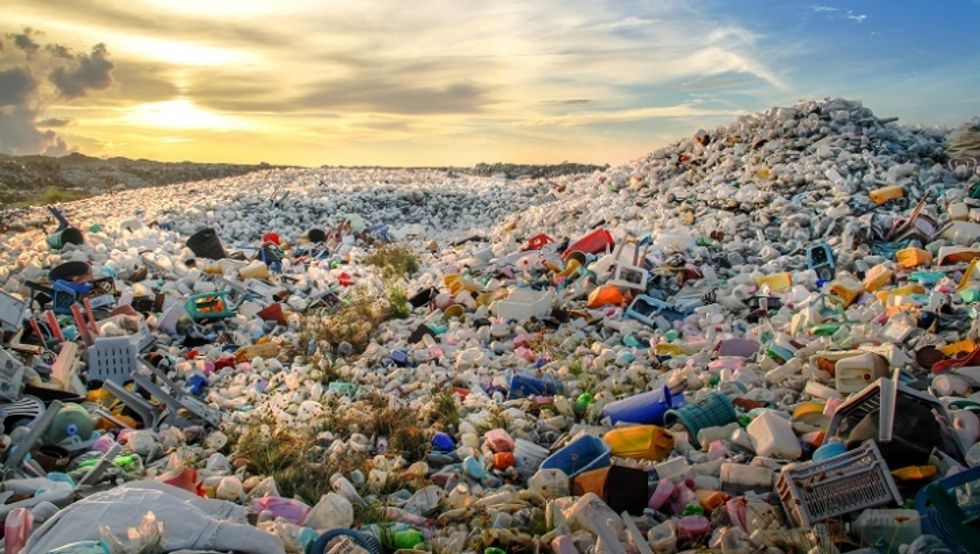 Plastic has long been touted as a wonder material, but its growing environmental impact is becoming too large to ignore.

18.2 trillion pounds of plastic have been produced since1950. In practical terms, imagine 1 billion elephants, or 80 million blue whales, the largest animal to ever have existed on Earth. Now imagine that 91 percent of that plastic ending up in a landfill, or worse, littering the ocean floor. Of that 18.2 trillion pounds, only 9 percent has ever been recycled.

Facing shortages of natural materials such as silk and rubber during the Second World War, military research into plastic applications boomed and created a ready-made industry after the war. Plastic production has increased exponentially, with half of all plastic made in thelast 13 years.

As more plastic is produced and less is diverted from the waste stream, the ecological consequences will continue to mount. Researchers estimate that by 2050, 12 billion metric tons (13.2 tons) of plastic will end up either in landfills or the naturalenvironment.

"Most plastics don't biodegrade in any meaningful sense, so the plastic waste humans have generated could be with us for hundreds or even thousands of years,"said Jenna Jambeck, associate professor of engineering at the University of Georgia and co-author of a recent report on plastic production.

A separate independent study by the British research firmEunomia estimates that there may be up to 70 million tons of plastic waste on the sea floor.

The problem lies in the heavy use of plastic for disposable goods, and mainly in packaging. Unlike concrete and steel, the only other manmade materials produced in larger quantities, plastic has a relatively short shelf life before being discarded.

"Roughly half of all the steel we make goes into construction, so it will have decades of use. Plastic is the opposite,"said Roland Geyer of the University of California, Santa Barbara. "Half of all plastics become waste after four or fewer years of use."

Recycling alone won’t solve the problem. It’s often cheaper to make virgin plastics, especially if companies are quality controlling for individual characteristics, like hardness, durability or color. And thanks to the relatively low cost of petroleum, it’s likely to remain that way for the foreseeable future. Oil is also easier to turn into plastic than its nearest plant-based competitors.

The effects of plastic pollution are felt worldwide.

"There are people alive today who remember a world without plastics,"said Jambeck. "But they have become so ubiquitous that you can't go anywhere without finding plastic waste in our environment, including our oceans.”

Most famous among the oceanic “trash gyres” is theGreat Pacific Garbage Patch, a swirling mass of plastic in the North Pacific Ocean that’s larger than Texas. The patch, and others like it, are responsible for killing birds, fish, turtles and just about any other animal that happens to eat the plastic within. This phenomenon isn’t unique to the Pacific Ocean either, as scientists have discovered similar patches in the Atlantic Ocean as well.

In 2014, geologists from the University of Western Ontario reported finding a new type of stone that they referred to as “plastiglomerate”. This new rock, discovered on Kamilo Beach in Hawaii, is a combination of melted plastic, sand, and basalt.

Because plastic can take thousands of years to decompose, this new stone will contribute even more evidence our record of the Anthropocene, the period marked by human impact on the Earth’s ecosystem. A plastic bottle thrown away today could end up as a boulder hundreds of years from now.

Even if recycling rates improve, those billion elephants might remain part of the geological record forever.