China is politically and practically cooperating with the EU to develop new models for to reverse damage to the environment. Following designs in Europe, China is developing a forest city where tree and plant life will create numerous positive environmental effects. 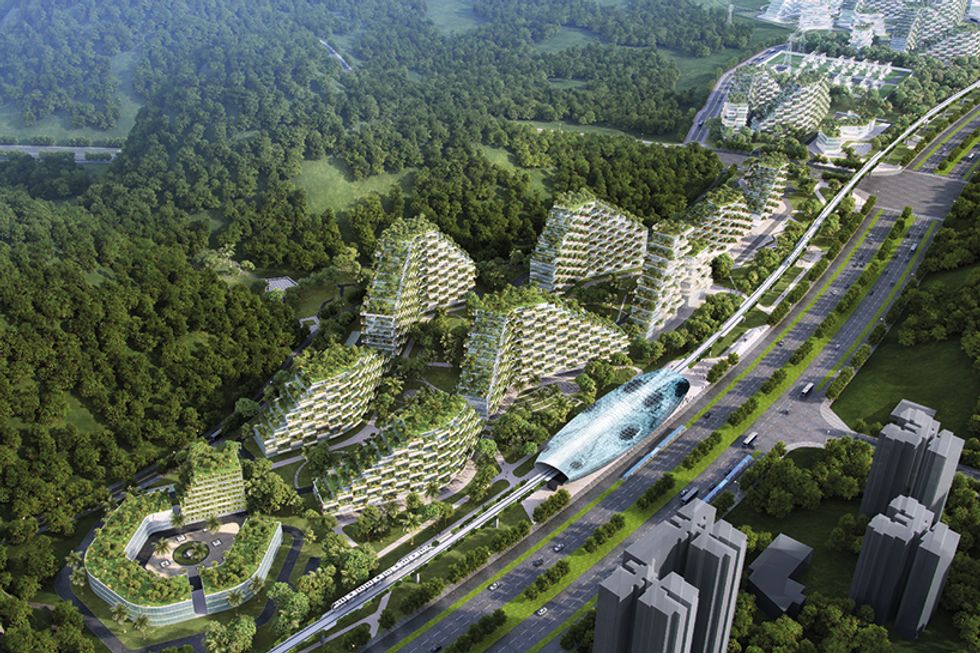 As the United States withdraws from the Paris climate agreement, China is taking steps to position itself as the EU’s partner to combat climate change. Following in the footsteps of a few European cities, China is building a city covered in forests, designed to reduce pollution in the atmosphere.

As the world’s largest contributor of global emissions, China is now working to forge stronger commitments with Europe to protect the world’s climate—in the absence of any expectation of U.S. assistance. In fact, China and the EU were scheduled to sign a Joint Statement on Climate Change, at a summit in Brussels on June 1, 2017. This signing was later derailed by trade disagreements, but rescheduled for a new climate summit to include Canada in September 2017.

Li Shuo, the climate policy adviser for Greenpeace East Asia, emphasized the need for the largest carbon emitters to fill the void from the U.S.’s impending absence from the Paris agreement:

“The rapid backlash of US climate action requires enhanced leadership from all other countries. At the upcoming EU-China summit, Beijing and Brussels need to demonstrate they are putting new and collective leadership into concrete terms. If US-China climate cooperation gave birth to the Paris agreement, now it is up to EU and China to defend and enhance it.”

An EU official explained that the use of clean energies “is a survival question for many Chinese cities and regions.” The official added, “Europe has unprecedented knowhow in this field – technological knowhow, and also legal and regulatory knowhow to promote the use of such technologies. This is therefore a key area of cooperation between us.”

Meanwhile, China has been following one of Europe’s most intriguing methods of fighting pollution. Italian architectural firm Stefano Boeri Architetti (SBA) has begun creating a city of trees in China, based on similar designs in Milan and Lausanne. And China is planning even moresuch developments in the cities of Nanjing, Shanghai and Shenzhen.

The model has been described as buildings made from giant jenga blocks, with trees planted on every surface. By growing the trees upward—to cover buildings that would likely exist anyway—instead of simply planting on the ground, a city can create more oxygen, absorb more carbon dioxide and dust, and provide other environmental benefits with far less land.

Liuzhou Forest City, known as the “Master Plan,” is being constructed to the north of existing Liuzhou, in the southern part of China. It will cover 175 hectares, or 432 acres, along the Liujiang river. The city was commissioned by Liuzhou Municipality Urban Planning, where offices, houses, hotels, hospitals and schools will be completely covered by 1 million plants—from 100 species—and 40,000 trees. Not only will the structures be covered in trees, but trees and plants will be distributed throughout the parks, gardens and city streets.

According to SBA, “Once completed, the new city will host 30,000 people, absorb almost 10,000 tons of CO2 and 57 tons of pollutants per year and produce approximately 900 tons of oxygen.” The Forest City will also generate other environmental benefits: decreasing average air temperature, providing noise barriers, and improving biodiversity. The tree and plant life will create new habitats for birds, insects, and small animals that reside within the Liuzhou territory.

SBA said, Liuzhou Forest City will “have all the characteristics of a fully energy self-sufficient urban establishment: geothermic energy for interior air-condition and solar panels over the roofs to get renewable energy.”

A fast rail line containing electric cars will connect the Forest City to the metropolis of Liuzhou, which is home to 1.5 million people. SBA projects completion of Liuzhou Forest City by 2020.

“For the first time in China and in the world, an innovative urban settlement will combine the challenge for energy self-sufficiency and for the use of renewable energy with the challenge to increase biodiversity and to effectively reduce air pollution in urban areas – which is really critical for present-day China – thanks to the multiplication of vegetable and biological urban surfaces.”