The Antarctic Research Station Is In Danger — Here’s Why. 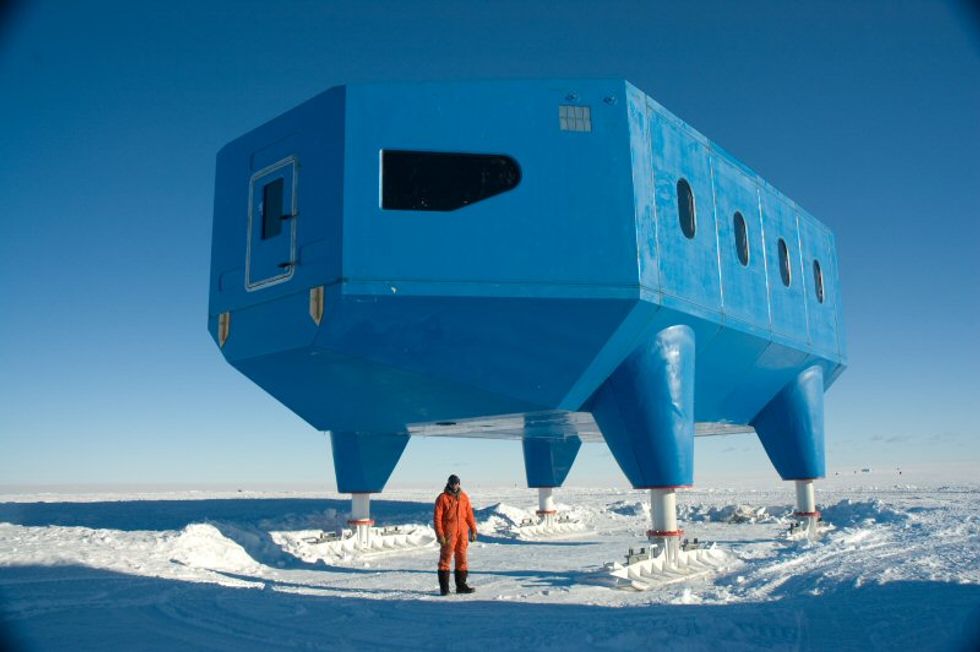 Widening at a rate of 15 centimeters per day, a vast chasm in Antarctica’s ice is threatening one of the world’s most notable research stations — the Halley VI Research Station, which was until recently otherwise comfortably established on the floating Brunt Ice Shelf in East Antarctica’s Weddell Sea.

The chasm — a sizable crack in the ice — was dormant for about 35 years before it further began splitting open in 2012. It has only recently become a threat, as the chasm currently menaces toward Halley VI at a rate of about 1.7 metric kilometers — or approximately one mile — per year. Though the risk of the crack opening up beneath the station and enveloping it entirely is low, the chasm does place Halley VI in jeopardy of drifting off into the sea. This means the station must relocate.

However, as the name implies, this is not the first version of the Halley Research Station, which is best known for its discovery of the ozone hole in 1985; Halley VI was, in fact, explicitly designed to handle such risks. In addition to serving as an international platform for global, atmospheric and space weather observation via its location in a climate-sensitive area, Halley VI is the world’s foremost relocatable research facility. Each module sits atop ski-fitted, hydraulic legs that raise and lower to accommodate changes in snow height and decouple for easy haul to a new location using tractors.

This means the station will be able to study climate change and sea levels from a new location — about 23 kilometers, or roughly 14.29 miles, across the ice from its current spot — when the time to resettle arrives.

Tim Stockings, the Director of Operations at British Antarctic Survey (BAS) explains, “Halley was designed and engineered specifically to be relocated in response to changes in the ice.” He notes that the operational teams at BAS are excited by the challenge of the move, as they have developed highly detailed plans for the event, which will take place during Antarctica’s short summers — nine weeks at a time — over the course of three years.

Due to Antarctica’s harsh environment and unpredictable weather, flexibility is key; scientists’ aim for the move is to disrupt science programs as minimally as possible. For these reasons, as well as the brevity of Antarctic summers, the move will occur in stages among the eight modules that comprise the station. Meanwhile, the infrastructure that collects environmental data will stay in place

as the other modules relocate.

Beginning in 2015, researchers surveyed the predetermined location, aptly called Halley VI, and identified a safe route for the periodic 27-week long trip. This process involved monitoring the ice and preparations to decouple the station’s modules. In 2016 and 2017, the task of housing the workforce in temporary containerized camps has taken precedence, along with the beginning stages of relocating modules.

As for the chasm itself, it lay dormant for at least 35 years until a satellite detected movement in the Brunt Ice Shelf in 2012. Due to the unpredictability of ice shelf movement, glaciologists were unable to determine for certain the extent of probable damage to Halley VI if it remained in its present spot.

In addition to the chasm slowly imposing on Halley VI, glaciologists have found a second crack about 17 kilometers — or 10.56 miles — in the same ice shelf in October. Running east-to-west along the ice shelf, this crevasse sits north of Halley VI. (It is not defined as a chasm, as glaciologists are uncertain as to whether this break in the ice reaches the sea. The term chasm is reserved only for such vast cracks.) Though it is narrower and shallower than the chasm causing Halley VI’s relocation, the crack does intercept one of the supply routes for the station, which could prove problematic.

Radar and satellite monitoring of the chasm in the Brunt Ice Shelf continues to determine the rate of spread; still, the movement of the 150-meter thick Brunt Ice Shelf is variable.

The Halley VI Research Station was moved only once before, in 2012, from its construction site to its present location.