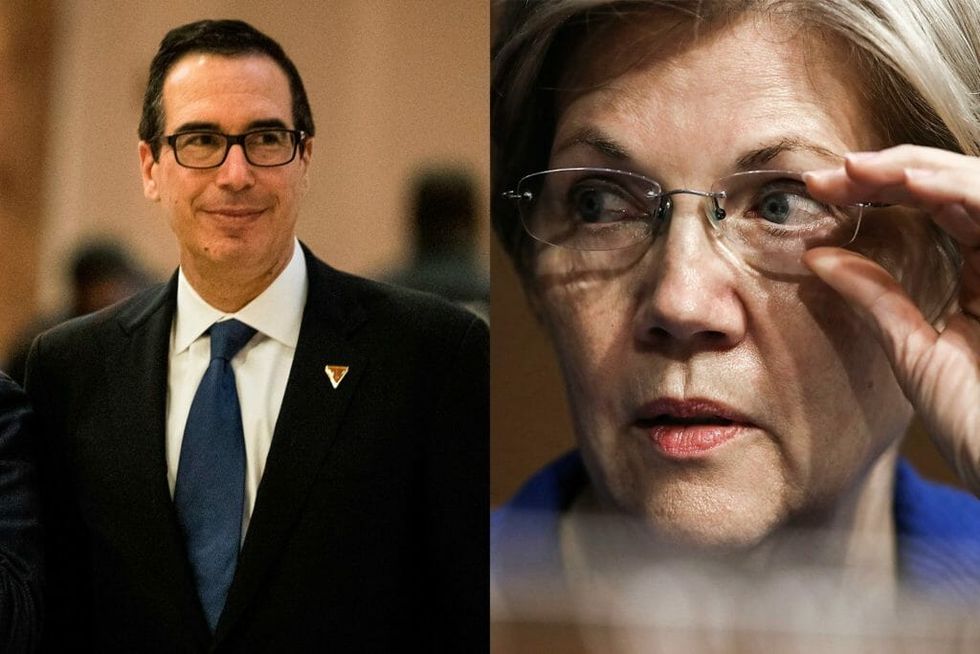 Senator Elizabeth Warren (D-MA) has triggered an investigation into Steven Mnuchin, the Treasury secretary, over political meddling in the tax policy office after The New York Times and several other media outlets revealed that Mnuchin, in pitching the $1.5 trillion tax overhaul he says will bolster economic growth, has been citing a report that doesn't exist. Mnuchin has promised that Treasury will release its analysis in full as the Senate prepares to vote on the first rewrite of the country's tax code in three decades, and has said that over 100 people in Treasury are “working around the clock on running scenarios for us.”

The administration has yet to release any type of tax analysis, however, and those inside Treasury’s Office of Tax Policy told reporters that they are not working on any analysis he has mentioned. In fact, an economist at the Office of Tax Analysis, who spoke to New York Times reporters on the condition of anonymity, said Treasury had not released a “dynamic” analysis indicating the tax plan will pay for itself with economic growth because one did not exist.

Rich Delmar, counsel to Thorson, confirmed Thorson is examining whether Mnuchin's refusal to release the Treasury Department's analysis of the tax plan is politically motivated. “It’s a top priority,” Delmar said, though he declined to provide a timeframe for when the inquiry would be complete, saying it would depend on how quickly Thorson receives the information and "how complex the issues are."

The investigation could also place President Donald Trump and his administration under renewed pressure to justify its claims about the economic growth the nation would experience and the revenue it says would exist as a result of the tax plan.

President Trump has continued to claim, however, that any opposition to the tax plan is a conspiracy by "Obstructionist Democrats."

In another tweet, he referred to The New York Times as "the pipe organ for the Democrat Party."

A recent and equally troubling report from the nonpartisan Congressional Budget Office (CBO) revealed that the plan “gives substantial tax cuts and benefits to Americans earning more than $100,000 a year”––hitting the nation’s poorest citizens particularly hard––and that the legislation would “add an increase in the deficit of $1,414 billion over the next 10 years.”