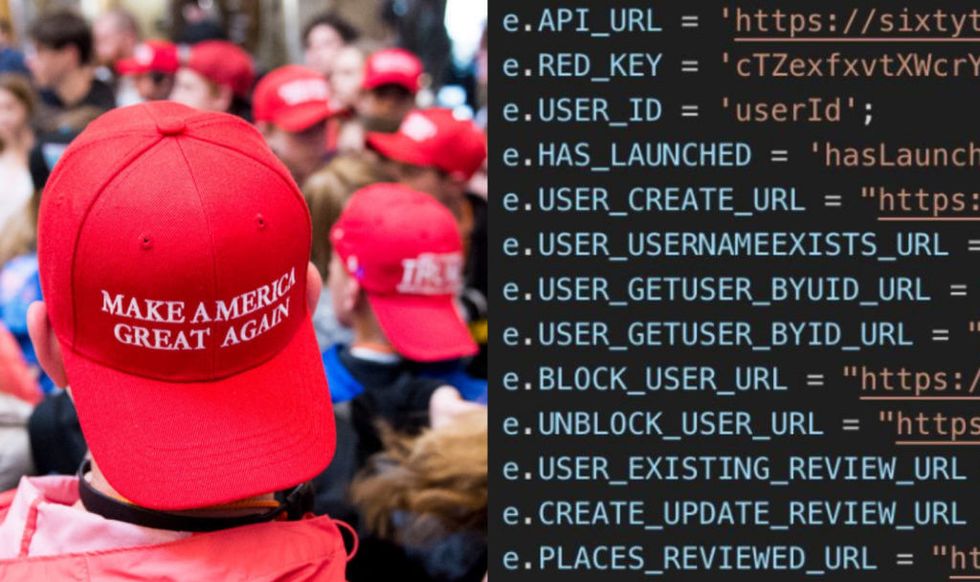 The designer of a new app for reviewing MAGA-friendly businesses had a total meltdown on Tuesday after an internet researcher discovered major security flaws in the app's coding.

"63red Safe works like a conservative Yelp," The Daily Beast reported on Monday. "Instead of reviewing the lighting and ambience, though, the site’s users rate restaurants and other businesses on a series of four questions, including whether the restaurant’s owners make political social-media posts and whether they allow customers to carry weapons."

Within hours after the launch, a French security researcher with the moniker "Elliot Alderson" (a reference to Mr. Robot) was able to gain access to the backend of the app, which was completely unsecured, leaving users' data at risk.

In a nutshell, Alderson was able to see that 4,466 people had signed up because no login credentials were needed to snoop around.

Alderson advised against using the app until the security features were upgraded. "@63red In order to #MAGA, you can start by learn how to code an application," he tweeted.

In response, 63red Safe's founder, Scott Wallace, said in a statement on Tuesday that he takes security "very seriously" and has "already taken action to additionally protect our data."

And then came the victim card.

"As we have seen across the United States, conservatives particularly have come under attack for their political beliefs — verbally, physically, and electronically," Wallace wrote. "This is unacceptable in a free society, and we will take every action to stop it, and assist our users in that as well."

Wallace said that he notified the FBI about the "politically-motivated attack" with the hope that "this perpetrator will be brought to justice, and we will pursue this matter, and all other attacks, failed or otherwise, to the utmost extent of the law."

Unfortunately for Wallace, this was a huge overreaction.

“I can understand 63red is angry but I’m here to help them, not the opposite,” Alderson told Gizmodo.

Alderson's discovery was not a crime, nor did he steal any data or mess with the site's digital infrastructure. All he did was point out vulnerabilities in the coding.

Looks like @fs0c131y 's research revealing a rookie security mistake of having NO authentication on an API has trig… https://t.co/yHfn9d56wy
— Katie Moussouris (@Katie Moussouris) 1552408665.0

Wallace and 63red Safe were savagely mocked for calling the feds on someone who was trying to make their online safe space safer.

@63red Threatening researchers will definitely make them stop looking for flaws in your security. It won't encourag… https://t.co/NJ4C1AJY5i
— David (@David) 1552411242.0

Maybe next time, Wallace should learn to code properly.

This is peak snowflake culture.

@63red "As we have seen across the United States, conservatives particularly have come under attack for their political beliefs" lolz
— divinci (@divinci) 1552419431.0

“Does this business serve persons of every political belief?” the 63red Safe asks its users. “Will this business protect its customers if they are attacked for political reasons?”

How this information is gathered, The Daily Beast noted, is unclear.

Wallace fears that in 2020, socialist forces on the left will present an existential threat to him and other MAGA believers.

“I believe that, between now and 2020, we’re going to see the rise of the socialist goon squad,” Wallace said. “I think Antifa was nothing compared between now and what’s coming in 2020. And I’m deeply concerned.”