New 'Oath' Ad From Navy Vet Democrat Powerfully Lays Out Why Donald Trump Must Be Impeached, and People Are Getting Chills 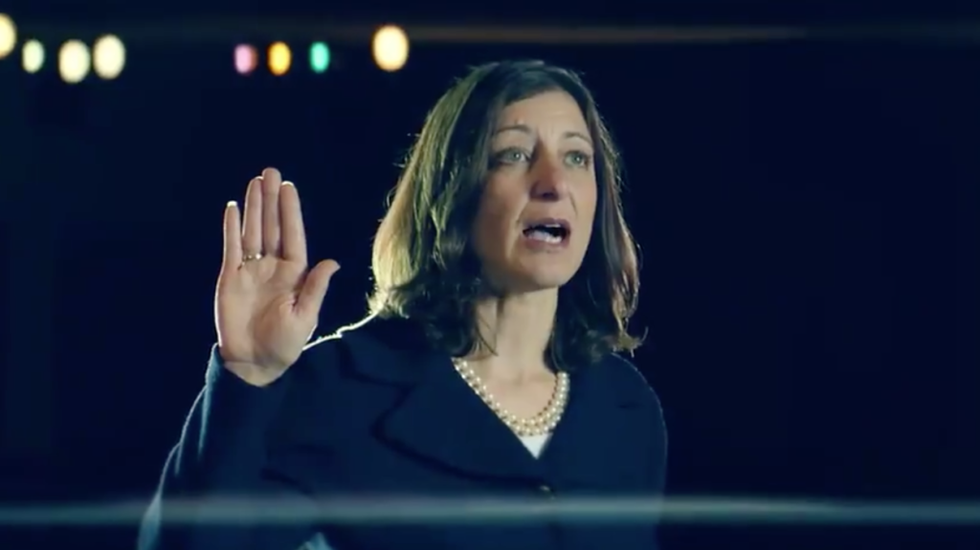 One of Virginia's most vulnerable Democratic Congresswomen, Elaine Luria, kicked off her reelection campaign with a powerful new ad detailing her two decades' of service and the reverence she holds for the Oath of Office.

Luria mentions in the ad that she first took the Oath at 17 years old upon entering the Naval Academy, taking the Oath again many times over with each promotion and, most recently, when inaugurated into Congress in January 2019.

Watch the powerful ad below.

The ad shows Luria taking the Oath of Office once again, interspersed with clips of iconic Americans like Rev. Dr. Martin Luther King Jr., as well as clips of Trump and his cronies lying to discredit impeachment inquiries.

Congresswoman Luria took the risky move to endorse the proceedings against President Donald Trump last month—a decision she highlights in the ad:

"I didn't come to Washington to impeach the President, but I also didn't spend 20 years in the Navy to allow our Constitution to be trampled on."

While the Congresswoman's words in the ad note that she may receive criticism for her choice to back impeachment, but that she knows she did the right thing.

Luria's ad has gone viral, with Americans across the country thanking her for service on Veterans' Day.

@ElaineLuriaVA @realDonaldTrump Thank you for your service. It’s not hard to see this president and the Republican… https://t.co/YOG5F04Pnw
— Lisa Anne (@Lisa Anne) 1573481981.0

@ElaineLuriaVA @realDonaldTrump Thank you for your strength, patriotism, leadership and integrity. I live and vote… https://t.co/sXDSv7Zzqi
— Emoluments Clause (@Emoluments Clause) 1573487180.0

In a time when government corruption seems at an all-time high, Luria's sincerity struck a chord with many of the ad's viewers.

@ElaineLuriaVA @realDonaldTrump It’s great to see someone so serious about such a great moment in your life, only a… https://t.co/wTtlOjkRqE
— flipper (@flipper) 1573493535.0

@ElaineLuriaVA @realDonaldTrump Thank you for taking your oath seriously! I feel that someone in the WH absolutely… https://t.co/LBTfPp4Uc2
— Wes (@Wes) 1573499293.0

Luria is likely to face a tough campaign in her bipartisan district in 2020, but the reverence she holds for her country is already moving voters.

If her ad moved you, you can donate to her campaign here.