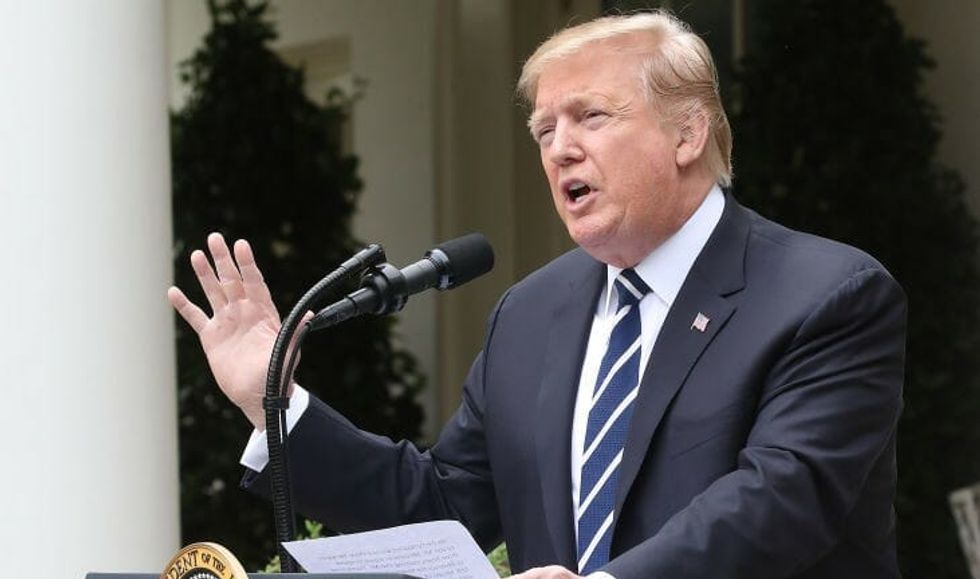 President Donald Trump spoke about the Mueller investigation in the Rose Garden May 22, 2019 in Washington, DC. (Photo by Mark Wilson/Getty Images)

On Wednesday President Donald Trump gave a press conference in the Rose Garden to address the Mueller investigation and other ongoing investigations. While the President's threat to not address needed infrastructure maintenance and repairs is not funny, his handwritten notes for his latest press appearance are proving otherwise.

Botsford shared his photo as well.

People shared different angles and perspectives of the photo to capture all of the handwritten notes' contents.

"Achomlishments" stood out for many people.

@DanEggenWPost @KevinMKruse @jabinbotsford Judge a man not by his spelling but by his achomlishments
— Roger Wilson (@Roger Wilson) 1558579282.0

@krassenstein @realDonaldTrump The fact that he even needs notes is embarrassing enough. I see our Democratic presi… https://t.co/Sjq6xooF1a
— D Lee (@D Lee) 1558628704.0

And of course, then came the jokes.

"Achomlishments" was not the only word questioned.

Some Democrats decided to share their "achomlishments" for the President.

This is not the first time President Trump's notes drew attention. His note cards for a meeting with the students of Marjory Stoneman Douglas High School also required close scrutiny.

Once again people remarked on the President'd use of a permanent marker to write.

Trump's impromptu remarks—complete with signage and prepared handwritten misspelled notes aside—may be humorous on some level. But the purpose should be noted.

President Donald Trump told Democratic leaders and the people of the United States that no infrastructure needs will be met unless all investigations into his potentially illegal activities cease.

And that is no laughing matter.