Exit Poll Confirms Why Donald Trump Does Deserve Credit for the Midterm Election Results, Just Not For the Reason He Thinks 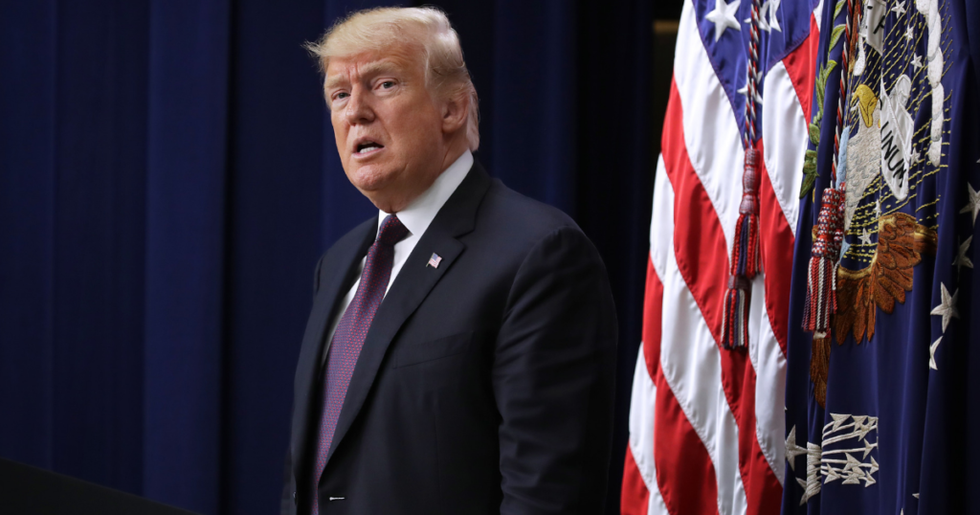 WASHINGTON, DC - NOVEMBER 15: U.S. President Donald Trump delivers remarks during a conference with federal, state and local veterans leaders in the Eisenhower Executive Office Building November 15, 2018 in Washington, DC. Trump listed all of his administration's accomplishments and promised the invited guests there would be more to come. (Photo by Chip Somodevilla/Getty Images)

“Tremendous success tonight,” Trump wrote in a tweet. “Thank you to all!”

Trump also tweeted that those who "worked with me... did very well."

In the week since the midterm, one new survey shows that Trump was indeed correct; he definitely motivated people to vote. But not for the reason he'd like to believe.

An Edison Research exit poll published on CNN found that Trump's popularity is far less abundant than he thinks. In the poll, Trump's overall disapproval rating was clocked at 54 percent.

When asked how they view Trump as president, 90 percent of respondents that disapprove of Trump's job performance voted for a Democratic House candidate.

"That was the worst performance for the president’s party among disapproving voters since Ronald Reagan in 1982," noted The Atlantic.

Conversely, in those same years, voters that held approval of the president supported the party in power between 84 and 87 percent. In 2018, that number was nudged slightly upward to 88 percent.

This is because of 21 Senate races that were electorally favorable to Trump and the Republicans. But the Atlantic notes points out that even though Republicans held the Senate, opposition to Trump drove Democrats to the polls.

"Exit polls were conducted for 21 Senate contests in which a Republican faced a Democrat. Democrats won at least 90 percent of voters who disapproved of Trump in 15 of those 21 contests, and up to 89 percent in five more. Scandal-tarred New Jersey Senator Robert Menendez was the only Democratic candidate to win a smaller share of voters who disapproved of Trump, at 79 percent."

Democrats bucked the trend in Arizona and Nevada, however, where Democrats Kyrsten Sinema and Jacky Rosen energized enough of the Democratic base to capture Republican-held seats.

"That same formula in 2020 could threaten Republican Senate seats in Colorado, North Carolina, Arizona, and possibly Texas," said The Atlantic.

Beyond the Senate, however, the political landscape for Trump is bleak.

Nearly 60 percent of college-educated whites opposed Trump, along with 70 percent of non-whites. In fact, only 54 percent of white voters supported Republicans in House races across the country.

Democrats earned the votes of 90 of black voters, 69 percent of Latinx, 77 percent of Asians, and 54 percent of those who identified as "other."

Those disillusioned white voters, typically congregated in the suburbs of large blue cities, joined forces with every other demographic to give Democrats the momentum they needed to seize the House.

Age played a factor in Democrats' sweeping victory as well. Democrats carried the majority of voters aged 18-49, while Republicans were only able to grab ages 50 and up.

Parents and non-parents favored Democrats too, except for married men, 51 percent of whom sided with Republicans. Parents of all children under 18, regardless of gender, also supported Democrats.

Women vote Democrat by a margin of 59-40 percent, whereas men chose Republicans by a slim 51-47 percent.