The President of Ecuador Just Went Off on Julian Assange, Explaining Why They Withdrew His Asylum Status, and We Totally Get It 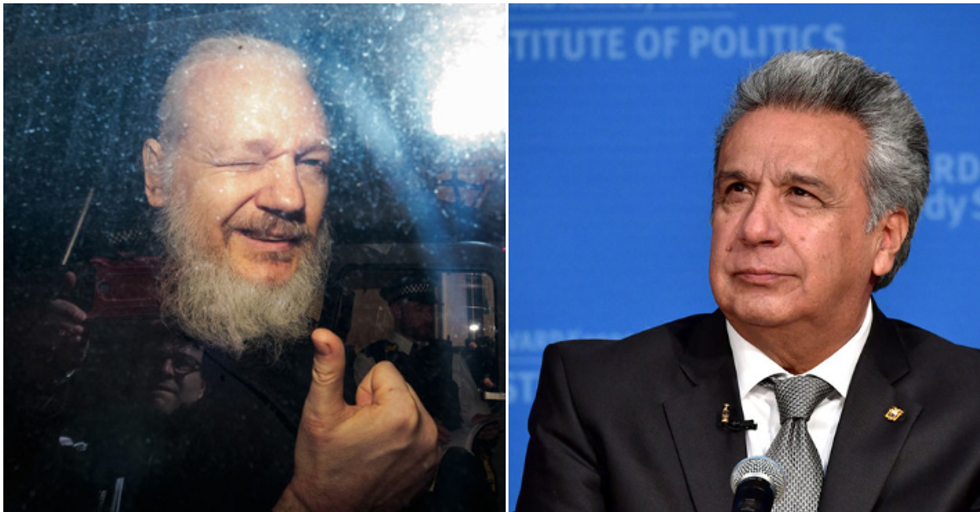 Julian Assange, the Australian programmer, created Wikileaks under the guise of a safe space for whistleblowers who feared death or imprisonment to share information. But it quickly became a political tool to be aimed at specific targets.

Whether or not Assange sold his website's services to the highest bidder is still unclear. But his one-time hero status definitely saw a revision as Wikileaks' political machinations were exposed.

The man himself spent the last seven years in an apartment created for him by the government of Ecuador in their small London embassy under a plea for asylum. However Assange wore out his welcome and was turned over to the British authorities this week.

"We’ve removed the asylum for this spoiled brat and, fortunately, we’ve gotten rid of a thorn in our side."

During the President's official statement,  shared on Twitter, Moreno shared a list of Assange's transgressions while a guest of his country.

In a speech, Moreno said:

"You can’t arrive at a house that welcomes you warmly, that gives you food, and takes care of you, and start to denounce the owner of the house."

"From now on we’ll be more careful in giving asylum to people who are really worth it, and not miserable hackers whose only goal is to destabilize governments."

"We are tolerant, calm people but we're not stupid."

During his official statement, Moreno pointed out he inherited the asylum situation from his predecessor. And according to Moreno's laundry list of complaints, Assange more than earned being shown the door.

"Today, I announced that the discourteous and aggressive behavior of Mr. Julian Assange, the hostile and threatening declarations of his allied organization [Wikileaks] against Ecuador, and especially the transgression of international treaties, have led the situation to a point where the asylum of Mr. Assange is unsustainable and no longer viable."

"For six years and 10 months, the Ecuadorian people have protected the human rights of Mr. Assange and have provided for his everyday needs at the facilities of our Embassy in London."

Then in a nod to his predecessor, Moreno said:

"When I became President of Ecuador, I inherited this situation and decided to adopt a protocol to set the daily life rules at the Embassy, which is the [least] anyone may expect from a guest hosted at his own house. Ecuador has fulfilled its obligations in the framework of international law."

But Assange thumbed his nose at the rules put in place by Moreno. He was abusive towards embassy personnel and broke numerous security protocols according to President Moreno.

Meanwhile Assange made several formal complaints about his accommodations and hosts. This all lead to the decision to end Assange's asylum within the London embassy.

But according to the Ecuadorian President, Wikileaks sent threats against their government to try to force them to maintain Assange's asylum. Moreno said his government had nothing to fear.

Assange arrived at the Ecuadorian embassy in 2012, gaining access disguised as a courier delivering a package. He was hiding from British authorities who issued a warrant for Assange stemming from two sexual assault charges in Sweden.

Ecuador spent an estimated $1 million per year protecting and providing for Assange.