It's coming from within the house. 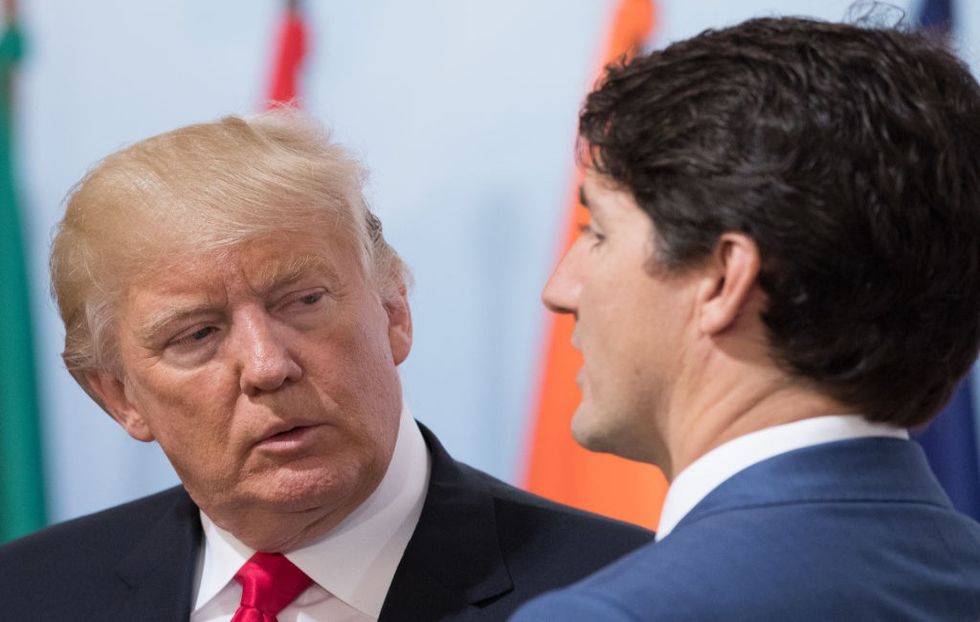 When President Donald Trump decided to ignore existing trade agreements with United States allies and impose tariffs on Canada, Mexico, Japan and the EU, it was on the premise it would be a boon for the U.S. economy. But a new analysis out of Trump's own White House says the opposite will occur.

The White House Council of Economic Advisers review of President Trump’s trade agenda concluded the president's tariffs will hurt economic growth in the United States. The only way Trump's tariffs can benefit the U.S. economy?

According to the chair of the Trump administration's Council of Economic Advisers, Kevin Hassett:

In other words, Trump's tariffs only work in the United States' favor if every single country spontaneously decides to balance all of their trade with the U.S. immediately. So far that has not been the reaction of countries the president just hit with new tariffs.

If only someone had warned the president this might happen....

Except someone, several someones did, including the U.S. neighbor to the north, Canada.

The United States has a trade agreement with Canada and Mexico, but Trump would like to see it nullified. Negotiated and initially signed by President George H. W. Bush in 1992, then ratified by congress and enacted under President Bill Clinton in 1994, the North American Free Trade Agreement (NAFTA) worked for 24 years until Trump decided it needed to be scrapped in place of tariffs of his choosing.

When Trump first spoke of eliminating NAFTA, both Canada and Mexico advised against scrapping it based on years of trade beneficial to the U.S. economy. After being hit with tariffs, despite the existing agreement, Canada and Mexico responded accordingly.

"Let me be clear," Canadian Prime Minister Justin Trudeau said after Trump made his announcement. "The tariffs are totally unacceptable."

These tariffs are an affront to the longstanding security partnership between Canada and the United States and, in particular, an affront to the thousands of Canadians who have fought and died alongside their American brothers in arms."

American tariffs on Canadian aluminum & steel are unacceptable. As we have said, we will always stand up for our wo… https://t.co/cacQ8Itu5q
— Justin Trudeau (@Justin Trudeau) 1527789605.0

Canada will also challenge these illegal & counterproductive measures under NAFTA Chapter 20 and at the WTO. It is… https://t.co/H7T0q8fMWT
— Justin Trudeau (@Justin Trudeau) 1527789606.0

Americans remain our partners, friends, and allies. This is not about the American people. We have to believe that… https://t.co/PZdy5Q4do1
— Justin Trudeau (@Justin Trudeau) 1527793881.0

Justin Trudeau said at a news conference with Emmanuel Macron that "we are going to defend our industries and our w… https://t.co/RtA9at0bcZ
— The New York Times (@The New York Times) 1528457409.0

American jobs are on the line because of [Trump's] actions and because of his administration."

"When we can underscore this, and we see that there's a lot of pressure within the U.S., perhaps he will revise his position," Trudeau said at a joint news conference with French president Emmanuel Macron.

A trade war doesn't spare anyone. It will start to hurt American workers, the cost of raw materials will rise and industry will become less competitive."

Republicans, generally supporters of open trade, warned against the tariffs as well. Texas Republican Representative Jeb Hensarling, chairman of the House Financial Services Committee, accused Trump of throwing "a huge wet blanket of uncertainty on an economy that otherwise they were responsible for making red hot."

Wall Street research firms also warned against tariffs. Researchers at Goldman Sachs state that the latest round of tariff escalations could reduce economic growth by as much as 0.15 percentage points in 2018.

As late as last year, a bipartisan group of former chairs of the Council of Economic Advisers penned a letter to the president urging him not to move ahead with steel tariffs. They warned "tariffs would raise costs for manufacturers, reduce employment in manufacturing, and increase prices for consumers."

It remains to be seen if Trump will accept any advice that contradicts him, from any source. But maybe if it appears on Fox & Friends....