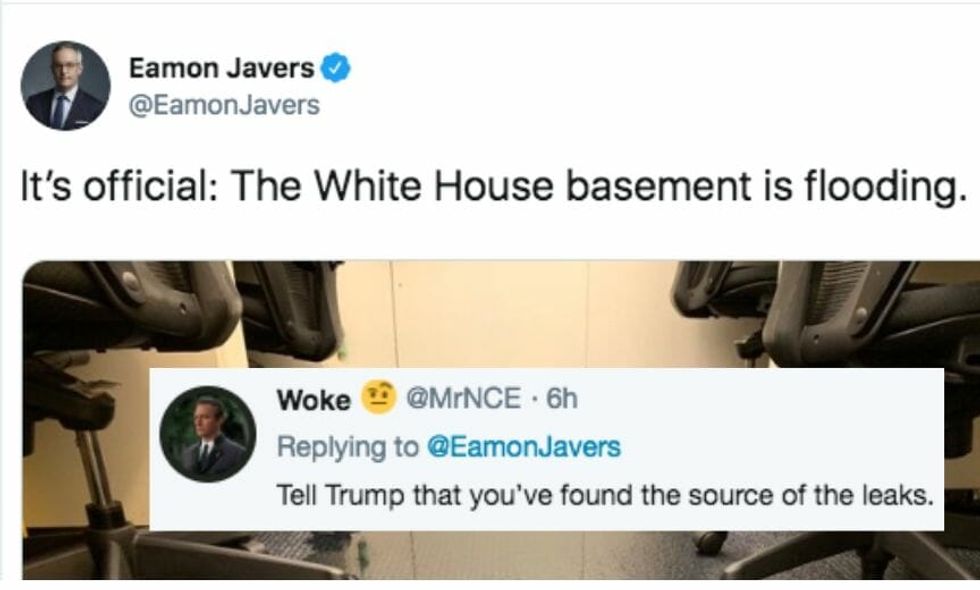 The image showed cubicles and desk chairs on a carpet with a spreading pool of water.

Then in a further update, the CNBC correspondent added:

"Update 2: WH staffers now looking for the source of the leak."

"That hole is really deep. There’s a ladder for people to climb way down below the surface."

People could not resist making jokes about a Trump White House plagued by leaks and mired in a swamp.

@EamonJavers These heavy-handed metaphors keep popping up to remind us that contrary to what was promised the White… https://t.co/4zPfE3b4bw
— Adam Best (@Adam Best) 1562598729.0

People had questions about the very long tunnel under the White House.

Some wondered if a recent event's funding could have been better used to fight the White House flooding.

Some thought perhaps the wet spot was not the result of the heavy rains or a water leak.

@EamonJavers Maybe it's when @realDonaldTrump peed himself when he learned of the Epstein arrest.
— Holden Caulfield (@Holden Caulfield) 1562594210.0

@EamonJavers Was that what happened when @realDonaldTrump found out about the Epstein arrest? https://t.co/rZJ6unFVNP
— Bonnie (@Bonnie) 1562598006.0

Others offered visual aids to the discussion.

#Earthquakes in #California; #Thunderstorms and #Tanks in DC; #Trump STILL in the @WhiteHouse? Can the Four Horsem… https://t.co/nNUlKnUNp2
— TrumpsBrain (@TrumpsBrain) 1562281863.0

The flooding is likely the result of heavy rapid rainfall that caused flash floods throughout Washington DC.

If you'd like to take a stab at draining the swamp, the card game DRAIN THE SWAMP is available here.