All the best people. 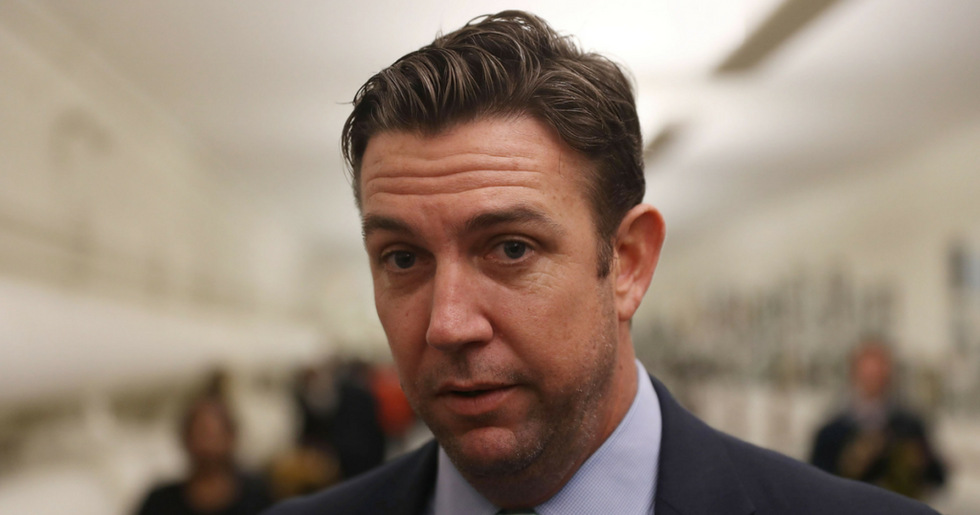 WASHINGTON, DC - JANUARY 10: Rep. Duncan Hunter (R-CA) speaks to the media before a painting he found offensive and removed is rehung on the U.S. Capitol walls on January 10, 2017 in Washington, DC. The painting is part of a larger art show hanging in the Capitol and is by a recent high school graduate, David Pulphus, and depicts his interpretation of civil unrest in and around the 2014 events in Ferguson, Missouri. (Photo by Joe Raedle/Getty Images)

The conservative California congressman and his wife stand accused of using more than $250,000 worth of campaign funds for personal purposes between 2009 and 2016.

The 47-page indictment includes counts of conspiracy, wire fraud, falsification of records, prohibited use of campaign funds, and aiding and abetting.

The Hunters "had less than $1,000 in reportable assets for each of the years 2009-2016," the indictment says, offering a possible motivator for their illegal activity.

"The funds were allegedly used for family vacations to locations such as Hawaii and Italy, as well as more mundane expenses such as dental work and school tuition," CBS reported on Tuesday. "The Justice Department also alleges that the Hunters used tens of thousands of dollars for smaller expenses such as fast food and video games."

Hunter is the second House Republican in as many weeks to be charged with financial crimes. Representative Chris Collins (R-NY) was indicted on charges of insider trading on August 8.

Hunter will be removed from his position on U.S. House committees and is facing calls for resignation from House Minority Leader Nancy Pelosi (D-CA), who said Hunter represents a "rampant culture of corruption" inside Republican circles. Hunter should resign to "affirm that no one is above the law," Pelosi said.

The Justice Department began its investigation of Hunter in June 2016, alleging that the Hunters filed false reports with the FEC to hide their nefarious spending.

The Washington Post on Wednesday broke down the 10-most damning accusations against the Hunters, who prosecutors say "knew that many of their desired purchases could be paid by using campaign funds."

1.When Hunter and his wife chatted with each other about how they were able to get cash from the campaign to spend on daily life, they allegedly said "it was great."

2. Margaret Hunter allegedly spent $200 on tennis shoes at Dick’s Sporting Goods, which she then claimed as being for an annual dove hunting event for wounded warriors.

3. When Hunter told his wife he needed to “buy my Hawaii shorts,” but he was out of money, she allegedly told him to buy them from a golf pro shop so he could claim they were actually golf balls for wounded warriors.

4. When the water utility company threatened to turn off their water, Margaret Hunter allegedly spent $300 in campaign funds to pay the bill.

5. Margaret Hunter allegedly spent $152 on makeup at Nordstrom and told the campaign it was “gift basket items for the Boys and Girls Clubs of San Diego.”

6. Another $394 from Macy’s was listed as “gift baskets for local organizations.”

7. In an attempt to justify spending campaign funds on a family trip to Italy, Hunter asked a naval base there for a tour. When officials said they couldn’t do it then, Hunter said, “Tell the Navy to go f--- themselves.”

8. They allegedly described the payment of their family dental bills as a charitable contribution to “Smiles for Life."

9. Margaret Hunter allegedly bought plane tickets for her mother and her mother’s boyfriend to go to Warsaw. She told the campaign it was for events in New Orleans and Kentucky.

Among the sloppier revelations from the indictment are allegations that Hunter, a former Marine, claimed he was using campaign funds for charity.