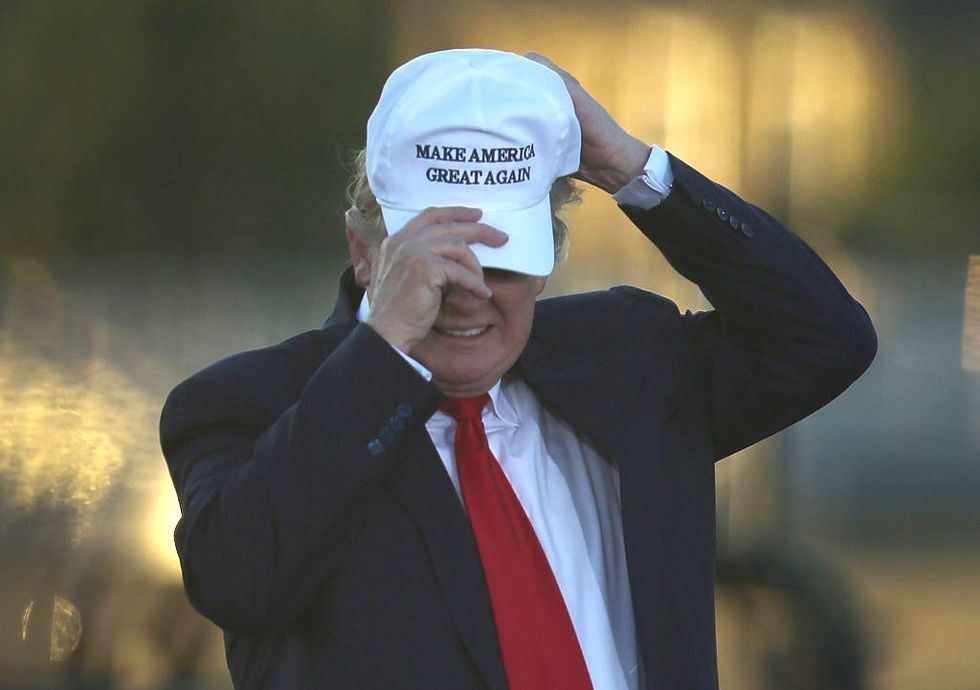 Certain slogans have become synonymous with the Trump administration. MAGA is an acronym most Americans know stands for Trump's campaign promise to "Make America Great Again".

Another Trump rally standard? Leading the crowd to chant "Build A Wall" then later, after his electoral college win, "Build the Wall."

Seen less often as a slogan is "America First" however it is the stance the president and members of his administration claim to be following in regard to foreign policy and immigration reform.

But was President Donald Trump the first person to use these slogans or chants at rallies? Actor Topher Grace recently pointed out he was not.

Grace plays Duke in Spike Lee's latest film BlacKkKlansman. The actor read one of Duke's books to prepare for the role.

Now David Duke has responded to that interview, with an image of Grace and the question "Will David Duke Sue Donald Trump for Intellectual Property Theft?". Duke says he will not sue, unless the president reneges on the promises Duke claims Trump made to white nationalists.

A publication quotes Topher Grace if I will sue Donald Trump for Intellectual theft of the political slogans he cop… https://t.co/SBh6PsOzh8
— David Duke (@David Duke) 1527446766.0

This isn't the first time someone made the connection between the president's message and that of white supremacists. It's a criticism that lead to questions about Trump's potential relationship with Duke during the 2016 presidential campaign.

Trump denied knowing who Duke is. When told the former Klan leader endorsed him, Trump repudiated the endorsement during an interview only because it “would make you feel better.”

The president is not the first member of his family with potential ties to the KKK. His father attended a rally in New York and was arrested there. It is unknown if Trump the elder joined the white supremacist organization.

Meanwhile, Duke praises and cautions Trump in equal measure on his Twitter feed. The president earned high praise from Duke for his defense of the white nationalists' deadly rally in Charlottesville.

However he also takes Trump to task frequently for not living up to what Duke considers their shared agenda, complete with often racist or antisemitic memes.

Response to Duke's claim he will sue Trump if he fails to keep his promises was immediate, but not all of it was negative.

@DrDavidDuke I wish you had more intelligent things to say. Then you might be interesting. But alas...this is what we have to read.
— Jabronie (@Jabronie) 1527551553.0

@DrDavidDuke What exactly did he promise you? To make America white again? The only one destroying our nation are p… https://t.co/58kyyCNycJ
— Garywdfld (@Garywdfld) 1527538371.0

No official response from the president or the White House was made as of Tuesday morning.