Donald Trump Just Threatened Democrats With Investigations If They Investigate Him, and Joe Scarborough Had the Perfect Response 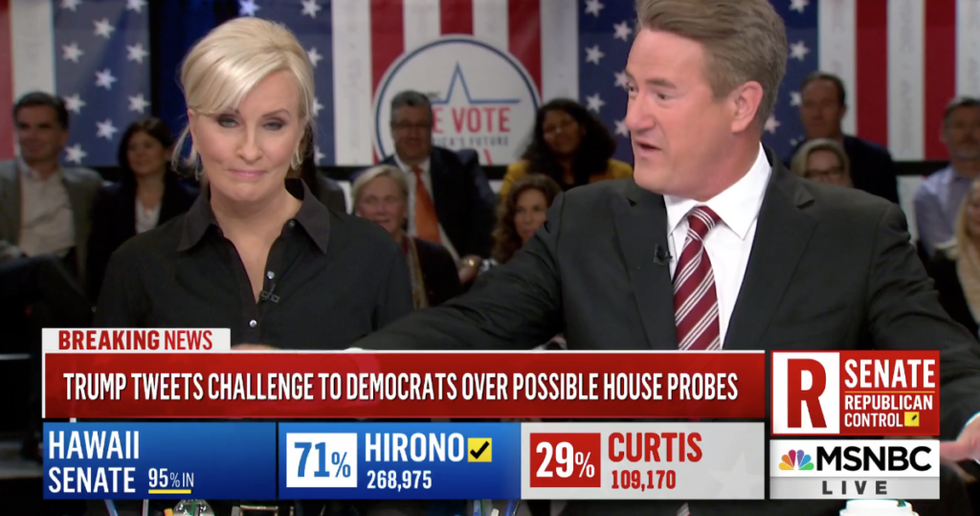 President Donald Trump on Wednesday threatened Democrats with investigations if the new House majority uses its subpoena power to investigate the president, referring to any further digging into his tax returns or business dealings as a waste of taxpayer money.

"If the Democrats think they are going to waste Taxpayer Money investigating us at the House level," Trump tweeted, "then we will likewise be forced to consider investigating them for all of the leaks of Classified Information, and much else, at the Senate level. Two can play that game!"

MSNBC's Joe Scarborough fired back at Trump's bluster on Morning Joe this morning by pointing out that Trump and the Republican Party no longer have unilateral power in Washington.

"Here's the news. Two are playing at that game, not one anymore. This is not a one-party system anymore."

Scarborough, a former GOP Congressman who left the Republican Party because of his disgust with Trump, explained that Tuesday's midterm elections are proof that our electoral system is still functioning.

Scarborough then praised Democrats for mounting a successful insurgency to Trump, culminating in winning control of the U.S. House of Representatives for the first time in a decade.

"The Democrats in the House helped put together and support some pretty extraordinary candidates that knew how to win Republican districts," Scarborough said. "They are big winners," he continued. "Let's tip our hats to the Democrats in the House. They put together great candidates and a great message and actually got a higher percentage of the vote in 2018 than the Tea Party did in 2010."

Twitter tore into Trump for his "waste taxpayer money" nonsense.

@realDonaldTrump Fixed it for you.... If the Democrats, who were duly elected by the American people, think they a… https://t.co/tDWBsoXbkO
— Jeff McKown (@Jeff McKown) 1541603972.0

How much taxpayer money has been spent on presidential vacations at Trump properties?

@wendmyoung @realDonaldTrump That spending needs to be on the list of things to investigate. I bet that they can fi… https://t.co/2HsWnjCBYv
— Lauren Down South (@Lauren Down South) 1541602745.0

Governing isn't a game, and the Senate is not at Trump's disposal to do with as he pleases (at least, let's hope not).

But the fun is only just beginning.

Representative Maxine Waters (D-CA), with whom Trump has sparred by saying she has a "low IQ," will chair the House Financial Service Committee. Come January, Waters will have the power to subpoena Trump's mysterious tax returns.

@realDonaldTrump Maxine Waters will have the power to subpoena your banking records. Have a good day.
— Denis (@Denis) 1541602689.0

Since Democrats now have control of the House, committee chairs belong to that party.

Adam Schiff (D-CA) will head the House Intelligence Committee, which has the power to reopen its investigation into Trump's ties to Russia.

@JoeNBC Adam Schiff will be chairman of the House Intelligence Committee.
— bbqcornnuts (@bbqcornnuts) 1541566734.0

On the Senate side, however, a greater Republican majority certainly means more appointments of right-wing judges and a tilted judiciary.

Congress will be a check against abusive executive power once more.

Though some are urging Democrats to avoid getting so mired in investigations that they forget to govern.

@JoeNBC For now. They need to be careful. Never ending Government shutdowns and Trump investigations will get them… https://t.co/6Fz9LJKPwi
— JonJon (@JonJon) 1541580431.0

For now, Democrats will have the opportunity to put the brakes on the extreme Republican agenda. Good luck, and don't f*ck it up.