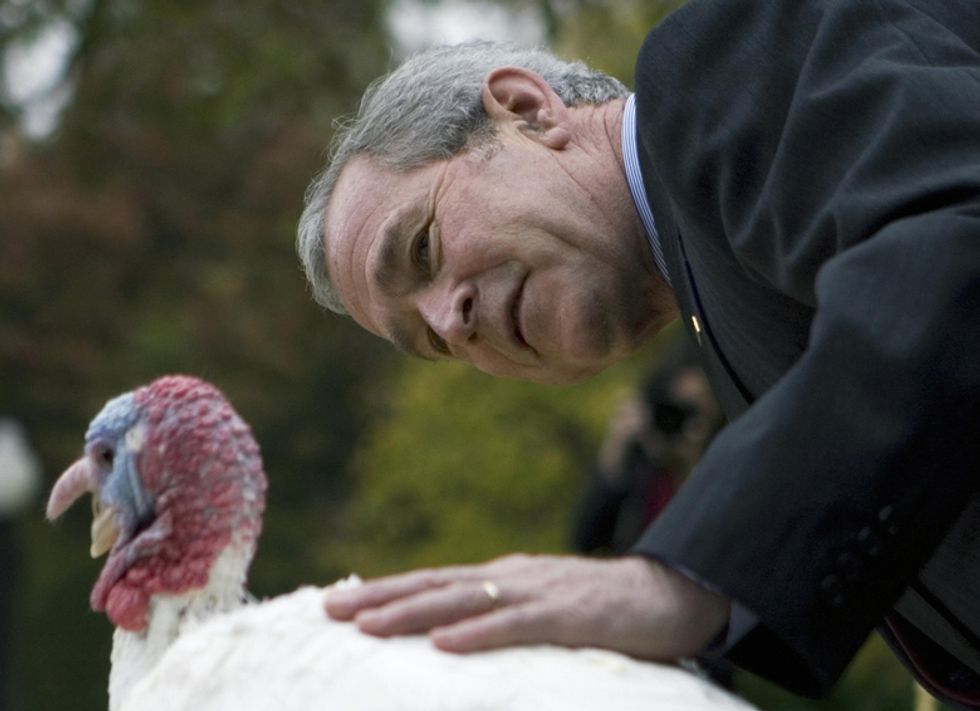 US President George W. Bush pets "May" the turkey during the pardoning of the Thanksgiving turkey on November 20, 2007 in the Rose Garden of the White House in Washington, DC, (MANDEL NGAN/AFP/Getty Images)

This afternoon, President Donald Trump will pardon two Thanksgiving turkeys, Drumstick and Wishbone. Watch it live from the Rose Garden with this live stream. According to the official White House schedule, the event will start at 1 p.m. ET.

The ceremony itself is officially called the "National Thanksgiving Turkey Presentation" and dates back to 1947 with President Harry S. Truman, reports the Washington Post. However, Truman did not pardon the turkeys he was presented with, but the pardon is sometimes incorrectly attributed to him because of his administration's request of the American people to ease up on eating poultry.

The Truman turkey presentation came about just after the end of World War II, and the consequences of it were still being felt. In an effort to conserve grain for foreign aid campaigns, the White House promoted "Meatless Tuesdays" and "Poultryless Thursdays" in the autumn of 1947. This did not go over well with the National Poultry and Egg Board. That year, not only Thanksgiving was on Thursday, but also Christmas and New Year's Day. As a compromise with the powerful poultry lobby, the Truman administration asked Americans to only give up eggs.

The modern turkey pardon didn't occur until 1989 when George H. W. Bush made it an annual tradition to "pardon" turkeys. Since then, every president has followed the tradition. Trump will be the fourth.

The first Thanksgiving between Wampanoag Native Americans and Puritan colonists occurred in 1621 and is sparsely recorded, but forms the basis for the modern celebration. The original 3-day celebration occurred in Plymouth, present-day Massachusetts, and was prompted by a good harvest. However, it is unknown if turkey was on the menu. History.com writes: