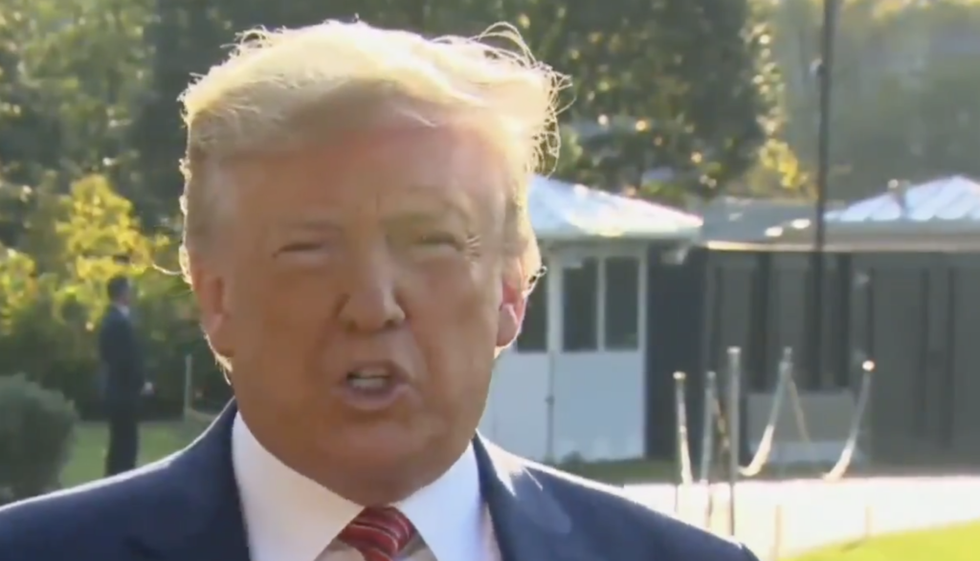 Claims that Joe Biden used the power of the Vice Presidency to end a Ukrainian investigation into the energy company his son served on as a board member have widely been debunked, but that didn't stop Trump from using the influence of the Oval Office in an attempt to trigger an investigation into his political opponent.

While corruption is nothing new for the Trump administration, what was surprising is Trump actually told the truth about it, to some degree, when speaking to reporters on Sunday morning.

Here is the president on the White House Lawn confessing that he asked a foreign leader to investigate his politica… https://t.co/FwL8pnPMCO
— Matt Rogers 🎙 (@Matt Rogers 🎙) 1569164894.0

Trump called his actions exactly what they were, saying:

Did he mean to say, "we discussed corruption"? Was he referring to his false claims about Biden? Is he just trolling us at this point?

Either way, Trump admitted to pressuring Zelensky to investigate the Bidens for his own political gain.

@Politidope @MalcolmNance He’s just a man, standing on 5th Avenue after shooting someone, asking a country to not care
— John Ruehl (@John Ruehl) 1569167613.0

@Politidope Hey @SpeakerPelosi I found that evidence you were waiting for. Anytime you want to #ImpeachTheMF it’s right here.
— LaserwithaG (@LaserwithaG) 1569197678.0

One might think that Trump is becoming more concerned as these allegations continue to blow up, but according to New York Times White House correspondent Maggie Haberman, the President is actually enjoying himself.

Then again, this doesn't look like the face of someone having fun.

House Speaker Nancy Pelosi (D-CA), to the frustration of some Democratic party members, has remained hesitant on impeachment, but these new Ukraine developments appear to have rattled even her.

This isn't going away any time soon.