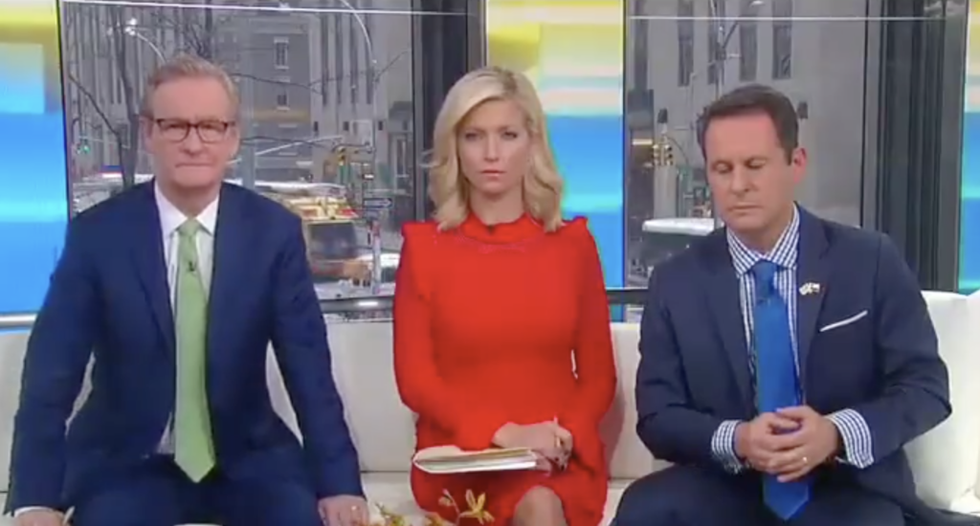 Diplomat and Ukraine expert Dr. Fiona Hill testified before the House Intelligence Committee overseeing the impeachment inquiry on Thursday, notably criticizing Republican lawmakers for pushing the conspiracy theory that it was Ukraine that hacked our election in 2016 and framed Russia for it.

Only one day later, President Donald Trump called in to Fox and Friends, repeating the same fictional narrative that Dr. Hill warned against.

Trump claimed that the Democratic National Committee—whose emails were hacked by Russia during the 2016—refused to give over their corrupted server to the FBI, instead giving it to a company called Crowdstrike, owned by a wealthy Ukrainian.

This is utterly false. There is no missing server, Crowdstrike has no immediate ties to Ukraine, and all evidence on the corrupted servers was given to the FBI.

Nevertheless, Trump spread the conspiracy theory on Fox & Friends just like he did on his infamous July 25 call with President Zelensky.

The other hosts, Brian Kilmeade and Ainsley Earnhardt, seemed doubtful as well.

@joshtpm @davidfrum Look at their faces. They are the family trying to deal with their crazy grandfather when he tu… https://t.co/tnTi2qdEHN
— Monica Martin (@Monica Martin) 1574433284.0

Still, Trump responded to Doocy's question with, "Well that's what the word is."

That is absolutely not what the word is, and people weren't afraid to tell him as much.

@joshtpm Crowdsrrike is an American company It is not owned by any Ukrainians The DNC servers were never in Ukraine… https://t.co/laQcE5CBgH
— Blue Bee (@Blue Bee) 1574432786.0

@joshtpm Everyone with a normal functioning mind can clearly hear that DT is not well. His accumulation of higgledy… https://t.co/1TQkUFJBbW
— Mom (@Mom) 1574432186.0

People had suspicions as to why Trump keeps obsessively peddling the debunked fever dream, and they all have to do with Russia.

@joshtpm @davidfrum Trump has to deliver sanctions relief to Putin. The only way to do that is exonerate Russia. Th… https://t.co/E5H5k3ZigH
— Karen Collins (@Karen Collins) 1574432000.0

When even the Fox and Friends hosts seem skeptical, you know the President is dead wrong.