Donald Trump Tweeted 'Thoughts and Prayers' After California Synogogue Shooting, and People Made Him Instantly Regret It 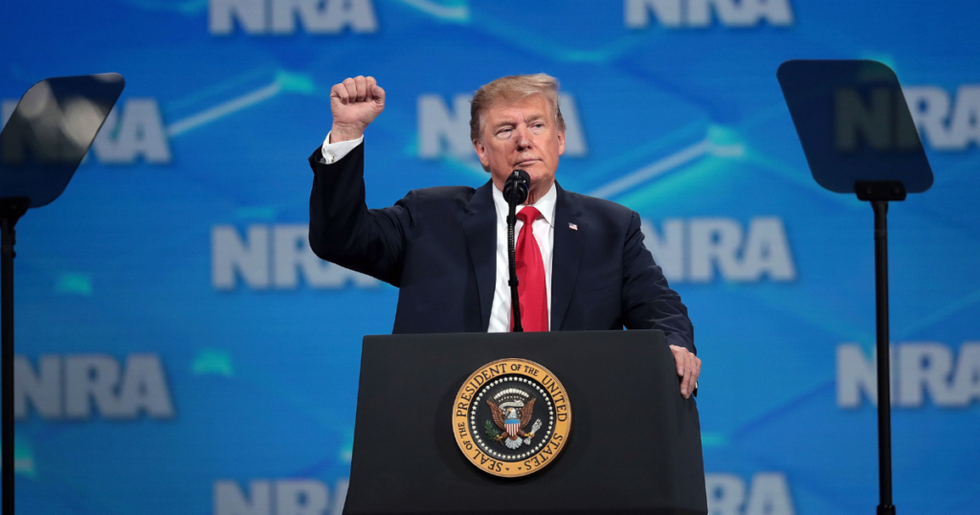 INDIANAPOLIS, INDIANA - APRIL 26: US President Donald Trump gestures to guests at the NRA-ILA Leadership Forum at the 148th NRA Annual Meetings & Exhibits on April 26, 2019 in Indianapolis, Indiana. The convention, which runs through Sunday, features more than 800 exhibitors and is expected to draw 80,000 guests. (Photo by Scott Olson/Getty Images)

In the wake of a deadly shooting at a California synagogue on Saturday, President Donald Trump offered his thoughts and prayers to the victims and their families. It was not well-received.

Trump sent the tweet after a 19-year-old gunman opened fire at the Chabad of Poway synagogue, killing one and injuring three others, including the temple's rabbi. According to eyewitnesses, the shooter's gun jammed, preventing him from furthering the slaughter. The suspect was arrested on site and the incident is being investigated as a possible hate crime.

"Thoughts and prayers to all of those affected by the shooting at the Synagogue in Poway, California. God bless you all," Trump wrote. "Suspect apprehended. Law enforcement did outstanding job. Thank you!"

Thoughts and prayers to all of those affected by the shooting at the Synagogue in Poway, California. God bless you… https://t.co/wdd5JTfyc8
— Donald J. Trump (@Donald J. Trump) 1556401265.0

For some Jewish groups and leaders, however, Trump's digital sympathy is too little, too late.

"We don't want your thoughts and prayers, we want you to stop inciting hatred," The Jewish Worker, a left-wing Jewish blog.

"We don't want your thoughts & prayers," Rabbi Jill Zimmerman of Orange County replied to Trump. "We want you to stop inciting hate, seeding the environment with divisions vs groups of people. You like executive orders. How about one banning assault rifles? Until then, save your 'thoughts & prayers.' Shabbat shalom"

Trump's coziness with white nationalists and lack of action of gun control - amplified by his fiery speech at the NRA-ILA Leadership Forum on Friday - render his condolences moot.

@realDonaldTrump Thoughts and prayers are useless when it comes to hate crimes and domestic terrorism, you syphilit… https://t.co/dcBff3FNSH
— Lesley Abravanel🆘 (@Lesley Abravanel🆘) 1556401523.0

@realDonaldTrump Anti-semitism is one piece of the wave of hatred and violence Trump has unleashed with his campaig… https://t.co/WQfcFEIUqY
— Philip 💥 Cohen (@Philip 💥 Cohen) 1556401305.0

Little love was shown for Trump and his rubber stamp response.

@realDonaldTrump The problem with your “Thoughts & Prayers” is that they come from a man who doesn’t pray and doesn’t think.
— Thorsten (@Thorsten) 1556401710.0

@realDonaldTrump Maybe you should have said something about guns and who uses them at the NRA. Maybe you had a mom… https://t.co/fDAZAEYPMb
— Ben Zane (@Ben Zane) 1556482394.0

But Rabbi Yisroel Goldstein, who survived the shooting, offered a very different perspective on Trump's handling of the crisis.

Trump "shared with me condolences on behalf of the USA, we spoke about the moment of silence, his love of peace for Judaism & Israel," Goldstein said at a press conference. "He's just so comforting that I'm really grateful to our president for sharing with us comfort and consolations."

@realDonaldTrump He shared with me condolences on behalf of the USA, we spoke about the moment of silence, his love… https://t.co/WPyuwnP1Q9
— Joel Fischer (@Joel Fischer) 1556535433.0

Still, the attack on Poway shares a common trait with most mass shootings - the use of an AR-15.

On Monday, Trump wrote on Twitter that he spoke to Rabbi Goldstein, whom Trump described as "a great guy" and "very special."

@realDonaldTrump Jews don’t really care about your “condolences” because we know, deep down, your compassion and em… https://t.co/bpJEgYfFA1
— Andy Ostroy (@Andy Ostroy) 1556535166.0

@realDonaldTrump If you would have just ended this tweet with the “what a great guy.” sentence it would have sounde… https://t.co/mQZ6cmpqBh
— Rage Donkey™️ (@Rage Donkey™️) 1556535183.0

In fact, Trump's defense of the NRA was stronger than his condemnation of gun violence.

"The NRA is under siege by Cuomo and the New York State A.G., who are illegally using the State’s legal apparatus to take down and destroy this very important organization, & others," Trump tweeted on Monday. "It must get its act together quickly, stop the internal fighting, & get back to GREATNESS - FAST!"

"People are fleeing New York State because of high taxes and yes, even oppression of sorts. They didn’t even put up a fight against SALT - could have won. So much litigation," he added. "The NRA should leave and fight from the outside of this very difficult to deal with (unfair) State!"

The person murdered in the assault - Lori Gilbert Kaye - was a long-time friend of Goldstein's. He described the moment he heard the first shot ring out:

"I walk into the banquet hall to wash my hands. I walked two, three footsteps when I hear a loud bang," Goldstein said. At first, he thought Kaye had fallen on her own, until he saw the shooter.

Unfazed, Goldstein then scrambled to protect children who were in the next room.

"I ran to gather them together," he said. "My granddaughter, four-and-a-half years old, sees her grandpa with a bleeding hand and she sees me screaming and shouting 'Get out! Get out!' She didn't deserve to see her grandfather like this."

And then - a lucky break.

"Miraculously, just miraculously, the gun jammed," Goldstein said. "And in attendance at the synagogue there was a border patrol, off-duty agent ... who recently discovered his Jewish roots."

The agent, Jonathan Morales, tracked the assailant to his car, where he opened fire. The scene inside was still chaotic.

"After the shooter left — this terrorist left — I turned around to assess the situation," the rabbi said. "I walk into the lobby and I see Lori lying the floor unconscious."

Goldstein said his friend was a dedicated member of the congregation. "For those of us that know Lori know that she is a person of unconditional love," Goldstein said.