Donald Trump Just Unveiled a Questionable New Justification for Arming Teachers in Schools, and People Are Dragging Him Hard 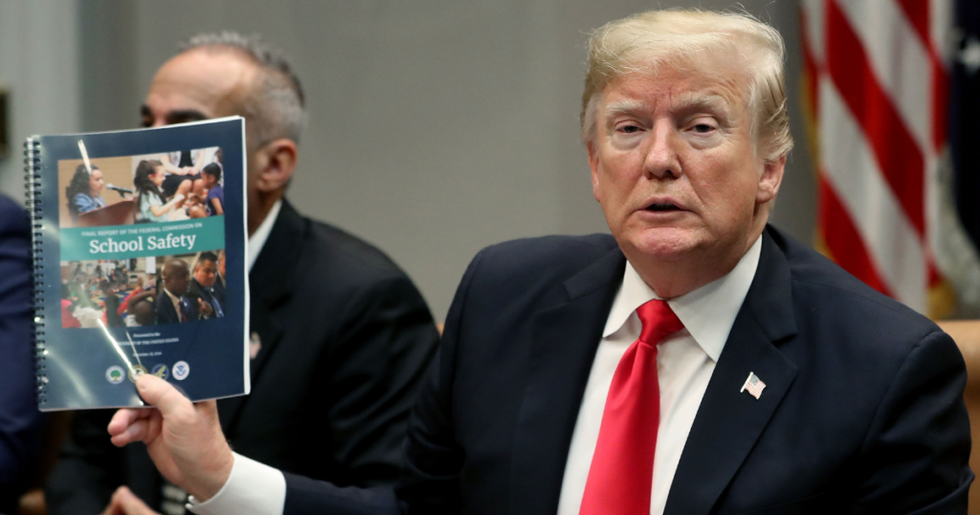 WASHINGTON, DC - DECEMBER 18: U.S. President Donald Trump holds up a copy of the Federal Commission on School Safety report during a roundtable discussion with family members of shooting victims, along with state and local officials, in the Roosevelt Room at the White House on December 18, 2018 in Washington, DC. (Photo by Mark Wilson/Getty Images)

President Donald Trump tried to justify his proposal to arm teachers by claiming that teachers want to carry guns in order to protect their students out of love.

"It’s critical to have armed personnel available at a moment’s notice," Trump said at a roundtable discussion about gun violence in schools. "These are teachers in many cases that are the highest trained that you can get."

Trump said teachers are "natural to firearms" and insisted that arming teachers is "critical to hardening our schools against attack," adding, "also, they love our students."

Twitter tore into Trump for suggesting that armed teachers and guns in schools would make for safer learning environments.

@politico I truly love my students. That's why I would never want them to have to depend on me to save their lives with a gun.
— EllenRosewall (@EllenRosewall) 1545167523.0

Many people noted that if Trump really wanted to support teachers, he would demand more funding for educational programs and pay teachers more money.

Trump also suggested that arming teachers would aid in "stopping tragedy before it strikes."

Education Secretary Betsy DeVos, seated next to Trump, lauded his response to the deadly shooting in Parkland, Florida last February.

"After the tragedy in Parkland, Florida, you took swift action," DeVos said of Trump. "No parent should fear for their child's life in school and no student or teacher should ever have to worry about their safety at school."

The "swift action" DeVos referenced did not happen.

Instead, Trump was assailed by survivors of the massacre at Marjory Stoneman Douglas High School for blaming the FBI for not preventing the shooter from obtaining his weapons. Trump exploited the deaths of students as an opportunity to say there was "no collusion" between himself and Russia.

"Very sad that the FBI missed all of the many signals sent out by the Florida school shooter," Trump tweeted three days after the shooting. "This is not acceptable. They are spending too much time trying to prove Russian collusion with the Trump campaign - there is no collusion. Get back to the basics and make us all proud!"

Very sad that the FBI missed all of the many signals sent out by the Florida school shooter. This is not acceptable… https://t.co/yvvTEmad2e
— Donald J. Trump (@Donald J. Trump) 1518926925.0

Trump's record on the issue is nebulous at best. In 2016, he knocked Hillary Clinton for claiming he was in favor of it.

The day after posting that tweet, Trump went on Fox News and said arming teachers would sometimes be appropriate.

Prior to this, twice in January 2016, Trump boasted about ending "gun free zones" in schools and on military bases.

Less than three weeks later, Trump told the Outdoor Channel he was "going to get rid of gun-free zones on military bases and I’m also going to do it in schools." He said he planned to "work with the states" or "perhaps override the states if I have to."

It appears his position hasn't changed.