We Now Know How Much Trump's Tariffs Will Cost the Average Taxpayer and, Yeah, It's a Lot 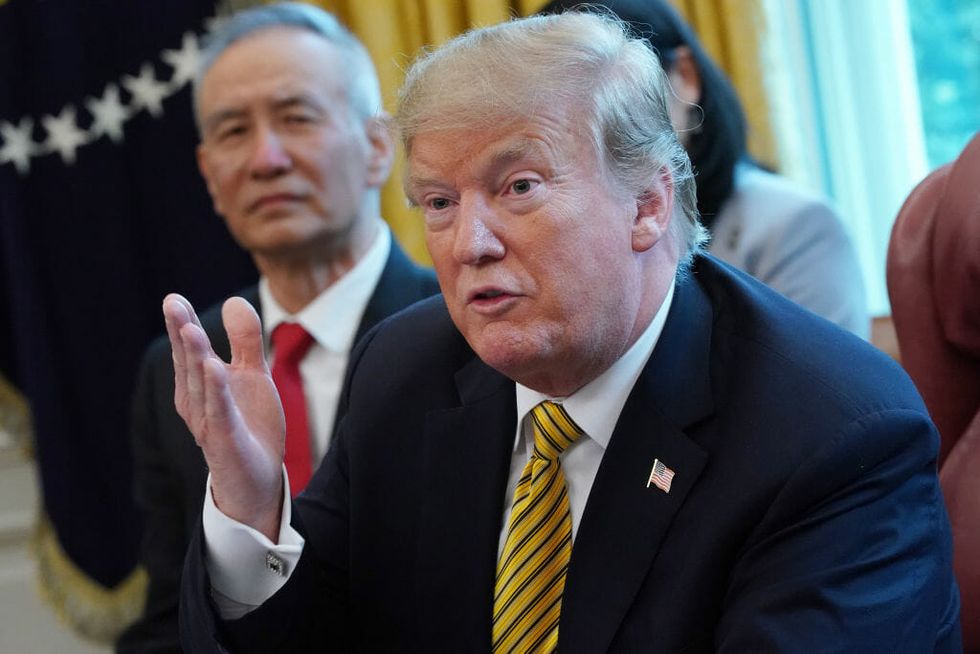 WASHINGTON, DC - APRIL 04: U.S. President Donald Trump (R) and Chinese Vice Premier Liu He talk to reporters in the Oval Office at the White House April 04, 2019 in Washington, DC. The New York Times reported Thursday that Trump is likely to announce plans for a future summit meeting with Chinese President Xi Jinping to resolve remaining trade issues and sign a final agreement between the U.S. and China. (Photo by Chip Somodevilla/Getty Images)

President Donald Trump's trade war with China, already costing American taxpayers $3 billion per month, may rack up an even bigger bill if Trump decides to levy tariffs on all $500+ billion worth of Chinese imports.

Politico reported on Tuesday that several independent studies estimate that additional tariffs would result in a tax increase for American consumers. And not we are not talking chump change here.

"The Peterson Institute for International Economics estimates the China tariffs amount to a tax hike of about $550 per American family. If Trump goes to 25 percent tariffs on over $500 billion in Chinese imports — hitting nearly every category of consumer goods from clothing and diapers to electronics — it could mean a $2,200 tax hike on the average family of three. By contrast, Trump’s tax cut gave middle-income families a tax cut of about $800, according to the Tax Policy Center."

An analysis by CNBC last week found that the "$72 billion in revenue from all the president’s tariffs" is "one of the biggest tax increases since 1993," CNBC said.  That figure amounts to the "largest increase as a percent of GDP since 1993 when compared with the first year of all the revenue measures enacted since then, according to the data."

Americans are already shouldering the entirety of the financial burden in Trump's trade spat with China, despite the president's intransigent insistence on the exact opposite.

Additionally, Deutsche Bank chief economist Michael Spencer has said that "the strong conclusion is that so far, U.S. consumers have borne substantially all of the tariff increase."

But trade wars are supposed to be "easy to win," right? That was Trump's assertion in March of 2018.

"When a country (USA) is losing many billions of dollars on trade with virtually every country it does business with, trade wars are good, and easy to win," he tweeted. "Example, when we are down $100 billion with a certain country and they get cute, don’t trade anymore-we win big. It’s easy!"

There is a new hashtag floating around, and it is pretty much perfect.

Farmers have been especially hardest hit because of retaliatory tariffs imposed by China, and Trump is now demanding another round of bailouts - courtesy of John and Jane Q. Taxpayer - to the tune of $15-$20 billion. But these patchwork subsidies will only go so far.

Thus, the Chinese have begun to shmooze alternative markets - including Russia, which has offered to pick up our slack - for numerous products such as soybeans, pork, and dairy.

Other industrial giants, including Nike, Adidas, Under Armour, Foot Locker, warned Trump on Monday that imposing additional tariffs would be "catastrophic" for American consumers.

"Any action taken to increase duties on Chinese footwear will have an immediate and long-lasting effect on American individuals and families," members of the trade group Footwear Distributors and Retailers of America said in a letter to Trump, United States Trade Representative Robert Lighthizer, Treasury Secretary Steven Mnuchin, Commerce Secretary Wilbur Ross and Larry Kudlow, the director of the National Economic Council. "It will also threaten the very economic viability of many companies in our industry."

They estimate that slapping another 25% tax on the remaining $325 billion worth of Chinese imports would amount to a $7 billion tax hike on consumers.

"We can assure you that any increase in the cost of importing shoes has a direct impact on the American footwear consumer," the companies wrote.

They added that they cannot simply ditch manufacturing in China and go somewhere else.

"Footwear is a very capital-intensive industry, with years of planning required to make sourcing decisions, and companies cannot simply move factories to adjust to these changes," they said.

Similarly, Walmart, the world's largest retailer, will be raising prices in order to offset its ballooning import tax burden.