When the nation looks to President Trump for comfort and support, he is conspicuously silent. 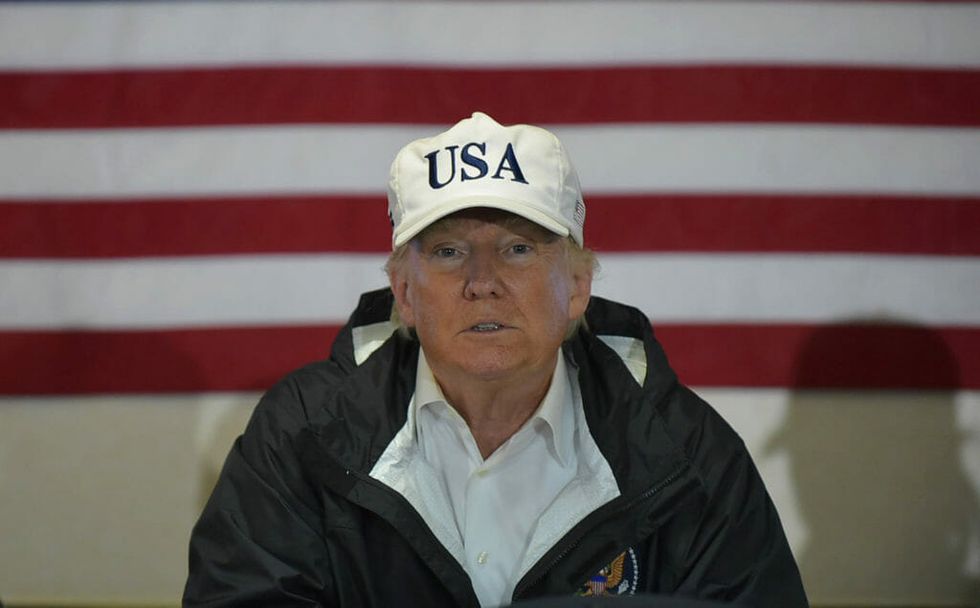 US President Donald Trump meets with US Virgin Islands Governor Kenneth Mapp in the Ward Room aboard the USS Kearsarge, off Puerto Rico on October 3, 2017. Nearly two weeks after Hurricane Maria thrashed through the US territory, much of the islands remains short of food and without access to power or drinking water. / AFP PHOTO / MANDEL NGAN (Photo credit should read MANDEL NGAN/AFP/Getty Images)

President Donald Trump is a master at stoking controversy and fomenting disunity, but he’s conspicuously absent when the nation looks to its Commander-in-Chief for comfort and solace.

Trump has turned a small NFL protest into a major plebiscite on national unity.

He has ridiculed the mayor of an American city ravaged by a hurricane.

He heightens tensions regularly in a nuclear standoff with North Korea, and openly supports white supremacists protesting with tiki lamps in North Carolina.

So why is a man so used to stream-of-consciousness spewing so reticent to speak words of unity and support? The good people of California, watching their hopes and dreams get burnt to a cinder, would really like an answer.

The California wildfires in 2017 have killed more than 40 people, destroyed more than 3,500 homes and business, cut a wide swath through California wine ritzy country, burned through millions of acres, and pushed first responders to the limits of their endurance.

And from the White House? Almost radio silence. (In fact, an editorial from The San Francisco Chronicle notes, “Americans expect their president to step forward with empathy and resolve in moments of national trauma,” the paper observed. And: “This is not a man who is reticent to let Americans know what is foremost on his mind.”)

Trump announced that he has spoken with Governor Jerry Brown, and noted that his administration would be with the  “people of California and be there with you in this time of terrible tragedy and need.” His Vice President, Mike Pence, expressed gratitude towards first responders.

Major California newspapers are furious with the president, and that sentiment is echoed throughout the state.

“In that way, the state is an eerily perfect microcosm of the nation, with coastal redoubts of Democratic influence giving way to vast stretches of Republican country,” writes Alexander Nazaryan in The Los Angeles Times. “Yes, Clinton won both Napa and Sonoma. But the nearby counties of Colusa, Sutter and Yuba went for Trump, and rather handily so...

“But we don’t mete out compassion based on voter registration, do we? When the fires come, it shouldn’t matter whether your bumper stickers extol the 2nd Amendment or the American Civil Liberties Union. Most Americans know as much. Does President Trump?”

It’s a distressing pattern of behavior.One week after Hurricane Maria all but destroyed Puerto Rico, the president had tweeted 16 times about sports, and nothing about the US protectorate.

Later, when Puerto Rico did enter his thoughts, it was often to castigate public officials or blame the overwhelming problems on the people living there.

It’s almost as the administration understands that to acknowledge a season filled with unprecedented natural disasters would be to acknowledge climate change, something this administration is loathe to do, as Environmental Protection Agency administrator Scott Pruitt works tirelessly to dismantle regulations that limit pollution and greenhouse gases.

Virtually every climate scientist alive acknowledges that while neither hurricanes or wildfires are caused by global warming, they are exacerbated by the changes in our weather. In California, years of drought have created tinder-like conditions so that small brush fires quickly become catastrophic. Warmer waters in the Atlantic and Gulf of Mexico add energy to hurricanes, increasing wind speeds and boosting the amount of moisture clouds can hold.

So climate researchers argue that there’s an unbelievable disconnect between what the EPA is doing, and what Mother Nature is doing. Perhaps that’s also why there’s a disconnect between the president’s Twitter feed and the things that are actually of life-and-death importance to Americans.