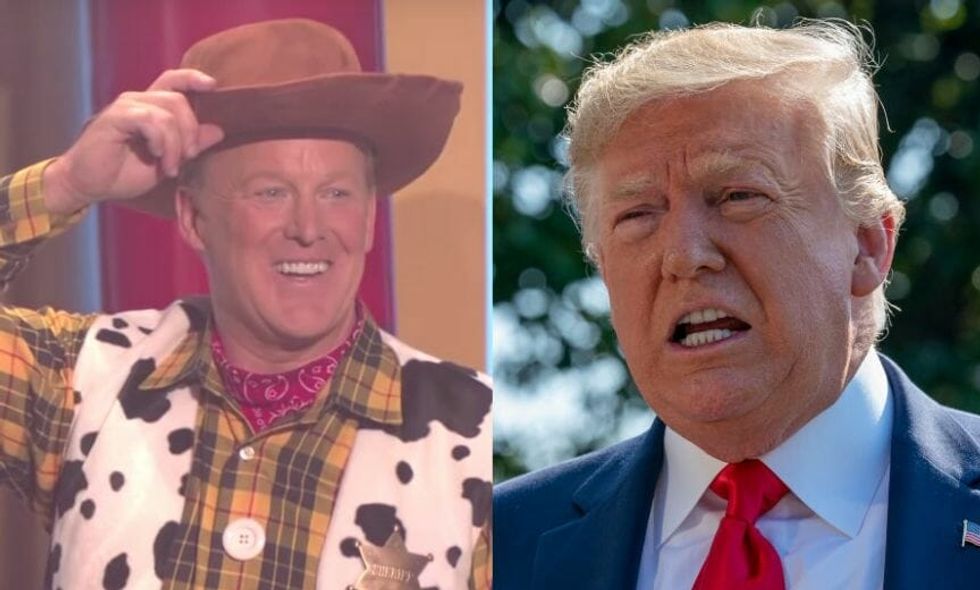 In early 2017, when then-White House Press Secretary Sean Spicer took the podium to give his first (then-daily) White House press briefing, few would have suspected that in just under three years and two press secretaries later, he would be competing on Season 28 of Dancing With the Stars.

But in the cosmic joke that is 2019, that's exactly what happened.

Trump tweeted a message of support for Spicer ahead of Monday night's episode, but after nearly eight weeks on the hit reality show, Spicer was eliminated from the competition, lasting about a quarter of his time as White House Press Secretary.

Then, Trump's tweet urging his supporters to vote for Spicer suddenly disappeared.

It was soon replaced with a fond farewell.

Despite consistently low scores from the show's judges, Spicer remained in the running all the way to semifinals, presumably due to Trump supporters eager to own the libs by perpetuating his presence on television.

This was in no small part due to Trump's weekly tweets in support of his former employee, which the President still found time to post amidst ongoing trade talks with China, impending impeachment, a $2 million dollar fine for charity fraud, unrest in Northern Syria, more tweets, and other distractions from reality television imposed by the Oath of Office.

@realDonaldTrump @seanspicer Like everybody else you endorsed, he lost. You are an albatross. You have the MidAss t… https://t.co/I0OtKBlvD8
— Howard (@Howard) 1573529539.0

@realDonaldTrump @seanspicer First it was Matt Bevin for #KYGov. Now it was Sean Spicer for #DWTS. Who will get t… https://t.co/PAMFl8LM2c
— TrumpsTaxes (@TrumpsTaxes) 1573528723.0

To Spicer's credit, he did give the country some memorable moments.

Maybe he'll reunite with his old boss on The Apprentice in a few years.