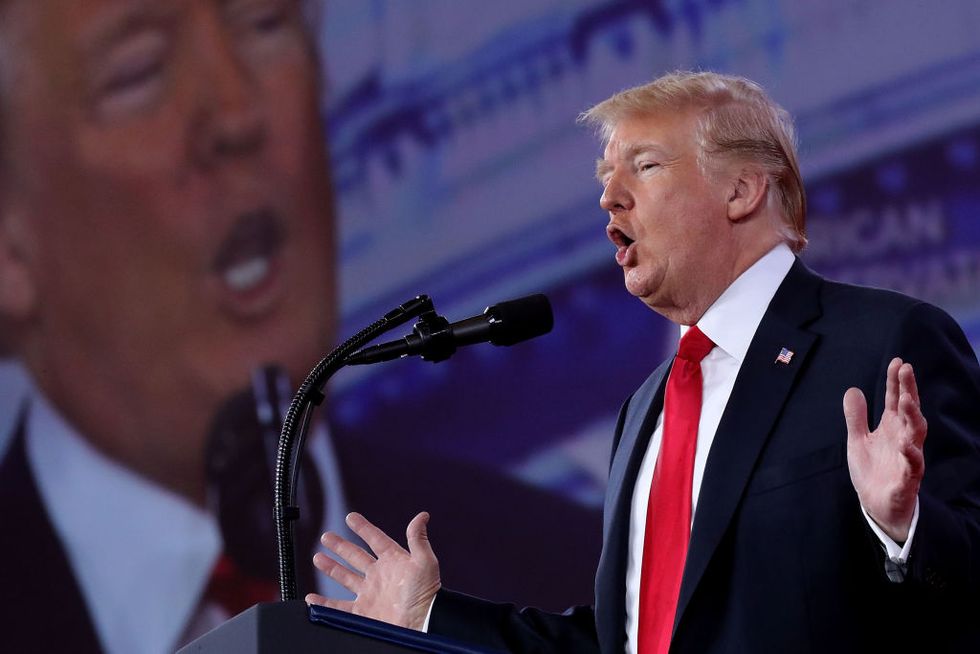 Speaking to reporters at the White House this morning, President Donald Trump called Scot Peterson, the armed school resource officer who stayed outside Marjory Stoneman Douglas High School in Parkland, Florida, as Nicolas Cruz gunned down 17 of his classmates, a "coward" who "did a poor job."

"When it came time to get in there and do something, he didn't have the courage or something happened, but he certainly did a poor job. There's no question about that," Trump said. "But that's a case where somebody was outside, they're trained, they didn't react properly under pressure or they were coward. It was a real shot to the police department."

Trump issued his comments a day after Broward County Sheriff Scott Israel said that Peterson was "absolutely on campus through this entire event" but that surveillance video, which the Sheriff's Office has not released, showed he "remained outside for upwards of four minutes."

We reported yesterday that the only armed sheriff's deputy at Stoneman Douglas High School was spotted in a parking… https://t.co/9XwFrKoWHK
— Patricia Mazzei (@Patricia Mazzei) 1519337891.0

But this wouldn't be the only time Trump would criticize Peterson for his response during the attack. The president took an opportunity to bring up Peterson during an appearance atthe Conservative Political Action Conference (CPAC).

"He didn't turn out to be too good, I'll tell you that. Turned out to be not good, not a credit to law enforcement, that I can tell you," he said.

Trump's remarks come as the nation grapples with his proposal to arm teachers. Many prominent figures––most notably the survivors of the Parkland shooting––slammed the suggestion. In fact, Felicia Burgin, a teacher at Marjory Stoneman Douglas, suggested the president and his supporters are using Peterson as a "scapegoat" and that he likely would not have been able to save any students.

"The bottom line is I don't think him [Peterson] going into the building would have prevented any deaths," Burgin said. "By the time he got over to the building, the shooter––the gunman––was on the third floor. There were children in the hallway that he was shooting. Um, if Officer Peterson was up there, he would have been in a spot to shoot in a hallway where not only the shooter was, but where other children were."

So I think Delaney [Tarr] said it best when she said there are other things to focus on: Changing the laws, making the school safer going forward. I think that Officer Peterson is being used as a scapegoat, and people are angry right now. They're angry, they're hurting, and now, all their hurt is being directed, to me, in the wrong direction. You want to be angry at something? Be angry at the gunman who killed all these people. Be angry at gun laws that allow these guns to be purchased by 18-year-olds, where people can go to gun shows and get a gun without even registering it. There are so many things to be angry about and I think this is just misdirection.

Others pointed out that if Peterson, a trained law enforcement officer, had his fight-or-flight response kick in, then there was no conceivable way the president could expect teachers to react differently.

Others like the social media user below, expressed their sympathies, positing that Peterson was "presumably armed with a handgun" and that "(like one of Trump’s proposed teachers) he was expected, alone, to confront an attacker armed with an assault rifle." That, he added, amounts to "heroic suicide."

Another echoed some of Felicia Burgin's sentiments, saying that under Trump's proposal, teachers would "be the new scapegoats."

3- Armed teachers who @realDonaldTrump has now declared will take down the mass shooters will be held accountable i… https://t.co/6uIyR14OLY
— Rick Pilkington (@Rick Pilkington) 1519385009.0

Other people appeared to find merit in the president's criticisms, saying that more people would likely have been saved had Peterson acted. Said Lauren Noyola, a student at Marjory Stoneman Douglas who lost three close friends in the shooting: "Maybe they could’ve been saved — maybe they could still be alive if he had gone inside and tried to stop something from happening."

Other social media users agreed. "I can only assume this officer is a coward," wrote one such individual.

Peterson isn't the only law enforcement enforcer to come under scrutiny, however. The New York Timesreported that other deputies were placed on restricted duty because they may have mishandled earlier tips to the Sheriff's Office regarding Nicolas Cruz.