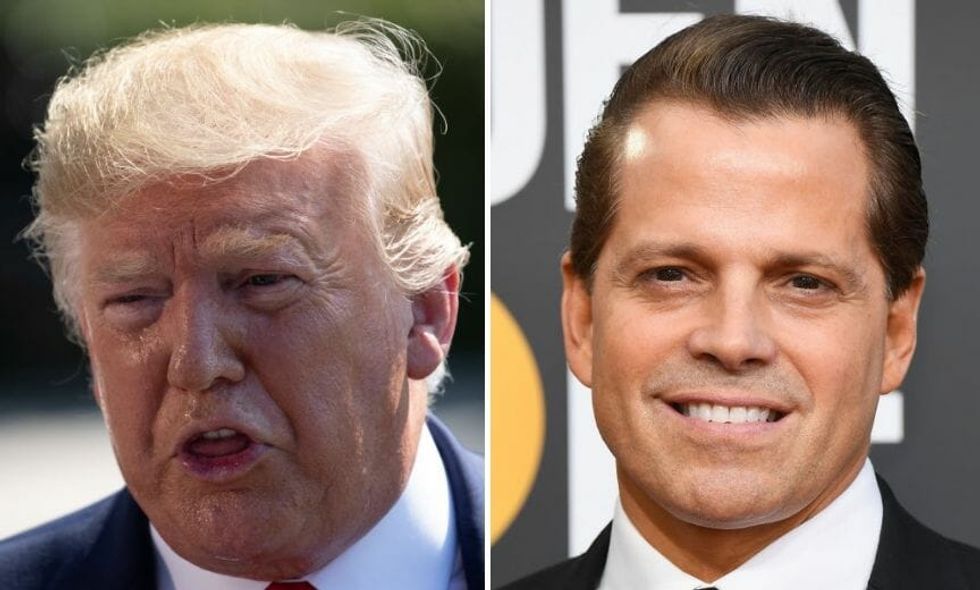 Scaramucci was fired in 2017, but continued to make the rounds on television news shows to vouch for the President—until recently. After criticizing the Trump's actions in the aftermath of two mass shootings in Dayton, Ohio and El Paso, Texas earlier this month, Trump took to Twitter to rail against Scaramucci, who soon responded with a dire warning.

For the last 3 years I have fully supported this President. Recently he has said things that divide the country in… https://t.co/HSwboC25H3
— Anthony Scaramucci (@Anthony Scaramucci) 1565521654.0

Trump is still holding a grudge.

Anthony Scaramucci is a highly unstable “nut job” who was with other candidates in the primary who got shellacked,… https://t.co/kppQGbYmQx
— Donald J. Trump (@Donald J. Trump) 1566220786.0

Scaramucci recently elaborated on what triggered his ideological shift in an op-ed for the Washington Post.

"His response to the neo-Nazi march in Charlottesville was repellent," Scaramucci writes. "I was appalled by the administration’s child-separation policy along the southern border. His ranting about the news media as the 'enemy of the people' was dangerous and beyond the pale."

"But the final straw came last month when Trump said on Twitter that four congresswomen — all of them U.S. citizens, and three native-born — should 'go back and help fix the totally broken and crime infested places from which they came.'"

Scaramucci ends by challenging Republicans to speak out against Trump and the "culture of fear" he's created.

Though Scaramucci clearly lays out his evolution and doesn't shy away from the praise he used to heap upon the President, Trump tweeted a video of "this dope" Scaramucci hours after the op-ed's publication.

And the feud continued.

Adding to that he is attacking my wife who is a civilian a private citizen, a mom of 2 young children. He is despi… https://t.co/EdOdMNeQEt
— Anthony Scaramucci (@Anthony Scaramucci) 1566304373.0

I am happy to continue taking incoming fire from @POTUS if it helps others muster the courage to speak up. If you w… https://t.co/v8cumBz3Pg
— Anthony Scaramucci (@Anthony Scaramucci) 1566305445.0

There aren't really any heroes in this story, but people knew whose side they were on.

@realDonaldTrump Why did you pick the mooch as your communications director if he was a dope? If the mooch was a do… https://t.co/JmTeMDnQO9
— John Luke Sam (@John Luke Sam) 1566306650.0

@realDonaldTrump Yeah, everyone was surprised you picked him to be your White House Communications Director. Seemed… https://t.co/S0MPIruKgI
— Kevin M. Kruse (@Kevin M. Kruse) 1566302521.0

"Only the best people," right?