Donald Trump Just Claimed That He Was Being 'Sarcastic' When He Asked Russia for Hillary Clinton's E-Mails, but That's Not What He Said At the Time 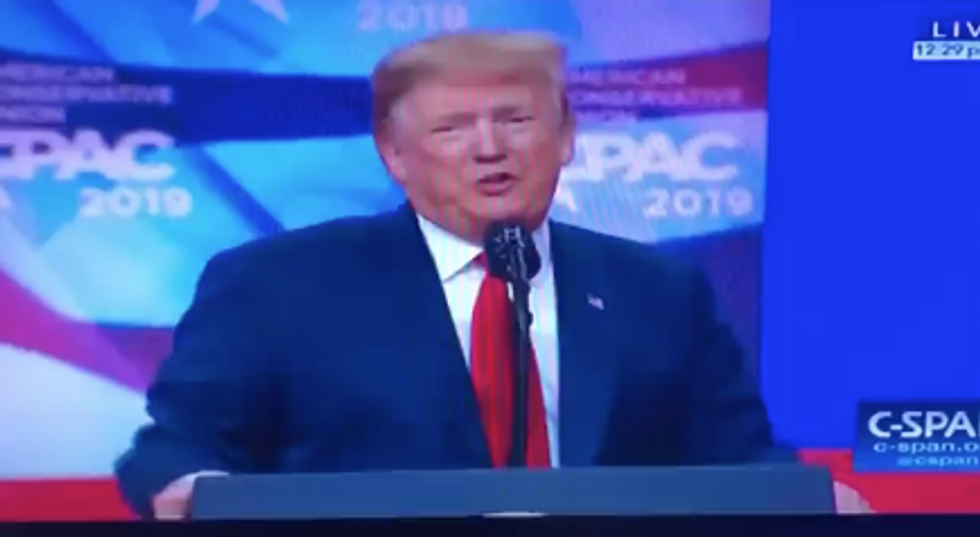 President Donald Trump on Saturday tried to downplay the time he asked Russia to hack and release Hillary Clinton's emails during a long, bizarre speech at the annual Conservative Political Action Conference (CPAC).

As the audience chanted "lock her up," Trump claimed he was being "sarcastic" and was merely "having fun with the audience" when he said that Russia would be "rewarded mightily by our press" if they found a way to publish Clinton's emails.

"So everybody's having a good time laughing, we're all having fun," Trump incorrectly recalled, "and then that fake CNN and others say, 'he asked Russia to go get the emails.' These people are sick."

If Trump thinks he can get away with such a gross rewrite of history, he is sorely mistaken.

Trump, the GOP nominee, said the following at a news conference in Florida on July 27, 2016:

“I will tell you this, Russia: If you’re listening, I hope you’re able to find the 30,000 emails that are missing. I think you will probably be rewarded mightily by our press.”

NBC's Katy Tur has the receipts of the exchange between Trump and herself in which Trump asked Russia, plain as day, to hack his political opponent.

Note that Trump was adamant in his desire to have Russia dump dirt on "crooked Hillary."

There is nothing ambiguous about what Trump said.

Trump is a Matryoshka doll of deceit.

No one was laughing then, and no one is laughing now -except for Vladimir Putin, maybe.

@KatyTurNBC @kenvogel @CPAC @HillaryClinton @CNN How does he keep his pants from being on fire? That is a genuine talent.
— Steven Sundook (@Steven Sundook) 1551557327.0

Does this mean Trump wants us to believe he faked collusion for fun? That is one ballsy defense.

"But her emails" just took on a whole new meaning.