Donald Trump Just Tried to Blame Barack Obama for 'Anything the Russians Did' in 2016, and People Can't Even 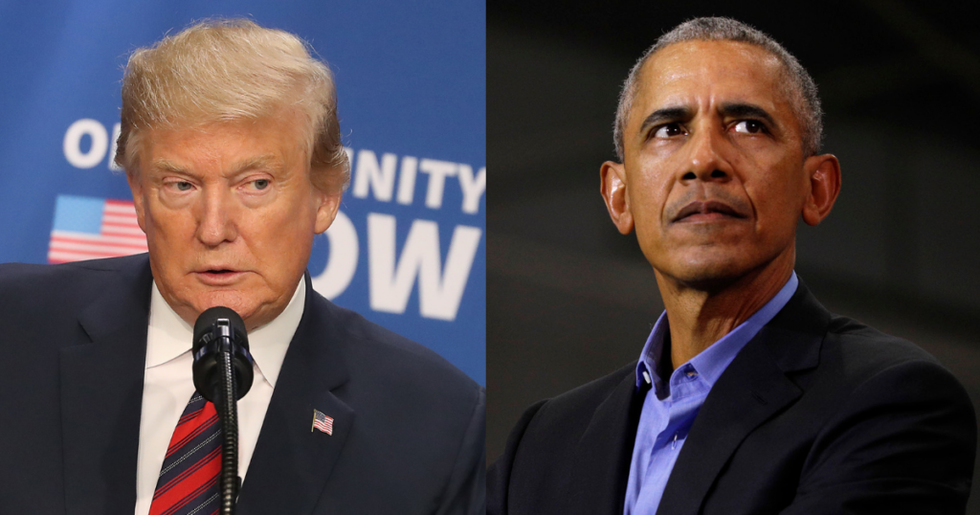 "The investigation established that the Russian government perceived it would benefit from a Trump presidency and worked to secure that outcome, and the campaign expected it would benefit electorally from information stolen and released through Russian efforts," the report states. Mueller could not establish, however, that the Trump campaign participated in a coordinated effort with the Russians.

Trump saw this as an opportunity to stick it to Obama.

"Anything the Russians did concerning the 2016 Election was done while Obama was President," Trump tweeted. "He was told about it and did nothing! Most importantly, the vote was not affected."

Anything the Russians did concerning the 2016 Election was done while Obama was President. He was told about it and… https://t.co/adGILtxyRC
— Donald J. Trump (@Donald J. Trump) 1555630103.0

Note that the president is deflecting blame onto Obama for not stopping the Russians from meddling in an election he won.

He is terrified of being viewed as illegitimate. This is peak Trump.

@realDonaldTrump you just know that a hyperventilating Donald Trump just got off the phone with Hannity and this is… https://t.co/0qnF972nF0
— Jeff Tiedrich (@Jeff Tiedrich) 1555630233.0

Trump's assertions are not true. But hey, at least he now acknowledges the Russians did it.

@realDonaldTrump You were told about it ... & you encouraged them. Obama tried to warn voters. Your pal McTurtle re… https://t.co/DxdsKcFTlI
— Khashoggi’s Ghost (@Khashoggi’s Ghost) 1555630492.0

Obama did, in fact, take action.

In December 2016, Obama expelled 35 Russian nationals after Russian election tampering efforts were confirmed by American intelligence agencies. He also imposed sanctions in response to the Russian attack on the election.

@realDonaldTrump He sanctioned the Russians. You’ve known the same things he did as well. What have you done? Oh,… https://t.co/N2VWAqnCMV
— Eric Vitiello (@Eric Vitiello) 1555686891.0

Trump was warned before the election and during the transition that the Russians were tampering with our election systems. He did nothing.

@realDonaldTrump STOP blaming Obama and do something about Russia now. You are the one who looked stupid and stood… https://t.co/zq73xURD5H
— Angelique Parks (@Angelique Parks) 1555687583.0

@realDonaldTrump It is highly likely the vote was affected. Manafort specifically asked for help in the battlegrou… https://t.co/cbUHPZgMH7
— David Rothkopf (@David Rothkopf) 1555630316.0

@realDonaldTrump There is no evidence that the vote was not affected. We don’t know either way and probably can never know for sure.
— Renato Mariotti (@Renato Mariotti) 1555630163.0

Trump won three of those states, and to date, evidence that vote totals were unaffected remains inconclusive.