Trump is literally a laughing stock. 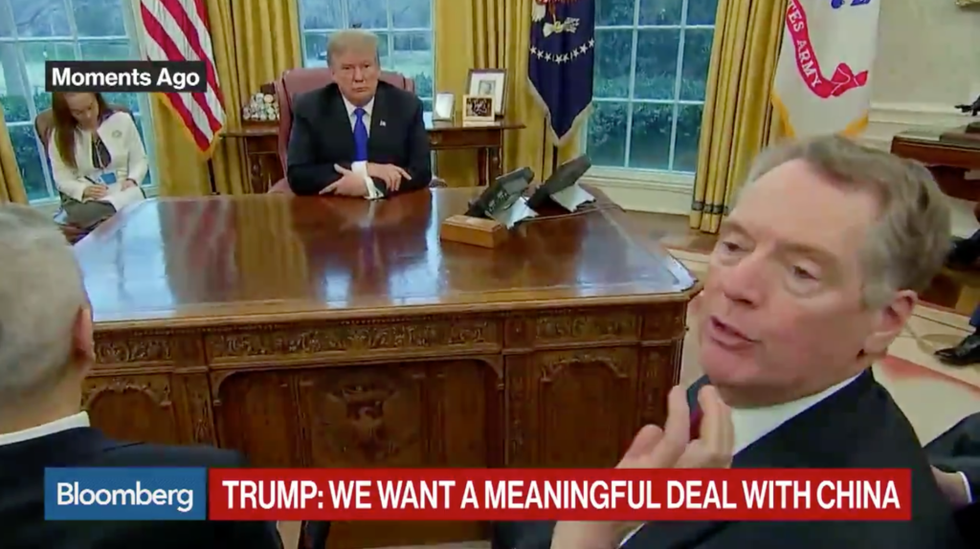 We have now reached a point where world leaders are laughing in the president's face.

Trump was asked how long "memorandums of understanding," a form of contract, would be in effect once agreements are made on trade between the US and China.

Lighthizer had to step in and correct the president to the gathered press.

“An MOU is a binding agreement between two people,” he said. “It’s detailed. It covers everything in great detail. It’s a legal term. It’s a contract.

Not according to Trump, apparently.

"By the way I disagree," Trump interjected. "I think that an MOU is not a contract to the extent that we want."

That's the point at which VP Liu let out his chuckle, at the 54-second mark below:

I mean, can you blame him?

Lighthizer tried to wrap it up to everyone's satisfaction.

“From now on we’re not using the word memorandum of understanding anymore. We’re going to use the term trade agreement,” Lighthizer said. “We’ll have the same document. It’s going to be called a trade agreement.”

“Good, I like that term much better,” Trump said.

The laugh seen 'round the world.

@realDonaldTrump Was that before or after the Vice Premier of China laughed at you right to your face?
— mizzy (@mizzy) 1551048768.0

@realDonaldTrump You made a fool of yourself over the definition of an MOU. You didn’t understand it was a contract… https://t.co/LQ7STWtAKG
— Blue New World (@Blue New World) 1551048076.0

Looks like we have to reset the "days without a national embarrassment" counter again.

@economics “A Memorandum of understanding is just that, it’s a ‘Memorandum’ of ‘understanding’” - @realDonaldTrump… https://t.co/CWhwOsZlcN
— Bryan Lowry (@Bryan Lowry) 1550957616.0

Some people wondered if Trump's warped understanding of binding contracts could come back to haunt him.

There was that one now-infamous letter of intent Trump signed in 2016...

@economics Trump is of course concerned that his MOU with the Kremlin re Trump Tower Moscow, which he signed, might… https://t.co/1GL3whvaZb
— DesGlobal (@DesGlobal) 1550977333.0

@economics RL should have explained that an MOU is not just a letter of intent like the LOI Trump signed during the… https://t.co/3kBFRq5eir
— American Moronicle (@American Moronicle) 1550966319.0

The best words and the best deals, eh?

Perhaps a retitling is in order.

So much for the art of dealmaking.