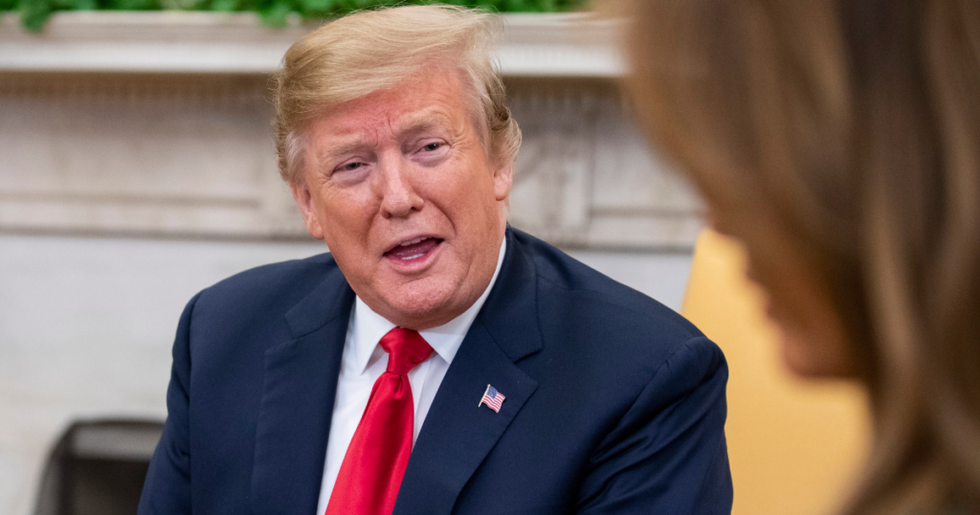 WASHINGTON, DC - MARCH 07: (AFP OUT) U.S. President Donald Trump talks with First Lady Melania Trump during a meeting with. the Prime Minister of the Czech Republic Andrej Babi and his wife Monika Babiová in the Oval Office of the White House in Washington, D.C. on March 7, 2019. (Photo by Alex Edelman - Pool/Getty Images)

Specifically, Trump was parroting Patrick Moore, a climate contrarian that who was invited onto Fox & Friends as a reward for referring to Congresswoman Alexandria Ocasio-Cortez (D-NY) as a “pompous little twit."

Moore said on Fox that Greenpeace has been “hijacked by the extreme left” to sell “sensationalism, misinformation, and fear.”

This so tickled Trump that he even added a "wow!" after quoting Moore on Twitter.

"Patrick Moore, co-founder of Greenpeace: “The whole climate crisis is not only Fake News, it’s Fake Science. There is no climate crisis, there’s weather and climate all around the world, and in fact carbon dioxide is the main building block of all life.” @foxandfriends Wow!"

"Patrick Moore was not a co-founder of Greenpeace," the group tweeted to Trump, reiterating what it has said about Moore for years. "He does not represent Greenpeace. He is a paid lobbyist, not an independent source. His statements about @AOC & the #GreenNewDeal have nothing to do with our positions."

@realDonaldTrump @foxandfriends Patrick Moore was not a co-founder of Greenpeace. He does not represent Greenpeace.… https://t.co/SsawNsrLxY
— Greenpeace USA (@Greenpeace USA) 1552393827.0

@realDonaldTrump @foxandfriends @AOC Climate deniers are trying to delegitimize it, the truth is that most people i… https://t.co/zQx8GnkWoV
— Greenpeace USA (@Greenpeace USA) 1552394046.0

The science of human-driven climate change is supported by overwhelming observational and experimental data to the point of being "unequivocal" by the Intergovernmental Panel on Climate Change. This conclusion is shared by NASA and virtually every reputable scientific body and political party in the developed world except the GOP.

Moore is a paid lobbyist whose job it is to sow doubt and drive profits for polluters.

@realDonaldTrump @foxandfriends 1) Guy didn't found Greenpeace. He was fired after working for them b/c he was a fr… https://t.co/2vayWHnj5P
— Jesse Ferguson (@Jesse Ferguson) 1552396274.0

Climate denialism and inaction imperils us all.

@realDonaldTrump @foxandfriends The world would be a much better place had you never been born. Don't get me wrong,… https://t.co/buKq438MsL
— Jeffrey Guterman (@Jeffrey Guterman) 1552393797.0

@realDonaldTrump @foxandfriends Our generation is beyond thankful that you are the last of a dying breed. You and… https://t.co/oyYSGJJZXA
— James Parkley (@James Parkley) 1552393983.0

@greenpeaceusa @realDonaldTrump @foxandfriends @AOC That’s our #STUPOTUS and his accomplice in their goal of making… https://t.co/B8pVIc9OCM
— Mike Keenan (@Mike Keenan) 1552401161.0

Thank goodness Greenpeace never backs down from a fight. There is too much at stake.

According to actual experts, we only have about a dozen years left to do anything to mitigate the damage carbon emissions are causing, although some scientists think we may already be past the point of no return.