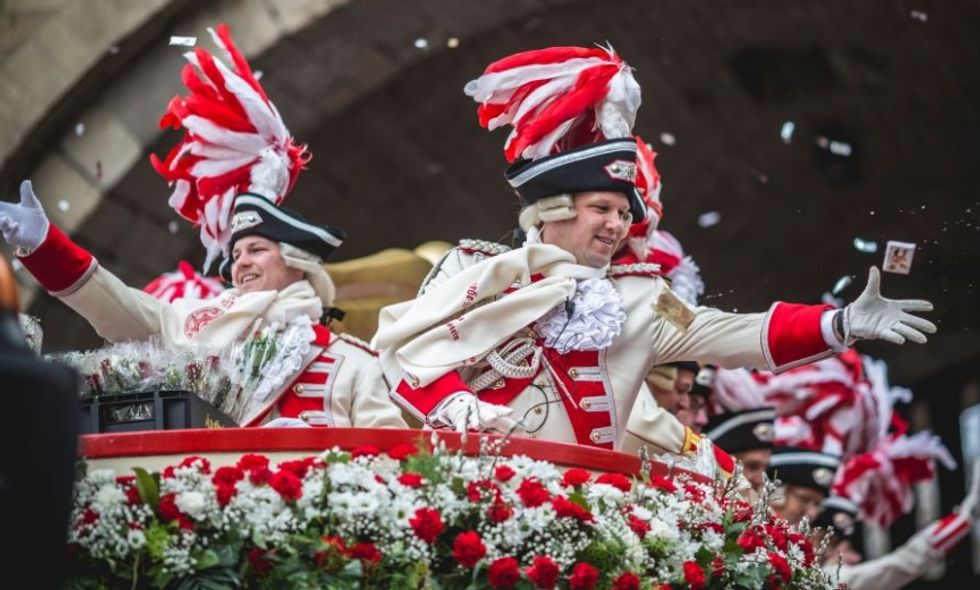 It was windy in Düsseldorf, Germany on Monday, with worse weather still to come, but that didn't stop thousands of Germans from attending the Rose Monday (Rosenmontag) parade.  the event is the highlight of Carnival, which—like Mardi Gras in the United States—represents a period of celebration  ahead of Ash Wednesday and the season of Lent.

While the events were widely joyous, there are undoubtedly some who weren't celebrating the parade: world leaders, especially United States President Donald Trump.

The parade is famous for skewering various political figures around the world with its ornate, almost explicit, floats. One of this year's floats called out Donald Trump's subservience to Vladimir Putin, with one float showing the pair ripping apart a copy of the Intermediate Range Nuclear Forces Treaty (INF) as the cities below them burn.

The float reflected similar concerns of Americans that the recent suspension of the INF Treaty is another instance of Trump acting in accordance with Putin's interests that could result in a nuclear arms race.

Odd how Russia is calling the US an "adversary" when Trump is a Russian agent controlled by Putin. Almost as if Tru… https://t.co/uZWLgpoMSX
— Hector (@Hector) 1551585041.0

As he did with Vladimir Putin and North Korean leader Kim Jong-un, Trump defended bin Salman after the murder, stressing the importance of good relations with Saudi Arabia. Trump ordered no sanctions against the country for bin Salman's brutal act.

Float designers in Germany took him to task for it.

As Trump protects bin Salman, the Prince holds the bloody chainsaw used to saw Khashoggi's body to pieces. The inscription reads, "The Murderer and his Dirty Angel."

The float reflects the consensus of American lawmakers and private citizens alike: that Trump was complicit at best in the murder of an American journalist.

@thehill And why does this shock you ? Trump isn’t concerned about this killing.
— Michael Johnson (@Michael Johnson) 1551752084.0

The President isn't the only one being blamed for his softness on bin Salman.

The President's son-in-law, Jared Kushner, is getting some heat as well. As recently as last week, Kushner met with bin Salman.

@AJEnglish I wonder what they talked about. Comparing notes on the size of their yachts, how many houses, cars or p… https://t.co/Tkifomcddr
— Julie (@Julie) 1551343385.0

A reminder that Jared Kushner, with his golden security clearance that his daddy-in law gave him, advised his murd… https://t.co/blvvPSjdYH
— Karen Attiah (@Karen Attiah) 1551394579.0

“Jared may think he can sweep the piles of cadavers MBS is responsible for under some magic carpet, but neither the… https://t.co/4GnmKFRgq5
— Sarah Leah Whitson (@Sarah Leah Whitson) 1551468030.0

No matter how tenaciously the Trump administration tries to ignore it, the stain of Khashoggi's death won't be forgotten any time soon.