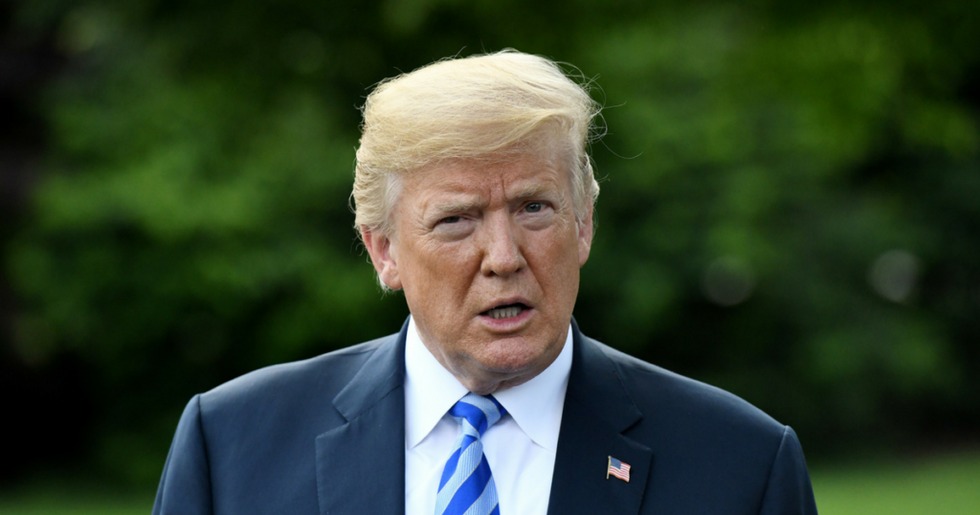 Trump has taken to Twitter to decry the many protesters who mobilized outside of the Supreme Court building and the United States Capitol, as well as those who disrupted Kavanaugh's hearing process in acts of civil disobedience.

The president is claiming these protesters were paid, presumably by Democrats.

Not surprisingly, Trump presented no evidence for these claims, but the tweet certainly reminded some of a story from 2015, when Trump himself actually did pay for people to appear at his campaign announcement event.

And of course, it was his paid supporters who had to wait to get paid.

For his 2015 campaign announcement, a firm called Extra Mile hired people to cheer for then-candidate Donald Trump as he descended the escalator to the lower lobby of Trump Tower where he announced his candidacy for President. The fake supporters were paid $50 each. The news was initially overshadowed by claims Trump made in the announcement that would go on to characterize his entire platform: Undocumented immigrants are rapists and criminals.

To exacerbate the hypocrisy, it took the Trump campaign a month after a Federal Elections Commission complaint to pay Extra Mile for the money it paid protesters and the other services it provided.

People aren't hesitating to point this out.

@realDonaldTrump Explain this Trump👇again you love throwing rocks but you have done the same thing at your rallies.… https://t.co/ZJqoLvwKZa
— Mrs.Scales #Resist (@Mrs.Scales #Resist) 1539096388.0

And past the hypocrisy, other voices are explaining to Trump why they don't expect payment for protest.With each major atrocity from the Trump administration--be it defending Nazis, locking children in cages, or most recently appointing a judge with multiple sexual assault allegations to the Supreme Court--the president's critics have been quick to mobilize.

Now, they're telling Trump why.

@realDonaldTrump The difference between Democrats and Republicans is that Republicans only come out for the Dollars… https://t.co/gkKxXH9wqw
— Nevi Zsalk (@Nevi Zsalk) 1539095914.0

With the crucial 2018 midterms less than 30 days, others warned the president that the price he'll pay for his actions in office will come when they cast their votes.

@realDonaldTrump This is a lie. You are a liar. Without any evidence you are floating a conspiracy with dangerous c… https://t.co/UMm9dWUGR9
— Frederick C. Trump (@Frederick C. Trump) 1539088682.0

@realDonaldTrump Hey Don, Just how exactly is nonsense like this healing this divided nation that you claim to lov… https://t.co/aR0BKtdRkm
— John Pavlovitz (@John Pavlovitz) 1539095768.0

The president has yet to elaborate on where he obtained information that Democrats are paying protesters and it's likely he won't be pressed to.