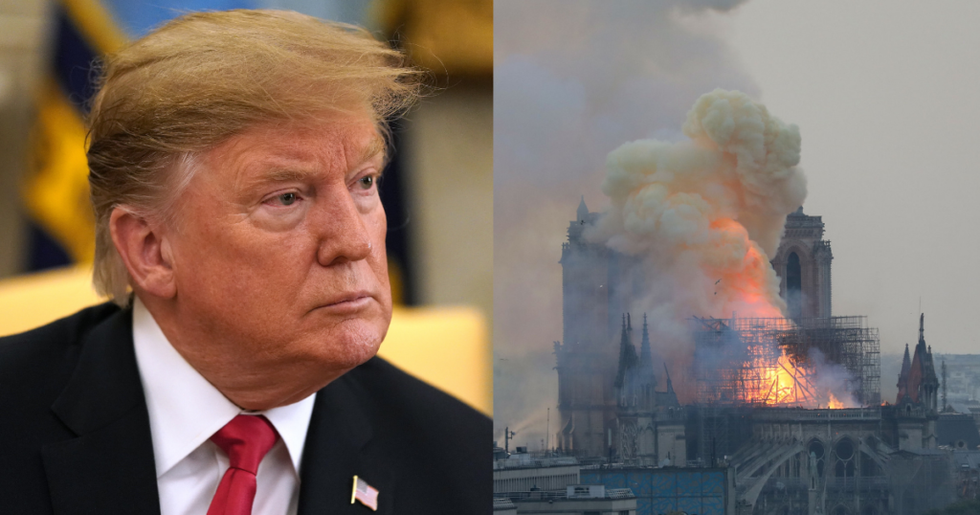 So when President Donald Trump felt the need to chime in, tweeting that firefighters should employ "flying water tankers" to quench the blaze, Twitter was having none of it.

@realDonaldTrump It's 700 years old, but hitting it with thousands of gallons of water from the sky shouldn't cause too much damage.
— Mike Pawlowski (@Mike Pawlowski) 1555350529.0

Trump demonstrated his fire expertise last fall when he suggested that a lack of raking causes forest fires.

Trump also credited "bad environmental laws" and water being "diverted into the Pacific Ocean" for the rash of wildfires that swept through California.

California wildfires are being magnified & made so much worse by the bad environmental laws which aren’t allowing m… https://t.co/V94EEYqoHv
— Donald J. Trump (@Donald J. Trump) 1533592422.0

Stay in your lane, Donald.

The blaze began around 7 p.m. (France time) in a section of roof that was undergoing renovations. The 750-ton spire in the center of the structure - added right over the altar in the 1860s - collapsed roughly an hour later as the flames continued to spread.

The rest of the roof imploded shortly thereafter, according to eyewitnesses. An investigation has been opened to determine what sparked the inferno at the world's preeminent example of French Gothic architecture.

Cathedral officials said that the interior wooden framework and iconic stained glass are completely destroyed and there are efforts underway by first responders to salvage irreplaceable relics and artwork. As of this publication, witnesses report that the flames have spread into the familiar twin stone bell towers and continue to burn.

Prior to arriving on the scene, French President Emmanuel Macron said in a statement he is "sad to see this part of us all burn." He is treating the fire as a national emergency and has committed to using all available means to combat the blaze - except for airdropping water, which authorities say would further endanger the structure.

MSNBC has reported that officials from the French Interior Ministry are saying Notre Dame Cathedral probably cannot be saved. The loss from the fire may be total.

Notre Dame Cathedral has been "saved from total destruction," officials say, noting that first responders were able to salvage the stone edifices of the 14th century building. One firefighter was "seriously" injured battling the blaze.

Macron called upon the world's best architects and engineers to help restore Notre Dame. "We will rebuild," he said at a press conference.