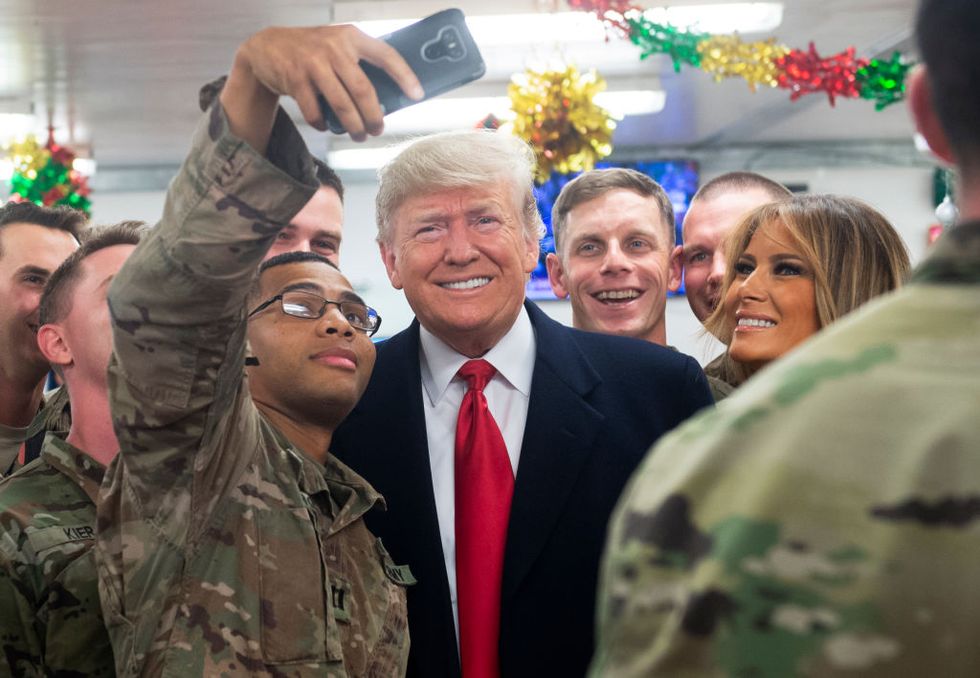 TOPSHOT - US President Donald Trump and First Lady Melania Trump greet members of the US military during an unannounced trip to Al Asad Air Base in Iraq on December 26, 2018. (Photo by SAUL LOEB/AFP/Getty Images)

After years of criticism for failing to do so, President Donald Trump visited a combat zone for the first time in his presidency. Trump made a surprise visit to troops at Al Asad Air Base in Iraq late Christmas night.

Trump's remarks to troops in the region were notably similar to one of his campaign rallies, with calls for walls and blame for Democrats. What's more, he added another lie to the over 5,000 false statements he's made during his presidency.

While speaking to troops, the President claimed he had

As Ali Rogin points out the military has not only gotten a pay raise every year, but the combined percentages of the increases under Trump only give a five percent boost, not 10 like he'd claimed. The lie earned Trump a prestigious "Pants on Fire" rating from Politifact for excellence in falseness.

It wasn't long before Twitter users began calling him out.

@AliABCNews @PolitiFact Does he think the people he was talking to have never looked at their own pay stubs?!?
— Lisa Lunsford (@Lisa Lunsford) 1545863425.0

@AliABCNews @PolitiFact What we saw was a campaign rally disguised as a visit to the troops.
— James Lee Katz (@James Lee Katz) 1545872972.0

@AliABCNews @PolitiFact Does he think members of the military are clueless about their own pay raises?
— nan (@nan) 1545864500.0

They were grateful to Rogin for something in particular as well.

They commended the ABC News reporter for her willingness to call the statement a lie.

However, many weren't surprised that Donald Trump was lying yet again.

Though the president finally visited a combat zone, his willingness to lie to the troops makes one wonder if he acknowledges the gravity of their sacrifices.