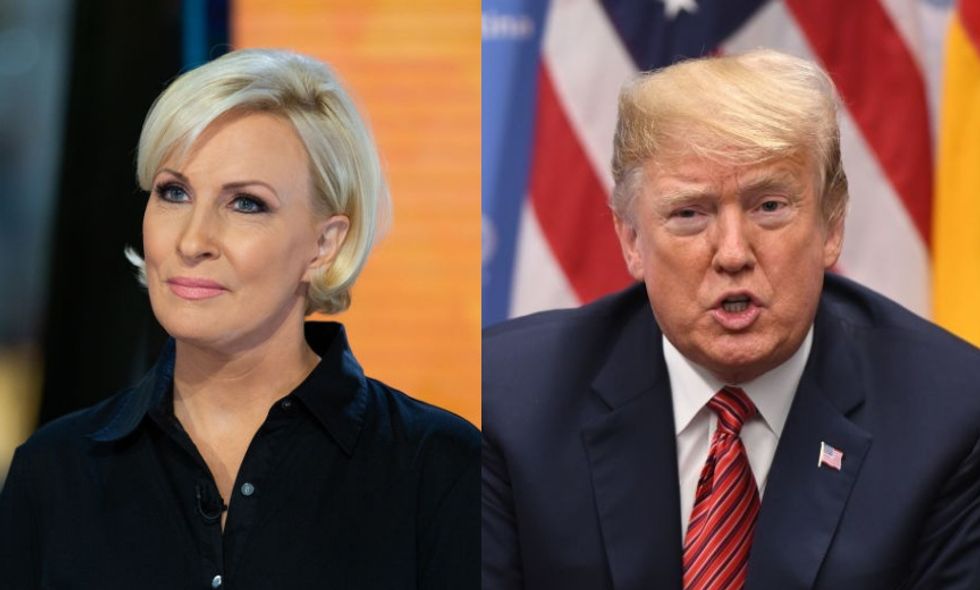 Devout Trump critic and host of MSNBC's Morning Joe Mika Brzezinski found herself in hot water after referring to Secretary of State Mike Pompeo as a "wannabe dictator's butt boy."

The term is widely considered to be antigay and the network tried to censor her usage of it, but failed.

Brzezinski tweeted that the remarks were a "super bad choice of words," but Richard Grenell, President Donald Trump's ambassador to Germany, was outraged at the comments.

accepting apologies is important. We all fail. But I don’t see that you’ve actually apologized to gays? Your words… https://t.co/hRnCFgyGDV
— Richard Grenell (@Richard Grenell) 1544641072.0

It was then that the President—who once accused Brzezinski of "bleeding badly from a facelift"—pounced on Brzezinski's words.

If it was a Conservative that said what “crazed” Mika Brzezinski stated on her show yesterday, using a certain horr… https://t.co/UKC0kqLnSZ
— Donald J. Trump (@Donald J. Trump) 1544722454.0

Commentators, television shows and news organizations often put Trump and his allies in imaginary gay relationships as a way to show submission of one to the other. Too often, the same-sex factor of the comment becomes just as much of a punchline as Trump's submission to Putin or other world leader. The New York Times recently came under fire for this, as has Saturday Night Live.

This morning was Brzezinsky's first day back on Morning Joe since the incident (she had a family matter the day after it occurred). She apologized to viewers more fully on camera:

"I wanted to address a term that I used on this show on Wednesday that was vulgar. I knew it right away and I tweeted that it was a terrible choice of words and that I was sorry. But please allow me to say this face to face: The term is crass and offensive and I apologize to everyone, especially the LGBTQ community and to my colleagues...I will work hard to be better, but I just wanted to say on camera, looking the viewers straight in the eye, I am really really sorry."

Watch the full apology below:

However, with the President having already tweeted on the matter, his supporters—who weren't exactly championing LGBT rights yesterday—seemed to suddenly be passionate about the cause.

Many dismissed Brzezinsky as a homophobe.

Just curious as to why a homophobe like Mika Brzezinski is still on air but "Racist" Roseanne immediately lost her… https://t.co/wNbeQoNwCz
— thriftymaven (@thriftymaven) 1544718488.0

@mrowlitor Actually sounds like Mika Brzezinski is the homophobe. And the hypocrisy is she will continue to have a… https://t.co/JfZBfHofAX
— TRS (@TRS) 1544757908.0

The criticisms were coming from members of the same party who rail against so-called political correctness. Some were still in Brzezinski's corner.

@washingtonpost Conservatives crying double standard. But there is a difference. A conservative can use a slur with… https://t.co/vCVRMTPPwt
— Liam Hancock (@Liam Hancock) 1544797505.0

Though Brzezinski's words were ill-advised, at least she directly and unequivocally apologized for them. Wish the same be said for the President of the United States!