Donald Trump Went After Former Ukraine Ambassador on Twitter as She Testified, and Hillary Clinton Just Called Him Out 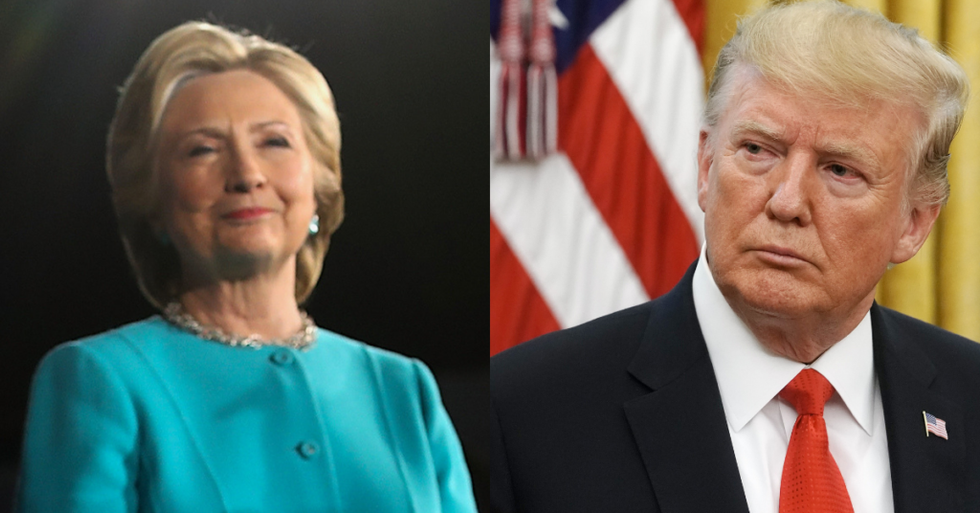 Friday morning, during the second day of public impeachment hearings, Former Ambassador to Ukraine Marie Yovanovitch -- whom Donald Trump recalled after a concerted smear campaign by Rudy Giuliani and his associates -- testified in front of the Intelligence Committee.

About an hour into Yovanovitch's testimony, during which she expressed her feeling "threatened" by Donald Trump's comments to the Ukrainian President that she was "going through some things," Trump took to Twitter to try to counter her testimony, saying:

Chairman Adam Schiff read the tweet to Yovanovitch in real time and she responded:

"I don't think I have such powers, not in Mogadishu and Somalia and not in other places.""I actually think that where I've served over the years I and others have demonstrably made things better, you know, for the US as well as for the countries that I've served in."

You can watch her response below:

Marie Yovanovitch responds to Trump's tweet attacking her during her testimony: "I actually think that where I've s… https://t.co/gG82Hh5tWo
— Axios (@Axios) 1573832456.0

Adam Schiff later called it "witness intimidation in real time by the President of the United States."

People felt she was quite impressive in the moment.

@axios A very truthful and straightforward response to the trash tweets from POTUS, during her testimony. Trump see… https://t.co/NYEEEUq88R
— Matt (@Matt) 1573834120.0

Hillary Clinton weighed in on Twitter, echoing that yes, this was in fact witness intimidation by the President of the United States.

People joined in the chorus.

@HillaryClinton And it’s not the first time Trump intimidates witnesses. He must be held accountable. #ImpeachingHearings
— David Weissman (@David Weissman) 1573835896.0

@HillaryClinton I think you might want to include Ambassador Yovanovitch in your sequel to Gutsy Women.
— abbie (@abbie) 1573837430.0

@HillaryClinton To falsely malign, attack, and intimidate Amb. Yovanovitch while she testifies shows what a liar an… https://t.co/AohS7saR0w
— Layla Fanucci (@Layla Fanucci) 1573839109.0

People are calling for Trump to be held accountable for actively berating a witness to his 66 million followers as she testified on national television.

Well, with his tweet, Trump has succeeded in making this an even more incriminating hearing than it already was.
— Jon Favreau (@Jon Favreau) 1573831635.0

Trump later diverted to tweeting in defense of his former advisor, Roger Stone, who was convicted on Friday on seven criminal counts. One of them was for witness tampering.